India should be bigger than China in power and scope… 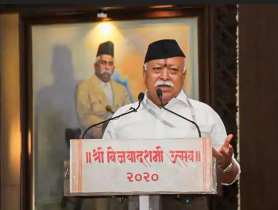 Speaking at the ‘s annual Vijayadashami rally here which was broadcast online and attended 50 swayamsevaks (volunteers) due to the Covid-19 guidelines.

Many countries are now standing up to China, he said. “China was shocked at Indias response to its intrusion. India needs to grow bigger in power and scope than china,” he said.

“China encroached on our borders amid the pandemic,” he said, adding the world knows the expansionist nature of that country. He cited Taiwan and Vietnam as examples of the Chinese expansion plans.

“We intend to be friendly with all. This is our nature. But mistaking our benevolence for weakness and attempts to disintegrate or weaken us by sheer brute force is unacceptable. Our detractors must know this by now,” he said.

Bhagwat said the Citizenship (Amendment) Act (CAA) is not against any particular religious community, adding “some people misled our Muslim brothers” claiming it was aimed at restricting their population.

Before the issue could be discussed further, the focus shifted on coronavirus, he said. “The communal flare in minds of a few people stayed in their minds only. Coronavirus overshadowed all other topics,” he added.

“We need not fear coronavirus, but should be alert and cautious. We cannot stop living. Coronavirus is spreading but fatalities are less. Due to the pandemic, we have started learning the importance of hygiene, cleanliness, environment, family values all over again,” he said.

“Coronavirus has given rise to challenges of unemployment. Many lost jobs and labourers are now returning to cities. But the jobs may not be there. The challenge is to create employment opportunities in different places,” he said.

Bhagwat said before the pandemic, several issues which were in the public discourse took a backseat.

“Article 370 was abrogated, the country accepted the Supreme Court verdict on Ram temple with patience and understanding,” he said.

“There was opposition to CAA claiming it was being used to check the Muslim population in the country. In fact, no Indian citizen was threatened due to CAA. Before any step could be taken to resolve the issue, the coronavirus pandemic happened,” he said.

Bhagwat said when the Sangh says Hindustan is “Hindu Rashtra”, it does not have any political or power-centered concept in its mind.

“Hindutva is the essence of this Rashtras Swa (self-hood). We are plainly acknowledging the self-hood of the country as Hindu because all our socio-cultural practices are directed by its principles with their spirit percolating in the personal, familial, professional and social life of each one of us,” he said.

The RSS chief said the term Hindutva has been “distorted” by appending a ritualistic connotation to it.

The Sangh does not use it to refer to this misconception. “To us, it is the word expressing our identity along with the continuity of its spirituality based traditions and its entire wealth of value system in the land of Bharat,” Bhagwat said.

“Therefore, the Sangh believes it is the word applicable to all 1.3 billion people who call themselves the sons and daughters of Bharatvarsh whose every day life is striving towards an alignment with its moral and ethical code and who are proud of the heritage of their ancestors who successfully traversed the same spiritual landscape since time immemorial,

” Bhagwat said. He said being oblivious to the true meaning of this term weakens the thread that integrates us with this country and society. “It is for this reason that this term is the first target of castigation by those who instigate inter-group conflicts, who are bent on splitting our country and society,” he said.

By presenting as separate our diversities which are traditionally accepted, respected and are a part of larger scope of Hindu philosophy in reality, they try to convert them into a source of alienation or separatism, Bhagwat said.

“Hindu is not the name of some sect or denomination, it is not a provincial conceptualisation, it is neither a single castes lineage nor the privilege of the speakers of a specific language.

“There may be some who have an objection in accepting this term. We do not object their using other words if the content in their mind is the same,” he said.

However, in the interest of the country’s integrity and security, the Sangh has over the years humbly assimilated the colloquial and global interpretations of the term Hindu, Bhagwat said. He further said being Hindu does not require giving up one’s faith, language, land or any other identity marker. It only mandates an abandonment of the quest for supremacy.

“One has only to be alert and keep away from the selfish and hateful forces who confuse and instigate people by showing them false dreams of supremacy, encourage radicalism and foster separatism,” he said. Dwelling on the COVID-19 outbreak and lockdown, he said India stood strong in the face of adversity and dealt with the calamity effectively.

“There are some reasons why we escaped corona debilitation that few countries could not. Our governing and administrative agencies promptly sprung up in action. They cautioned citizens, created emergency task forces and efficiently implemented control measures,” the RSS chief said. Government officials, medical practitioners, police officers, municipality workers and cleaners displayed an extraordinary sense of responsibility by dedicatedly serving the infected patients, he said. Citizens of the country too mobilised private resources and left no stone unturned in offering all possible help to their fellow beings, he noted.

“The larger picture was that of sensitivity, cooperation and mutual trust between governmental administrative agencies and society,” Bhagwat said.

He also talked about reflecting on the centuries’ old culture ethos of the country. “Many of our traditional habits pertaining to cleanliness and hygiene, healthy lifestyle and strengthening immunity with the science of Ayurveda also proved to be useful in this period,” he said. Bhagwat asked for restarting educational institutions, compensating teachers, resending students to their schools and colleges while paying fee for the same.

He noted that in cases where families are facing deprivation, stress creeps up in the households. To prevent negative dispositions like crime, depression and suicide, there is an extensive need of counselling and support services at this time, he said.