EC files FIR against BJP candidate from Gauripur in Assam for defaming ‘beef remark’ against Hindus.

The development came after the BJP candidate from Gauripur during an election campaign in a minority dominated area said that ‘beef’ is the ‘National Dish’ of India.

Mrignayani  Basumatary | HENB | Dhubri | March 25, 2021::  The Election Commission of India EC has lodged an FIR at the Gauripur Police Station against BJP candidate Banendra Kumar Mushahary for his recent comments, where he claimed that beef is the “national dish” of India. The development came after the BJP candidate from Gauripur during an election campaign in a minority dominated area said that ‘beef’ is the ‘National Dish’ of India. He further claimed it to be an international dish that cannot be banned in Assam or anywhere in the country. Mushahary further added, “The beef that we eat how can it be banned?

Mushahary’s comment has also enraged various organisations, among them was Purbanchal Hindu Oikya Mancha, who on Tuesday, registered an FIR at the Dispur Police Station, and demanded that immediate actions should be initiated against Mushahary for violating the model code of conduct in poll-bound Assam.

The Purbanchal Hindu Oikya Mancha, a non-RSS & non-VHP & Non-BJP body,  further questioned in the FIR that how a candidate can give such comments to attract voters of a particular community while hurting the sentiments of another community, while the MCC is in force. The Purbanchal Hindu Aikya Mancha also accused the BJP candidate of spreading hatred and inciting enmity between two religious communities in Assam. Reports also suggest that Mushahary has made this statement in order to appease the minority population in the Constituency. However, it did not go down well with Local Hindu bodies who also demanded an apology from the BJP candidate.

The members of Purbanchal Hindu Aikya Mancha have registered an FIR against the leader at Dispur Police Station, Guwahati. In the FIR, the Hindu group has stated that Mushahary has tried “to garner votes of a particular community by hurting the sentiments of another community.” 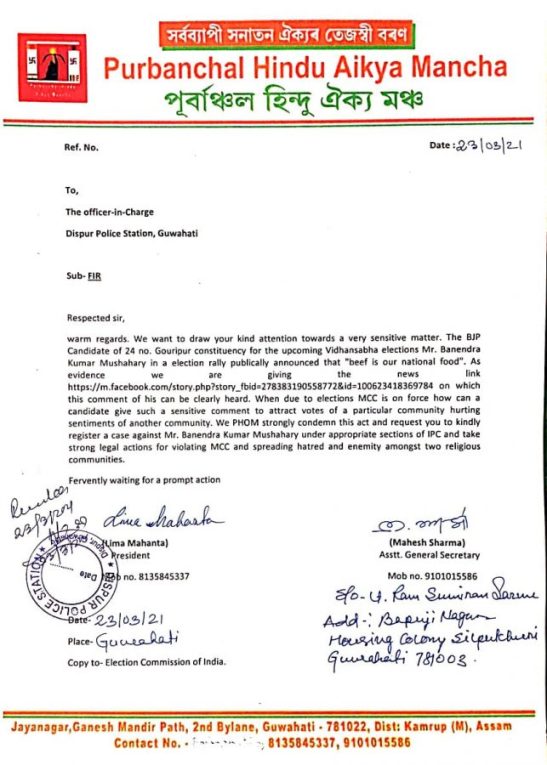 The Purbanchal Hindu Aikya Mancha has further forwarded the concern to the Election Commission of India (ECI).

“At a time when we are trying to address cow killings, whatever he has said, it is not right, ” Lima Mahanta, President of Purbanchal Hindu Aikya Mancha told HENB.

A section of BJP workers in Dhubri district have also raised serious questions on Mushahary’s statement at the election meeting in Gauripur and demanded that the BJP candidate should immediately tender his apology.

It needs to be mentioned here that Mushahary joined the BJP last year in December.  The Bodo leader was first elected to the Assam Legislative Assembly in 1996 as an independent candidate from the Gauripur constituency in the Dhubri district. Mushahary was elected again as an Asom Gana Parishad (AGP) candidate in 2011 from Gauripur. Now, he is in the fray as a BJP candidate this time.

It is significant that while big brothers in Hindu organizations, the RSS & VHP have no say against the culpable BJP leaders and election candidates, obviously inflow in BJP from various sides gradually lessens its control over party leaders and cadres in conflicting situations of ideologies putting those in double standards also.