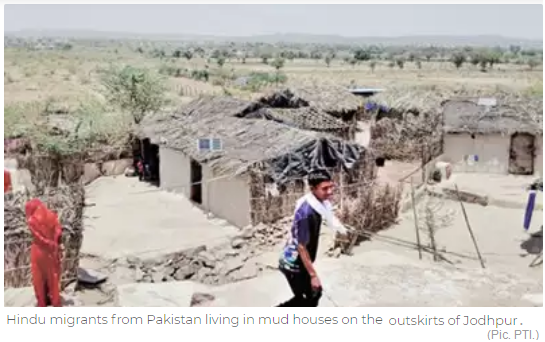 Rupa Nath |HENB | Jaipur | may 12, 2021:: The amendment in the Indian citizenship act, one of BJP’s prime points in its agenda failed to give any positive benefits to the Hindu migrants from Pakistan living at least eight locations in Rajasthan fell victims of Covid-19 in a very inhumane treatment to them.

Baser Mal from Sindh in Pakistan, who was living as a refugee, died of Covid-19 on May 2 in his makeshift mud house on the outskirts of Jodhpur. Before Mal, another Hindu, succumbed to corona virus infection, he was taken to two private hospitals in Jodhpur only to be denied a bed due to his non-citizen status.

The ongoing pandemic has spelled trouble for the Hindu migrants from Pakistan living in eight districts of Rajasthan. They are struggling for beds, vaccines, insurance cover and free ration provided by the state due to their foreign status. Since March 20, seven of them have died in Jodhpur, which has 2,500 such families waiting for Indian citizenship for the last 5-15 years.

Mal had crossed over to India in 2007 after facing religious persecution in Pakistan for years. He came on a religious visa along with his wife and two children and remained a refugee till he died for want of proper medical aid.

“The hospitals asked for his ID proof when we took him there on April 26. Even for his RT-PCR test, we had to use our connections in the administration. This is how those who don’t have Indian citizenship struggle for basic facilities,” said Dr Rajkumar Bheel, who is a close relative of Mal. Bheel, a dentist from Hyderabad in Sindh, is among the very lucky few to have accorded Indian citizenship in 2016.The Foreigners’ Registration Office (FRO) said 22,100 migrants, who have applied for citizenship, are living in shanties with no proper facilities. They have become vulnerable to Covid-19.

The number of casualties among these unlucky souls is very high, says Hindu Singh Sodha of Seemant Lok Sangathan that works for the rights of migrants from across the border. “Neither they are protected under free food schemes, nor any state insurance/health schemes. They are left to fend for themselves in the most brutal manner, which is a matter of collective shame,” said Sodha.

Bheel said the absence of an Aadhaar card is preventing the local authorities from getting them vaccinated.

In a recent letter to the state government, Sodha had suggested that the migrants be allowed to be vaccinated on the basis of their Pakistan passport, long-term visas and FRO registration documents.

Reacting to the plight of the migrants, Jodhpur district magistrate Inderjeet Singh said the authorities had been providing every assistance to them under their mandate.

“I have written to higher authorities, seeking their guidance in providing the migrants vaccination and benefits under social welfare schemes. I am awaiting their response,” said Singh.

The power to exempt any rule for their vaccination is vested with the Centre, said Antar Singh Nehra, district collector, Jaipur.

So much heard of CAA (Citizenship Ammendment Act) in the BJP’s election campaign to woo the voters but no work so far done at ground level to rescue the Hindu migrants or refugee from Pakistan however forced to the leave that Islamic country under utter persecution there.

A blame game between ruling Congress and BJP in Rajasthan has been started after Corona deaths in  Pak Hindu migrants in the state, but this earns a disrepute of Indian ethos, ‘Atithi Devo Bhava’ (अतिथिदेवो भव) – i.e. Guests are equivalent to God.

But, don’t know whether these vulnerable Hindu migrants from Pakistan in Rajasthan are now appeared as villain to both of Congress and BJP for their political rivalry?