We want model Hindu temples in every upazila and holiday in Ratha Yatra: Bangladesh Hindu Mahajot. 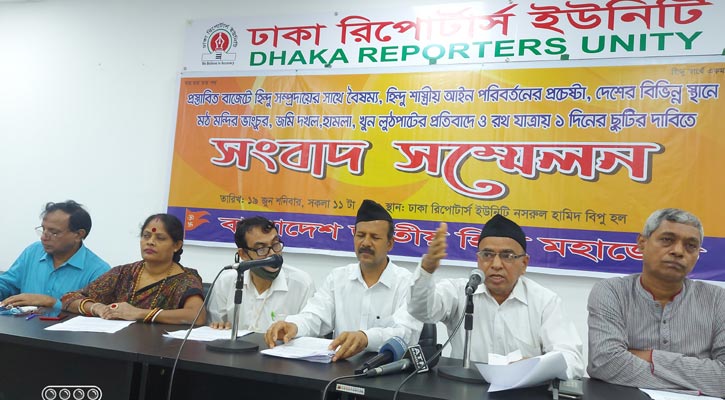 Ranesh Singha | HENB | Dhaka | June 20, 2021:: Bangladesh National Hindu Grand Alliance (Bangladesh Jatyia Hindu Mahajot)  demanded model temples in every upazila (sub-district). At the same time, they demanded an increase in the allocation for the minority Hindu community in the proposed revised budget meant for the development of religious communities in Bangladesh.

The organization placed the demand at a press conference in a Hall of the Reporters’ Unity office in Dhaka on Saturday , June 19.

Advocate Gobinda Chandra Pramanik, secretary general of the Bangladesh Jatiya Hindu Mahajot, conveyed in a written statement at the press conference that the proposed budget for religious development was discriminatory by allocating less for the minority Hindu community. The organization also  demanded one day holiday  in the Rath Yatra, torture and to stop  assault, murder, looting, arson against the minority Hindu community across the country. Adv Pramanik was demanding the redressal of vandalism, land grabbing and forced emigration of the minority Hindu people of Bangladesh.

At the press conference, Hindu Mahajot presented 5 point demands to the government. The demands are:

The Bangladesh Jatyia Hindu Mahajot  placed their demands to the BD Govt  to  have to fulfill the demands 1, 2 and 3 and other demands or to make a clear announcement on the implementation for the demands . Otherwise, the Hindu community will hold human chain and demonstration programs in every district and upazila/sub-district (there are 492 sub-districts in Bangladesh at present) of the country and announce the next program, as told in the press conference.

Hindu minority and other ethnic minorities in Bangladesh (erstwhile East Pakistan) have been the merciless victims of Islamist fundamentalism since the partition of India in continuation. There were 24% – 32% Hindus in East Pakistan according to various estimation and sources. But, the number of Hindus came down to mere 7% – 9% in recent Bangladesh very unfortunately.

One comment on “We want model Hindu temples in every upazila and holiday in Ratha Yatra: Bangladesh Hindu Mahajot.”