China gets new World Heritage Site in Quanzhou of Fujian with links to Hinduism and Tamil Nadu.

Indian PM Narendra Modi and Chinese President Xi Jinping had agreed to establish “sister-state relations” between Tamil Nadu and Fujian during the latter’s visit to Mamallapuram in October, 2019.

Sutirtho Patranobis | HT Online | New Delhi | July 25, 2021:: As many as 22 sites in the southeastern Chinese city of Quanzhou including a temple with links to Hinduism were included to the Unesco World Heritage List on Sunday.

The new listing of “Quanzhou: Emporium of the World in Song-Yuan China” by the world’s top cultural organisation boosts the credentials of Chinese President Xi Jinping’s maritime silk road, the sea route part of the Belt and Road Initiative’ (BRI), which aims to link China with Asia and beyond through infrastructure projects on land and sea.

China has been promoting the coastal province Fujian and the city of Quanzhou as an important ancient sea trade zone where multicultural communities including from Tamil Nadu mingled a millennia ago.

Xi served as governor of Fujian between 1999 and 2002, and also visited Quanzhou.

The listing decision was made on Sunday during the Unesco World Heritage Committee’s 44th online session chaired from Fuzhou, the capital of Fujian, the same province where Quanzhou is located.

Indian Prime Minister Narendra Modi and Xi had decided to establish “sister-state relations” between Tamil Nadu and Fujian during the latter’s visit to Mamallapuram for the second informal summit in October, 2019 – it was because of Quanzhou’s ancient links with Tamil Nadu.

Key sites in the listing include Kaiyuan Temple with Hindu and Buddhist links, Luoyang Bridge, Qingjing Mosque, one of the oldest mosques in China and an archaeological site of an old maritime trade office, said to have been first established in 1087, according to state-run China Daily newspaper. 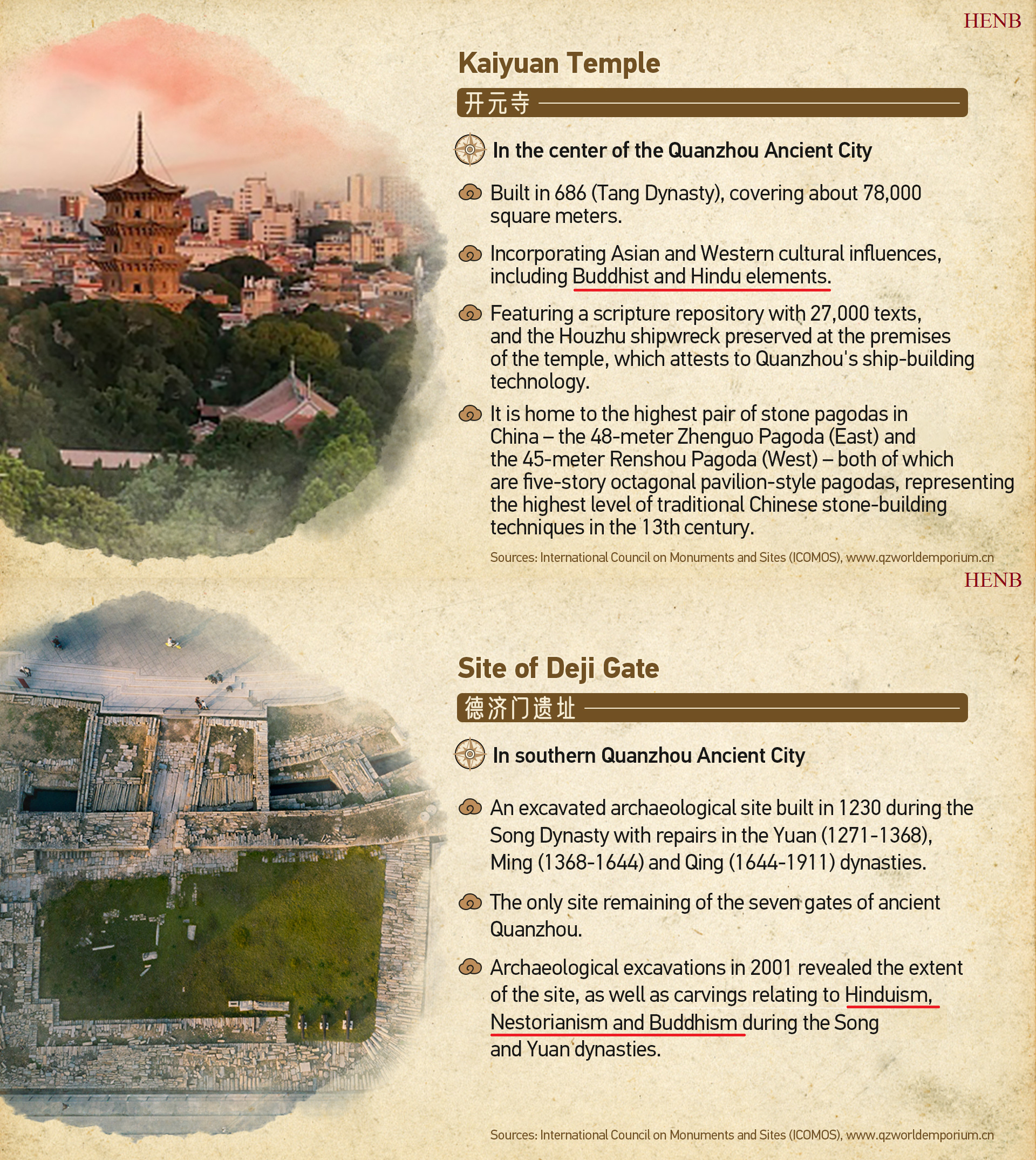 China’s submission document to Unesco applying for Quanzhou’s heritage status, surprisingly, did not specifically mention the city’s ancient links with Tamil Nadu but only mentioned Hinduism.

“Historic monuments and sites of ancient Quanzhou (Zayton)” is directly associated with the significant events of (Chinese general) Zheng He’s voyages to the west and tangibly associated with the spread of Islam, Manichaeism, Hinduism, and Nestorianism in the southeast coastal area of China,” the document said.

Wang Liming from the Quanzhou Maritime Museum shared more details. “Today, anyone who talks about the relationship between ancient Hinduism and China cannot do without mentioning the city of Quanzhou…Its past prosperity left the city with a great number of precious cultural relics. Among them, the carving art of Hinduism presents people opportunities to understand Hindu scriptures and myths and exhibits the friendly exchanges between Quanzhou and India’s Tamil Nadu which started more than 1,000 years ago,” Wang wrote in a recent article, which she shared with HT on Sunday.

“With Quanzhou’s growing popularity globally, people with different religious beliefs from all over the world came to the city. While Christianity, Islam, and Judaism arrived one after another, Hinduism also came with Indian merchants. Followers built magnificent Hindu temples and sacrificial altars in the metropolis,” Wang wrote.

The temples, however, have gradually been destroyed.

About a specific temple, Wang wrote: “Today, this very temple, which was described as ‘extremely magnificent’ in the local historical annals, has long been destroyed. Although it is impossible to see its original appearance, a large number of exquisite stone carvings have been unearthed in Nanjiaochang, where the temple was probably located. Hindu architectural components have also been found at many locations in the city.”

Following Sunday’s listing, China now has 56 Unesco World Heritage sites, one less than Italy with the most such locations globally.

This article first appeared in Hindustan Times online on 25/07/2021 and was edited by Amit Chanda.