BJP is bringing Hindutva politics into focus in AP. 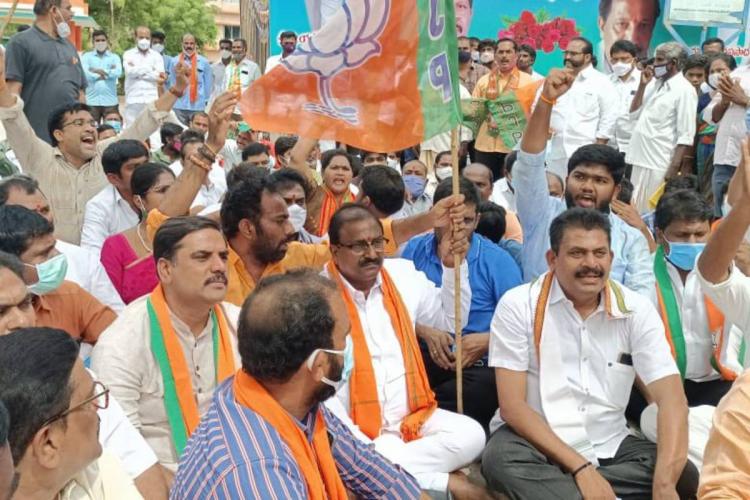 Jahnavi Reddy | The News Minute Online | Hyderabad | July 28, 2021:: The Andhra Pradesh unit of the BJP called for statewide protests on July 28, Wednesday, on the issue of cow slaughter prohibition. The protests were organised in the wake of comments by YSRCP MLA from Yemmiganur K Chennakesava Reddy, who reportedly called the cow slaughter prohibition law outdated, and defended cow meat consumption as a mere dietary choice for several communities. The MLA has since said that his statement was his personal view, and not that of the YSRCP. Yet, BJP workers tried to surround the MLA’s house earlier on Sunday, and Veerraju called for statewide agitations at all District Collectors’ and tahsildar officers on Wednesday.

A day earlier, on July 27, Andhra Pradesh BJP president Somu Veerraju, undertook the ‘Chalo Proddatur’ programme to oppose the plan to install a statue of Tipu Sultan in Proddatur town of Kadapa district, calling it an anti-Hindu move. Since the YSRCP government came to power about two years ago, the BJP has repeatedly attempted to raise various issues around Hindutva politics. BJP leaders have repeatedly accused the Jagan government of encouraging forced religious conversions in the state, although no clear evidence of such instances has been found so far. Protests against the Tipu Sultan statue have continued since June, and with the latest agitations over cow protectionism, the BJP is once again attempting to bring Hindutva politics back into focus in Andhra Pradesh.

Ahead of the Tirupati Lok Sabha bye-election and civic body elections that were held in March and April this year, the state witnessed a series of controversies over an alleged rise in attacks on Hindu temples. BJP ally Jana Sena Party’s chief Pawan Kalyan and TDP chief Chandrababu Naidu also echoed these allegations. Yet, the YSRCP saw a sweeping victory in the municipal polls and the Tirupati bye-poll.

The controversies over cow slaughter

The Yemmiganur MLA’s comments were reportedly made in the wake of a police complaint by a group of individuals in Yemmiganur, Kurnool district, on the occasion of Bakrid, accusing a group of Muslim men of cow slaughter. Commenting on the incident, Yemmiganur YSRCP MLA K Chennakesava Reddy reportedly said that the Prohibition of Cow Slaughter Act was outdated. “Implementing the cow slaughter prohibition law is very difficult. No government has the machinery to fully prohibit cow slaughter,” the MLA said. He also reportedly said that while some communities worship cows, for several communities it is a source of food and nutrition, and spoke against imposing restrictions on someone’s dietary habits.

With BJP leaders taking objection to the MLA’s statement, and BJP workers trying to surround the MLA’s residence on July 25, Chennakesava Reddy soon distanced his comments from his party. “My statement is not related to YSRCP or the Chief Minister’s Office. I said them in my personal capacity as a secular individual. I am from a Hindu family, we worship Hindu deities. But we are secular. We oppose BJP’s extremism, not the Hindu religion,” he told the media. He said that the BJP, which was against minorities, was trying to use cow protectionism and “cow sentiment” as an excuse to gain power in the south Indian states.

In another recent incident, the death of a cow at the Andhra University campus in Visakhapatnam sparked controversy, with BJP and Jana Sena Party workers demanding action against a Muslim security officer. University authorities have since formed a five-member committee to conduct a probe into the incident. According to Visakhapatnam III Town police, it was a regular occurrence for cattle to enter the campus for grazing, and for the security personnel to impose a fine on the owner of the animal. On July 22, when the cow entered the campus, it was already sick, according to the police.

“The cow’s owner brought in a veterinarian who said it was unwell. As the cow was unable to move, the owner said he would return with help. The cow died in the meanwhile, and as the owner did not come back to retrieve the body, the security personnel buried it on campus wasteland,” the III Town Station House Officer told TNM.

Speaking at the dharna event on Wednesday, state BJP president Somu Veerraju objected to the Yemmiganur MLA’s statement that beef consumption must be allowed. Making unscientific claims like “cow urine is being consumed as a medicine for cancer,” Veerraju compared the YSRCP’s rule to the British, and went on to repeat the allegations of forced religious conversions.

Earlier on July 27, Veerraju and several BJP workers were detained by the police, as they staged a sit-in protest against the installation of Tipu Sultan’s statue in Proddatur. BJP leaders in Karnataka have repeatedly opposed commemorations or celebrations over Tipu Sultan, calling him a tyrant who destroyed Hindu temples during his rule. Echoing these ideas, Veerraju called Tipu Sultan a “barbarian with maniacal communalism who massacred thousands of Hindus.” He also claimed that Tipu Sultan “enabled rapes, demolished temples, and resorted to forced conversions.”

Veerraju alleged that Chief Minister YS Jagan Mohan Reddy was making his MLAs and ministers work with an anti-Hindu sentiment. “I am taking my first step to end the anti-Hindu sentiment of the Yuvajana Sramika Rythu Congress Party (YSRCP),” Veerraju said.

Earlier in June, when the foundation for the Tipu Sultan statue was laid, state BJP leaders vehemently opposed the plan. State BJP general secretary S Vishnu Vardhan Reddy had warned that statewide agitations would be held if the decision was not withdrawn. However, the Proddatur municipal council passed a resolution in favour of installing the statue. The foundation stone was laid by Proddatur MLA from YSRCP Rachamallu Sivaprasad Reddy who has been in support of the plan. The MLA, a history graduate, had earlier said that if it could be proved that Tipu Sultan had committed atrocities as alleged by the BJP, he would back away from the installation plan.