Interfaith Marriage linked with ‘Love Jihad’ stopped by Hindutva Group in UP. 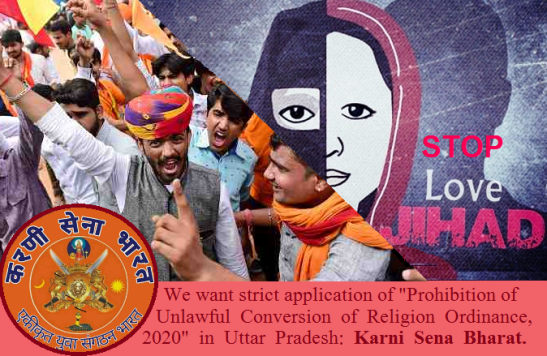 Subham Choudhury | HENB | Ballia | July 31, 2021:: Now, the rackets of Love Jihad, forced conversion of Hindu girls and women for marriage by the  Muslim perpetrators have been challenged severely in Uttar Pradesh.

An interfaith wedding between a Hindu girl and Muslim boy was stopped, allegedly by activists of a Hindutva outfit named Karni Sena, at a local court in Ballia district by labelling it a case of “forced conversion and love jihad”, the police said on Thursday.

The workers of the Hindutva outfit then allegedly forced the woman to go to Kotwali police station, where police officers intervened and handed over the 18-year-old woman to her parents, until she gives a statement in the court. The incident took place on Wednesday creating a tension in the area.

As appeared in Indian Express, Ballia’s Superintendent of Police, Vipin Tada, said, “We have lodged a case on a complaint from her father that his daughter had been kidnapped. We will present her in a court soon, where she will record her statement. Further action will be taken based on her statement, as the woman is an adult.”

The SP said the woman has been “handed over to her family and will soon record her statement in court”.

The Karni Sena people alleged that an illegal conversion was taken place to proselytize the dalit girl into Islam to ease her Nikha (Muslim marriage) with the abductor Muslim guy Dilshad Siddiqui, 24, a resident of Padri village under Ubhaon police station limits.

Gyaneshwar Mishra, SHO, Ubhaon police station, where the case against Siddiqui was lodged, said the woman’s father, Jai Prakash, has alleged in his complaint that his daughter had not returned home for two days and that he had heard some people, including Siddiqui, had coerced her and were getting her married. “He lodged the complaint on Wednesday evening after the ruckus at the court in the afternoon,” SHO Mishra said.

As per source, the Karni Sena is planning to run awareness in the area to stop such ploy of ‘Love Jihad’ to trap Hindu girls and women by Muslim perpetrators to harm their targets in many ways. Karni Sena also demands strict application of ‘Prohibition of Unlawful Conversion of Religion Ordinance, 2020’ in the state to check the uprising Islamic tendency to marry Hindu girls in deceitful love traps.

One comment on “Interfaith Marriage linked with ‘Love Jihad’ stopped by Hindutva Group in UP.”