Hindutva: The only way to get a success in Uttar Pradesh Election.

Uttar Pradesh Elections 2022: Opposition parties are treading a path already being walked by the BJP which has brought the saffron party success time and again.

Abhinav Gupta | FE Online | New Delhi | Oct 18, 2021:: The stage is set for a high-voltage electoral battle in Uttar Pradesh and the major players in the fray – BJP, Samajwadi Party, Bahujan Samaj Party, Congress and AAP are trying an array of strategies to outshine each other. The common thread between them – a brush with soft Hindutva.

Opposition parties are treading a path already being walked by the BJP which has brought the saffron party success time and again.

While Priyanka Gandhi is following the same template set by Rahul Gandhi in the 2017 Gujarat and UP polls, a surprise shift in the poll pitch comes from BSP supremo Mayawati who recently said that projects and schemes started by the BJP government in religious places like Ayodhya, Varanasi and Mathura will continue unhindered if her party comes to power.

Priyanka Gandhi, who is leading the Herculean task of turning fortunes for the Grand Old Party which was last in power in UP between 1985 and 1989, is revisiting the path walked by her brother.

Rahul’s approach of soft Hindutva was on display during the UP and Gujarat assembly polls in 2017 when he dressed up in dhoti and kurta with his forehead smeared with ‘tilak’ as he visited the temple towns of Ayodhya in UP and Dwarka in Gujarat. While the temple run strategy helped him improve the party’s tally, it did not earn him a victory. 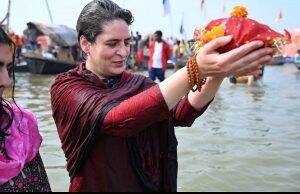 Five years on, Priyanka donned the avatar of a “devout Hindu woman” with tilak and sandalwood paste on her forehead and a Rudraksh bead necklace, as she addressed the Kisan Nyay rally in Varanasi last week. She began her address by reciting a verse from Durga Saptashati as she said she was on fast during the Navratri festival. She even chanted ‘Jai Mata Di’ before beginning her speech.

While political observers and opposition see this as a desperate bid by the Congress hoping for a turnaround, the party says there is nothing unusual in this as it firmly believed in harmony of all religions.

In her quest to become the chief minister for a fifth time, Mayawati is aware that the Dalit-Brahmin social engineering, which earned her a thumping victory in 2007, might not be enough to take on the BJP this time. The indication comes with the mention of Mathura, Varanasi and Ayodhya in her speech. 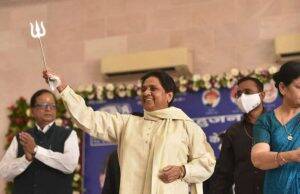 However, BSP’s shift became visible when party’s general secretary Satish Mishra addressed a series of Prabuddh Sammelans, and before each of his speeches, he offered prayers at the temples while praising Hindu gods and goddesses. Notably, he also promised a grand temple of Lord Ram if BSP comes to power.

When asked about this shift, BSP national spokesperson Sudhindra Bhadoria told FinancialExpress.com, “We have always been following the motto of ‘sarva dharma sambhaav’ (equality of all religions), we have been working on the policy of ‘sabka sath sabka vikas’, opposite to the widespread perception about us. Even when we came to power in 2007, we worked in places like Mathura and Ayodhya back then too and the development work done by us can still be seen there.”

With a target of ‘baais mein bicycle’ (bicycle is Samajwadi Party’s symbol), Akhilesh Yadav is also hopping from one temple to another. Other than launching his Vijay Yatra from the banks of Ganga in Kanpur recently, he visited Kamadgiri Temple in Chitrakoot, Vimalnath Temple at Farrukhabad and Buddha Temple at Shravasti to name a few in the past few months.

The SP chief took a holy dip in the Sangam during the Magh Mela. He installed a 51-foot-tall idol of Lord Krishna at Saifai in Etawah, and has also promised to install an idol of Lord Parshuram.

Speaking to FinancialExpress.com, party spokesperson Naved Siddiqui said that “it is a good thing if parties are visiting temples. That’s what we do before starting a good work.”

However, Samajwadi Party national secretary and spokesperson Rajeev Rai said that while his party chief was fighting elections on the basis of issues, other parties were doing it to gain electoral mileage.

“Whenever something happens, Priyanka Gandhi ji comes in a parachute, visits and goes. Whether it is the Congress or the BJP, they are doing all this because they have nothing to show to the people about what they have done in these five years. We are fighting these elections on the basis of issues in the state,” Rai told FinancialExpress.com.

AAP’s trying to strike a chord with masses 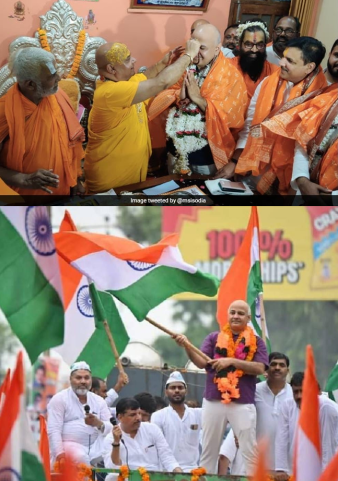 Buoyed by the AAP’s thumping victory in 2020 Delhi polls, Kejriwal now wants to turn the tables in Uttar Pradesh. But to do that, it will have to outrun the BJP in its own game. To make itself acceptable to the masses of Uttar Pradesh, AAP recently took out a Tiranga Yatra in Ayodhya, sounding its poll bugle with a target of contesting all the 403 seats.

Asked if Kejriwal was following the footsteps of the saffron party, the AAP said the objective of the Tiranga Yatra was to distinguish that the party’s interpretation of Hindu identity and religion was very different from what it called the “decisive” version of Hindutva of the BJP.

Speaking to FinancialExpress.com, AAP MLA Madan Lal said that Hindutva is not owned by the BJP and the party’s Tiranga Yatra was a “message to the people that country comes before any political agenda.”

‘Not soft Hindtuva, this is bluff’

The ruling party doesn’t seem to be much concerned about the opposition experimenting with its strategies and flirting with the soft Hindutva. Instead, it says that people can see how these Opposition leaders are changing colours like chameleons after seeing the people’s mandate.

Speaking to FinancialExpress.com, BJP MP from Meerut Rajendra Agrawal said: “This is not soft Hindutva, this is bluff. What they themselves never approved of, they are now doing the same under the pressure of vote bank politics.”

“Now she (Priyanka Gandhi) will chant Jai Shri Ram, Jai Mata Di. This is how Congress has been working… They have always disrespected culture. Had they approached a little wisely, the issue of Ram Mandir would have been resolved then and there.”

Opinions are individual. Heading, sub-headings and pics are changed.

2 comments on “Hindutva: The only way to get a success in Uttar Pradesh Election.”

This entry was posted on October 18, 2021 by hinduexistence in Hindu Advocacy, Hindu Agenda, Hindu Politics, Hindutva Politics and tagged Hindutva Sharanam Gacchami, Opposition banks on ‘Hindutva’, Temple run - holy dips - religious chants, The Hindutva way to get a success in UP Election, To turn tables against BJP in UP.