Harsha murder: VHP members and others protest in Shivamogga. 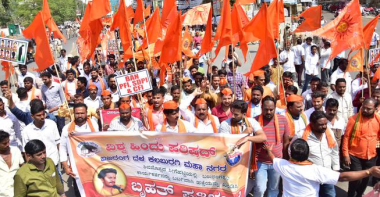 B Upendran | HENB | Hassan | March 8, 2022:: Many members of the Shivamogga district unit of Vishwa Hindu Parishad (VHP) and other pro-Hindutva organisations staged a protest in front of the Deputy Commissioner’s office in Shivamogga on March 7 demanding severe punishment to those involved in the murder of their activist Harsha, a 28-year-old resident of Seegehatti who was murdered ‘jihad’ elements on February 20.

The protesters alleged that the Popular Front of India (PFI) and Social Democratic Party of India (SDPI) were behind the killing of Harsha. They want the accused to be booked under the Unlawful Activities (Prevention) Act (UAPA) and given the death penalty. They also criticized the BJP government in Karnataka for failing to stop the murder of Hindutva activists in the State.

Earlier, VHP Prantha Karyadhyaksha Prof M B Puranik urged the government to take a firm decision on anti-social and Jihadi forces increasing in the state. .