Genocide Museum on Kashmiri Hindu Pandits will be built in Madhya Pradesh. 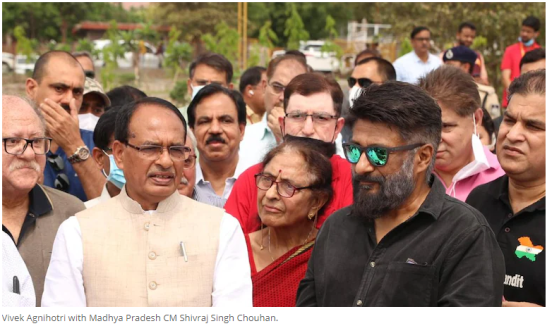 The Kashmir Files director to build Genocide Museum, thanks MP CM for granting land and for assuring every cooperation.

Maya Avasthi | HENB | Bhoopal | March 25, 2022:: Vivek Ranjan Agnihotri’s sensetional film, “The Kashmir Files” has become a matter of serious discussion and is doing good business at the box office, It has also shattered box office records. Today, Vivek Agnihotri met Madhya Pradesh Chief Minister Shivraj Singh Chouhan and requested him for a piece of land to build a Kashmir Genocide Museum. The MP CM instantly agreed to it and granted him land and promised logistical support and every co-operation. Agnihotri also thanked MP CM to make The Kashmir Files tax free the state of Madhya Pradesh.

Vivek Agnihotry to build a Genocide Museum in Madhya Pradesh

Today, on March 25, Vivek Agnihotri shared a video on his Twitter thanking the Chief Minister of Madhya Pradesh for providing land in the state to build a Genocide Museum. He wrote, “BIG ANNOUNCEMENT: Our @i_ambuddha Foundation & @kp_global were working to build a Genocide Museum. Today, when I requested @ChouhanShivraj ji about it, he instantly granted land & logistical support. This will be fully funded by us & the people. It will be a symbol of Humanity (sic).” 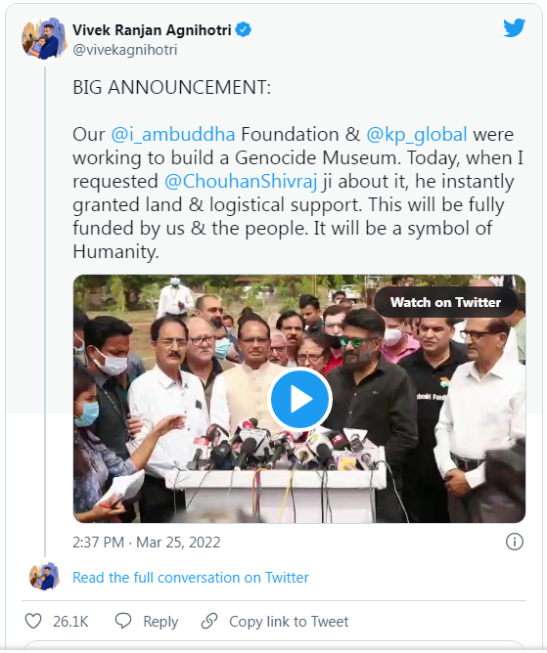 In the video, the filmmaker can be seen thanking CM Shivraj Singh Chouhan for making The Kashmir Files tax-free in Madhya Pradesh. When Vivek requested him to help in making a Genocide Museum, the CM replied, “Vivek ji you can make a plan for the Genocide Museum, the state government will support you with land, and more. I truly respect your emotions. People should know the value of humanity which you just spoke about.”

Sharing pictures from the media interactions, VAgnihotri thanked MP CM Shivraj Singh Chouhan and wrote, “On behalf of all Kashmiri Hindus and all persecuted people, I thanks Hon CM @ChouhanShivraj for his prompt decision and support. We want this Genocide Museum to showcase Indian values of Humanity and Vishwa kalyan. This museum will also showcase how terrorism destroys humanity (sic).” 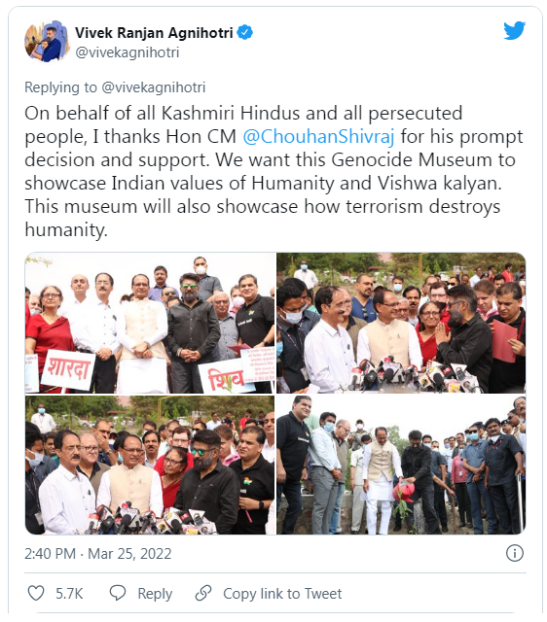 Written and directed by Vivek Ranjan Agnihotri, The Kashmir Files, a film on the genocide of the Kashmiri Pandits, features a stellar cast of actors including Mithun Chakraborty, Anupam Kher, Darshan Kumaar, Pallavi Joshi and Chinmay Mandlekar.

Agnihotri’s The Kashmir Files and the TKF Team as a whole has set a new courage to make nationalist Film in Bollywood and reveal the truth about Indian history under the distortion by the Pro-Jihadi Mafias and Urban Naxals elements.

One comment on “Genocide Museum on Kashmiri Hindu Pandits will be built in Madhya Pradesh.”