The tussle of Political Hindutva between Shiv Sena and BJP-MNS.

Shiv Sena walks the tightrope on Hindutva amid BJP-MNS push. 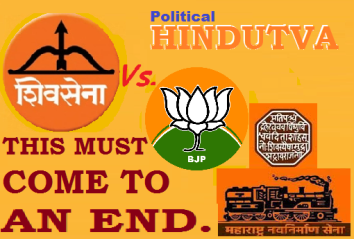 Krishna Kumar |  ET Bureau | Mumbai | April 2022::  Shiv Sena supremo Uddhav Thackeray was not a signatory to a recent letter written by 13 leaders of national opposition parties to the Centre, expressing concern over rise in communal incidents in the country. The move came in the backdrop of pressure from BJP and MNS over Hindutva, according to party circles.

There is nervousness in Sena over possible BJP and MNS creating a perception that the party had diluted its core ideology after sharing power with NCP and Congress. The party mouthpiece had recently criticised BJP for ‘trying to foment communal trouble’. “BJP is trying to foment communal riots in Maharashtra and the country,” spokesman Sanjay Raut had said.

Signing the letter, however, would allow BJP to accuse Sena of diluting Hindutva, party leaders felt. Several Sena leaders are of the opinion that allowing BJP and MNS to be ‘only custodians of Hindutva’ would take away Sena’s vote base. Sena leaders have in the past taken similar positions to protect its base. For example, after a march by Muslims led to a riot in Amravati last November, the BJP organised a bandh, which caused another riot, but Sena office bearers participated in the BJP bandh.

The MVA government nuancing its stand, by introducing permission for use of loudspeakers for religious purposes, has to be seen in this backdrop. It is a departure from its stand that it won’t act against loudspeakers in mosques. “The DGP and the Mumbai Police Commissioner would be soon drafting a policy on loudspeakers on religious places and a notification or guidelines would be issued in the next two days, home minister Dilip Walse Patil said on Monday.

One comment on “The tussle of Political Hindutva between Shiv Sena and BJP-MNS.”

This entry was posted on April 19, 2022 by hinduexistence in Hindu Advocacy, Hindu Agenda, Hindu Politics, Hindutva Politics and tagged Shiv Sena walks the tightrope on Hindutva, Tussle between Shiv Sena and BJP-MNS, Tussle of Political Hindutva.