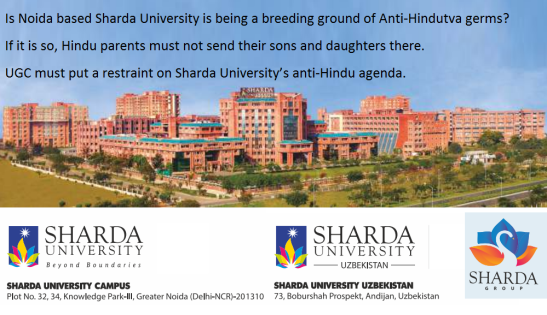 Upendra Bharti | HENB | New Delhi | May 6, 2022:: Noida based Sharda University’s BA Political science question paper asked students to write similarities between ‘Fascisms/Nazism’ and the ‘Hindutva or Hindu right-wing’. In the political science question, the university asked students, “Do you find any similarities between Fascisms/Nazism and Hindu right wing (Hindutva)? Elaborate with arguments. The screenshot of the question paper was shared on twitter+ by a BJP leader Vikash Preetam Sinha.

Though no reaction from the culpable university is still available,  how dare such question involving vilifying Hindutva and Hindus may come to fore through a Delhi academia under the nose of University Grants Commission (UGC). 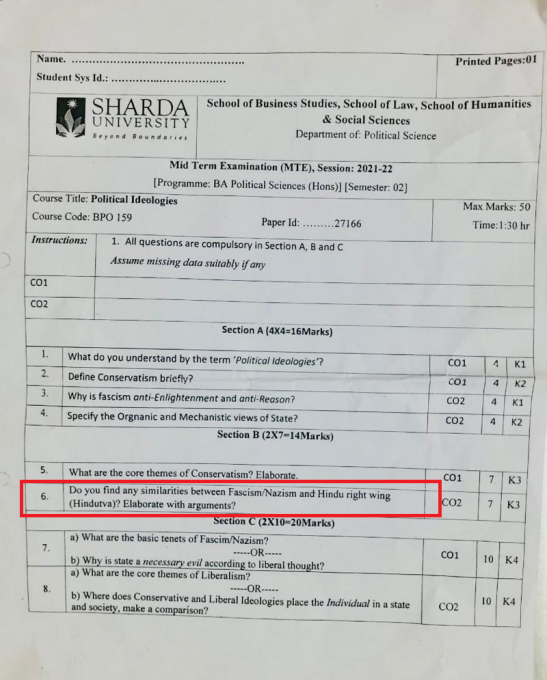 The validity of the question paper could not be verified, but such question paper setting must have been made by the  anti-Hindutva faculty of the university with a design to brainwash the students studying there.

We never seen such questions as, “Discuss the impact of Jihad in contravention to world peace” or “Islamic radicalism in Indian politics and degrading democratic values” or “Communal threads of Madrasa Education system in India” etc. in any political, social studies or education question papers anyway.

UGC must probe into the present perpetration in Sharda University question row and give them a stricture immediately.