10th Hindu Adhiveshan started in Goa with an aim ‘India to become Hindu Rashtra by 2025’. 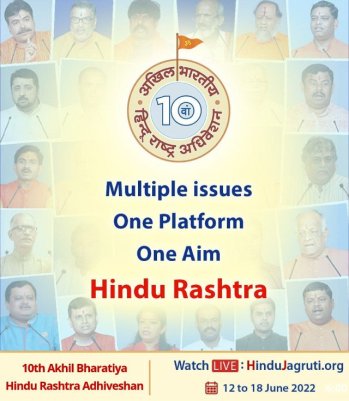 UNI | Panaji (Goa) |  June 12:: Considering the violence perpetrated by religious fanatics across the country after Friday prayers, we will have to fight for the Hindu Rashtra till the entire system of governance remains in the interest of Hindus,” said National Guide of Hindu Janajagruti Samiti (HJS) adiguru (Dr) Charudatta Pingale on Sunday.

Speaking at the inaugural function of ‘Tenth Akhil Bharatiya Hindu Rashtra Adhiveshan’ at ‘Shri Ramnath Devasthan’ at Ponda in South Goa, he said Nandi (Shivling) in Varanasi still looks like the ruins of the original destroyed temple facing the enlightened Gyanvapi mosque.

”In Karnataka, the campaign ‘Pahale Hijab, Baad Mein Kitab’ (First the Hijab, later the textbook) was started by the fundamentalists for the girl students. Despite the High Court ruling against it, not a single ‘secularist’ in the country has dared to ask the Muslims who are demanding hijab, ‘Is the Quran superior or the constitution of the country ?’ How is it inappropriate for Hindus to demand the ‘Hindu Rashtra’ ? It is our natural and constitutional right,” he asked.

”There is vested political interest behind the anti-Hindu alliance currently operating in India. This ‘agenda’ is the biggest challenge facing Hindu Rashtra. To defeat this anti-Hindu ‘Alliance’, we will have to constantly refute it on an ideological and intellectual level in the years to come,” he said.

He asserted that the Hindu Rashtra will definitely materialise in 2025 and called upon Hindus to become active from now on itself’.

The Adhiveshan which began today is being attended by more than 225 delegates from abroad as well as from various states in India.

According to Dr Pingale, the Adhiveshan this year is going to be organisation of Hindu Rashtra Sansad (Hindu Rashtra Assembly) and it will guide the attendees on ways to ensure ideal functioning of the government.

During the course of the Adhiveshan, Hindu Rashtra Sansad will be held for three days. The Sansad will hold detailed discussion by experts on subjects such as ‘Parliamentary and Constitutional ways for establishing the Hindu Rashtra’, ‘Model administration of the temples’ and ‘How to adopt Hindu Educational Policies ?’,” Dr Pingale said.

The Adhiveshan is being attended by over 1000 representatives of over 350 Hindu organisations from USA, UK, Hong Kong, Singapore, Fiji, Nepal as well from 26 States of India. During the Adhiveshan, issues like ‘Jnanvapi mosque at Kashi (Varanasi)’, ‘Mathura Liberation Movement’, ‘Places of worship Act’, ‘Slaying of Kashmiri Hindus’, ‘Sound pollution caused by the loud speakers on mosques’, ‘Hijab agitation’, ‘Halal certificate – An economic jihad’, ‘Protection of Hindus’, ‘Protection of Temple-Culture-History’, ‘Conversions’, ‘Muslim encroachment on mountains and forts’ are to be discussed.

The list of participants in the Adhiveshan mainly include former CBI Director Nageshwar Rao, Adv Harishankar Jain, who is fighting the legal battle against the Jnanvapi mosque at Kashi, his son Vishnu Shankar Jain, who is the National spokesperson for Hindu Front for Justice, BJP MLA from Telangana T Raja Singh, Rahul Kaul of Panun Kashmir, Kuru Thai of Arunachal Pradesh, among others.

Swami Sayunktananda Maharaj of Bharat Sevashram Sangh and Swami Nirgunanandagiri Maharaj of International Vedanta Society will also be present in the the Adhiveshan for 7 days.

3 comments on “10th Hindu Adhiveshan started in Goa with an aim ‘India to become Hindu Rashtra by 2025’.”