Rishi Sunak takes time out of campaign for temple visit on Janmashtami in UK. 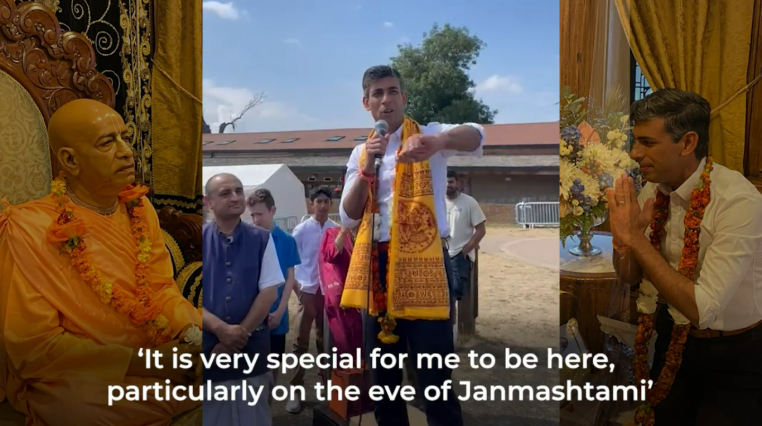 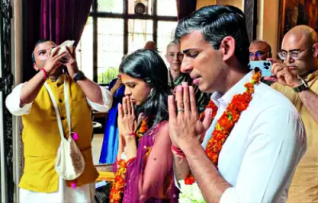 Bhavini Tandon | HENB  | London | Aug 19, 2022:: Britain’s prime ministerial candidate, Rishi Sunak, took some time out of a hectic campaign schedule to make a visit to a Hare Krishna temple on the outskirts of London to celebrate Janmashtami.

Sunak, 42, who swore his oath of allegiance on being elected member of Parliament in the House of Commons on the ‘Bhagavad Gita’, has often spoken about his Hindu faith giving him strength.

On Thursday, he was accompanied by wife Akshata Murty, daughter of Infosys co-founder Narayana Murthy and author-philanthropist Sudha Murty, for darshan at Bhaktivedanta Manor in Watford, Hertfordshire.

“Today I visited the Bhaktivedanta Manor temple with my wife Akshata to celebrate Janmashtami, in advance of the popular Hindu festival celebrating Lord Krishna’s birthday,” Sunak tweeted with an image of the couple offering prayers. 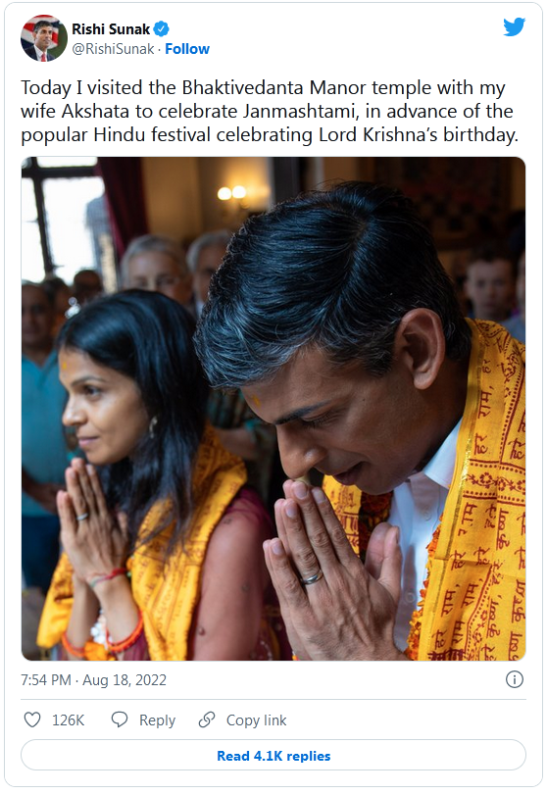 Sunak also told volunteers and visitors at Bhaktivedanta Manor that he drew strength from the Bhagavad Gita during his quest to be the next leader of the Conservative party. He said it had been “a tough campaign” and he had been “giving it everything he had got”. “But at times of the most difficulty, what Akshata has done for me, is to give me the teachings of the Gita and she has done it on the phone and by message. It is the Gita that has given me strength over the past few weeks,” he said.

Rishi Sunak and his wife Akshata Murthy were both praised for their spirituality and humanity  during their visit to Iskcon’s  Bhaktivedanta Manor Hare Krishna Temple on the eve of Janmashtami on Thursday.

Bhaktivedanta Manor is one of the UK’s leading International Society of Krishna Consciousness (ISKCON) hubs, which was famously donated by Beatles musician George Harrison. The manor is dubbed a “spiritual sanctuary” spread over 78 acres of land with sprawling gardens, an organic farm, a protected herd of cows as well as a temple. Rishi praised the role of ISKCON to spread humanity and spirituality and went to the Gaushala (cow shelter) there during his Janmashtami visit. 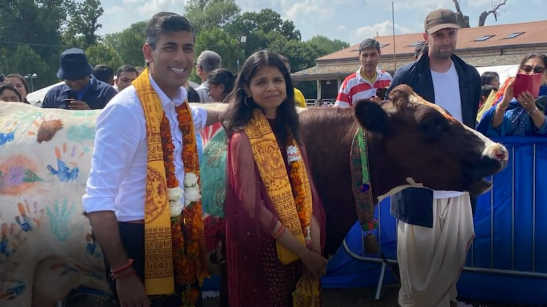 “Delighted to welcome today Rishi Sunak to Bhaktivedanta Manor temple in Hertsmere to celebrate Janmashtami, the Hindu Festival celebrating the birth of Lord Krishna. Wishing everyone in Hertsmere a very Happy Janmashtami,” said Oliver Dowden, Conservative Party MP for Hertsmere who is backing Sunak in the Tory leadership race.

Sunak, the UK-born son of NHS doctor Yashveer and pharmacist Usha Sunak, is a devout Hindu who counts lighting Diwali diyaas outside No. 11 Downing Street as Britain’s first Indian-origin Chancellor among one of his “proudest moments” in life.

The former finance minister is on a busy campaign trail across the UK in an effort to win over the votes of Tory members, who are in the process of casting their postal and online ballots in the election.

Sunak’s rival, Foreign Secretary Liz Truss, is currently holding a firm lead in most recent surveys of the party membership. However, he has insisted that he “definitely” still has a shot at victory and is excited to keep going as he thinks his “ideas are the right ones” for the country.

The election is set to close on the evening of September 2, with the new Tory leader and British Prime Minister to succeed Boris Johnson confirmed on September 5.

__Inputs from PTI and TOI.