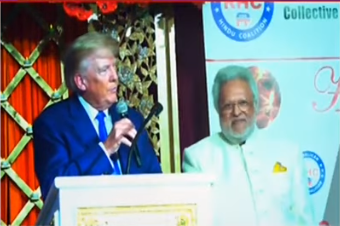 Tripti Desai | HENB  | New Delhi | Oct 28, 2022:: Former United States President Donald Trump acknowledged Hinduphobia and promised to build a Hindu holocaust memorial in Washington DC. While speaking at a Diwali event, Trump also said that it was because of Hindus that his party won the 2016 presidential elections.

“I totally endorsed the idea of building a Hindu holocaust memorial in DC,” Donald Trump said amid loud cheers from the crowd. He was speaking at a Diwali event organised by Republican Hindu Coalition (RHC) at his Mar-a-Lago resort in Florida. The event was attended by about 200 Indian-Americans.

While the Hinduphobia is related to anti-Hindu (mainly by the pro-Islamist and pro-Communist elements) propaganda raising in US and many parts in Europe; the Hindu holocaust is related to the genocide and ethnic cleansing of Kashmiri Hindu pandits perpetrated by Jihadi elements in mid-year 1990 and afterwards and still going on in a suppressed way.

India’s Opposition connected to Kashmir separatists smells ‘RSS agenda’ in Trump’s declaration. They are not happy to hear the declaration made by Donald Trump with an aspiration to win over 2024 election in US.

But, many organisations related to the rehabilitation and welfare Kashmiri Pandits welcomed the statement of Trump as raised the issues of Hindu-phobia and Hindu-holocaust.