Aum and Hinduism give peace to Julia Roberts

Julia practises Hinduism, hopes she will have a quieter innings next time

Aug. 6: Julia Roberts has raised the bar for the art of asking for a “second chance”: she has started practising Hinduism so that she can be reincarnated as “something quiet” without the stress of celebrity.

The superstar with the million-watt smile has disclosed that she is a practising Hindu who goes to the temple to “chant and pray and celebrate”. “I’m definitely a practising Hindu. I’ve been so spoiled with my friends and family in this life. Next time, I want to be just something quiet and supporting,” Julia told Elle magazine.

Julia, who was born to Baptist and Catholic parents, is thought to have been introduced to the religion while shooting her new film, Eat, Pray, Love, in which she plays a woman hoping to find herself through spirituality. The recently divorced character visits Italy for food, India for spirituality and Bali, where she finds love.

The 42-year-old Julia, who married cameraman Daniel Moder in 2002, said the couple worship at a temple together regularly with their three children.

Will her wish for the next life be granted? “You can say the belief in reincarnation gives one hope of a second chance,” said Radharaman Das, the general manager of Iskcon, Calcutta. 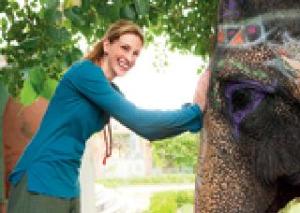 Das said there was hope for her in this life itself and she was going about it the right way. “In case of rasogolla, you have to eat it to know what it is. Thinking of it will not do. But God and God’s name is the same. Chanting his name makes you experience God and expiate your sins of millions of earlier births.”   Photo >>>: Julia Roberts with an elephant in Eat, Pray, Love

What would Julia need to do to be considered a practising Hindu? According to Das, all initiates take a vow to follow four regulations. “The main focus is on chanting 16 rounds of Hare Krishna, each round comprising 108 times. Other than that, meat, as also onion and garlic, is to be avoided, as is intoxication, including tea or coffee. Gambling is out of bounds, so is illicit sex, i.e. sex outside marriage.”

But many feel Hinduism does not require such mandates. “Hinduism is more a way of life,” said Mural Bhai, the general secretary of Dakshineshwar Ramkrishna Sangha Adyapeath. “Manu says do not envy, speak the truth, do not steal, help others and lead a restrained life,” he added.

“The religion is so broad in outlook that it does not issue threats of sending one to hell if one fails to follow prescriptions. There are lapses, not sins,” said Swami Gurupadananda of Bharat Sevashram Sangha.

Some reports claimed Julia had converted – an unsettled issue in Hinduism as many purists believe one has to be born a Hindu, although some organisations do carry out conversions.

Julia does not need to give up her name, though some reports claimed that her children had been renamed (Laxmi for Hazel, Ganesh for Phinnaeus and Krishna Balram for Henry). “Taking a new name is not mandatory, though it gives you a Hindu identity,” said Swami Gurupadananda of Bharat Sevashram Sangha.

When Julia came to India, she did carry the ultimate symbols of materialism — 350 guards, bullet-proof cars and a helicopter. A minor controversy also broke out when villagers near Delhi were not allowed to enter a temple on Navratri.

However, in the magazine interview, she spoke with the sagacity expected of someone who has discovered India. Slamming the use of cosmetic surgery, Julia said: “It’s unfortunate that we live in such a panicked, dysmorphic society where women don’t even give themselves a chance to see what they’ll look like as older persons. I want to have some idea of what I’ll look like before I start cleaning the slates,” she said.

Not that she has forgotten more expressive — and less spiritual — terms. “I want my kids to know when I’m pissed, when I’m happy, and when I’m confounded. Your face tells a story… and it shouldn’t be a story about your drive to the doctor’s office.”

The screen adaptation of the best-selling memoir by Elizabeth Gilbert is expected to be released in Britain later this year. Trupti Patel, of the Hindu Forum of Britain, told PTI: “If Julia Roberts wants to call herself a Hindu, we welcome her into our Dharma…. The HFB does hope that it is not a cheap publicity stunt to promote her film.”

WITH INPUTS FROM SUDESHNA BANERJEE

One comment on “Aum and Hinduism give peace to Julia Roberts”