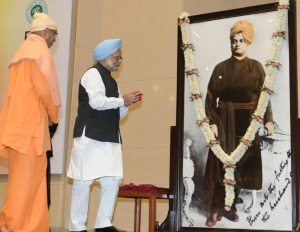 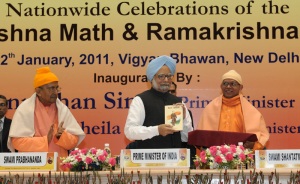 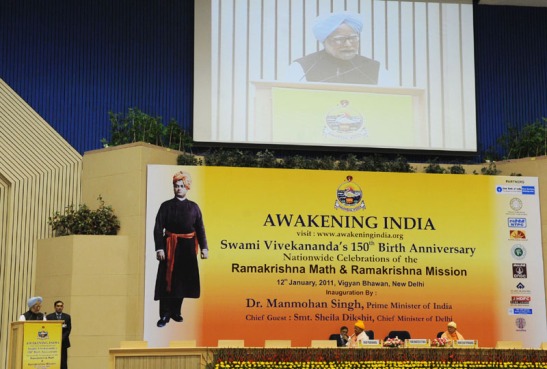 “I am honoured to be present here today on this very happy occasion of the inauguration of the four year long celebration of 150th Birth Anniversary of Swami Vivekananda. “

Recalling the exemplary life and message of Swami Vivekananda, the Prime Minister exhorted people to rekindle the eternal message of this great patriot and son of India and help build a self-confident India where each citizen has the right to his or her own self-respect, dignity and well being.

“It was on a September day in 1893 that a young man from India, dressed in the traditional saffron robes of a Hindu monk, addressed the Parliament of Religions in Chicago. It was the first time he had gone abroad and it was the first time he was speaking in public. Yet his first few words beginning with his greetings to the ‘sisters and brothers of America’ electrified the audience and brought forth an applause that lasted for over two minutes”, the PM said.

“Swami Vivekananda’s Chicago address is a proud moment in India’s history and it heralded the arrival of one of India’s greatest spiritual leaders on the world stage”, Dr. Singh added.

Reflecting on Swamiji’s mission, the Prime Minister said, “Swami Vivekanandaji dedicated his life to the service of his motherland and to the spiritual awakening of Indian people. He worked to instill pride in his countrymen in their cultural heritage. He tried to build a national consciousness that was modern, rational and universal”.

Elaborating on Swamiji’s stress on Indian self-respect, the Prime Minister said “He believed that the absence of self-respect was at the root of India’s weakness. He exhorted the people to inculcate self-respect. He wanted every Indian to be proud of being an Indian and being capable of saying that every Indian is my brother or sister. His message broke through the shackles of caste and creed and spoke of a language of universal brotherhood”

The Prime Minister informed the audience that the Government of India has set up a National Committee, under the chairmanship of the Prime Minister, to guide the conduct of the commemorations of the 150th Birth Anniversary of Swami Vivekananda in a befitting manner.

“Swami Vivekananda had very definite and enlightened views on education. He conceived of education as the primary means of rebuilding Indian society,” Dr. Singh said.

“We are working on a suitable commemorative event in Chicago,” he said.

The Government of India has already approved a film on Swami Vivekananda by the Public Service Broadcasting Trust, he said.

It has also set up a National Committee under the chairmanship of the Prime Minister to guide the conduct of the commemorative events.

Rs 100 crores to mark the celebration in Social work

The Centre will provide Rs 100 crore to Ramakrishna Mission, Belur Math to implement various schemes to celebrate the 150th birth anniversary of Swami Vivekananda. The Prime Minister, Dr Manmohan Singh, announced this at a meeting in Vigyan Bhavan today.

Dr Singh said a commemorative event to mark the 150th birth anniversary of Swami Vivekananda is being planned to be held in Chicago where the 19th century philosopher had earned accolades for his discourse on Hinduism at the Congress of world religions in 1893.
The Centre has set up a 10-member implementation committee with Swami Prabhananda, general secretary, Ramakrishna Math and Mission, and Swami Suvirananda, assistant general secretary, Ramakrishna Math and Mission, as members.

Dr Singh said Swamiji had worked for the common masses and had believed that real development of India was not possible unless common people are educated. His messages still inspire the youth. It may be recalled that 12 January, which is Swamiji’s birthday, had been declared as Youth Day by the then Prime Minister Rajiv Gandhi 26 years ago. The RKM has chalked out elaborate schemes which include development of mother and child, setting up of coaching centres to educate school drop-outs and health awareness programmes.

With this Rs 100-crore grant from the Centre and funds raised from public and corporate sectors, the institution will involve its 171 centres all over the world, including 128 in India, to start model centres of development with the hope they will inspire the next generation to take up similar projects.

RKM is focussing on four key concerns integration of children in 150 areas, 150 health projects, empowerment of women, adoption of 10 villages, and projects for the uplift of the poorest of the poor in five city slums and five villages.

The institution will celebrate Swamiji’s 150th birthday at his ancestral home on January 12, 2013. But work on social development, started in October, which will culminate at the closing ceremonies at Belur Math and Netaji Indoor stadium in 2014.

There will be sadhu sammelans in Haridwar and South India, an all-India convention on the Vedantic idea of brotherhood’, folk and tribal programs and launch of Vivekananda’s life story in animation DVDs. RKM general secretary Swami Prabhananda said Union I&B minister Ambika Soni is keen on spreading Vivekananda’s message through TV programmes.

According to sources, Swami Vivekananda during his travel across the country as Parivrajak, visited Kanyakumari in the last week of December in 1892, to offer prayers to Devi Kanyakumari (Bhagavathi Amman). On December 25, he swam to a rock in the sea nearly 1,600 feet from the southern most tip of the land and spent the whole night in deep meditation. He chose the rock at the confluence of three seas as the site for his meditation.

“At Cape Comorin, sitting in Mother Kumari’s temple, sitting on the last bit of Indian rock, I hit up on a plan,” wrote Swami Vivekananda. It was said that sitting on the rock he looked northward at the great land and its teeming millions and resolved to dedicate himself to the service of his country and to convey the message of Vedanta to the West. 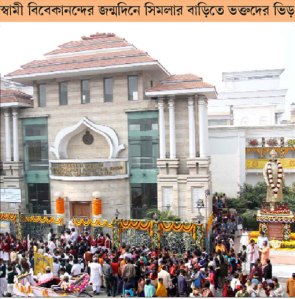 At a function at the Swamiji’s ancestral home in north Kolkata, the Ramakrishna Mission began a three-day celebration with chanting of vedic hymns before Swamiji’s statue under the supervision of RM president Swami Suhitananda.

Youths from different walks of life have been invited to take part in multifarious cultural functions for next two days.

The day was also being osberved as ”National Youth Day”, which the Union government declared in 1984 to honour the Swamiji.

Rallies were also taken out at various parts of the city to mark the occasion.

In the city of Swamiji ‘Kolkata’ Swami Atmasthananda, president, Ramakrishna Math and Mission, unveiled a statue of Swami Vivekananda in Baranagore.

Dr. Kiran Bedi in an interactive session with students in Narendrapur RKM

In another function, former IPS officer Kiran Bedi took part in an interactive session with students of Ramakrishna Mission Ashrama, Narendrapur, to mark the inauguration of the golden jubilee celebrations of the college on the premises. “The celebrations have been deliberately inaugurated on Swami Vivekananda’s birthday,” said the principal of the college, Swami Suparnananda.

Reports of celebration on this National Youth Day in India in all corners are highlighting the central theme of Social Service for the Living God in Men. Important events marked the significance in opening of mobile dispensary (Jalgaon), spreading smile rally – cleft lip and palate programme (Lucknow), energy awareness campaign (Kolkata), inter-active session amongst students (Narendrapur), inter-faith forum (Hissar) and many more genuine self-less services not in the way of Christian services for ‘convert into Christianity’ mode, Swami Vivekananda discarded the thing most. 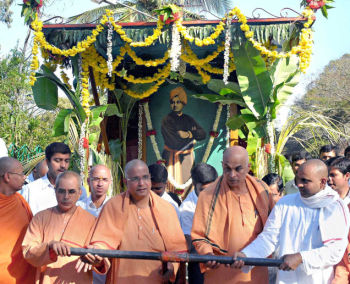 Mysore Sobhayatra in which sannyasis, brahmacharis and devotees participated together.

Some important celebrations and reports of Vivekananda Janma Jayanti here in below.