Way out for the major declining of Hindu population in India 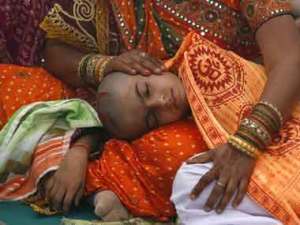 Hindus have among the lowest overall sex ratios and child sex ratios in the country as per Census 2001. Amit Dave/Reuters

Census 2011 is likely to throw up a psychologically important figure on India’s religious demographics. For the first time in over a century, the proportion of the Hindu population in the country will probably fall below the 80 percent mark — in keeping with the long-term trend of a significant divergence between Hindu and Muslim growth rates.

Demographers like Ashish Bose and SC Gulati have varying viewpoints on the subject. While Bose believes that “it is quite likely that the proportion will be below 80% in 2011”, Gulati says that “A secular trend cannot be predicted for religions based on past data”. The latter view is also backed by another Economic & Political Weekly (EPW) research paper “Hindu-Muslim Fertility Differentials”, which says: “It is true that a Hindu-Muslim differential in fertility persists in India’s demographic reality, but it is no more than one child. It is also not too large to swamp India’s Hindu majority in the foreseeable future. Nor is the gap likely to persist for a very long time as we find that the fertility level among Muslims declines with increasing level of education and standards of living. The faster increase in family planning among Muslims supports this conjecture”.

In a country where Hinduism is the majority religion, it is a unique trend that the proportion of Hindus has shown a secular decline since 1961, matched by a corresponding increase in the proportion of Muslims. While religion is a contentious issue to analyse at any point in time, it is equally imperative to analyse trends deeply enough to understand its socio-economic ramifications.

Firstpost is raising this issue not to pander to any scare-mongering among Hindus, but because it needs to be understood in the right context. As we await the Census 2011 results on religious demographics, we undertook an analysis of this trend and what it means for the future. Our detailed analysis indicates that while the population of Muslims is indeed growing faster than Hindus, this is only partly due to higher birth rates among them; Hindus, on the other had, also carry a responsibility for the trend in the form of lower longevity, as well as widespread prevalence of gender discrimination and higher mortality among children.

Explaining the trend
The proportion of Hindus has in the population shrunk from 83.4 percent in 1961 to 80.5 percent according to the 2001 census. This trend matches with an almost equivalent proportional rise among the Muslims — from 10.7 percent to 13.4 percent from 1961 to 2001 (and for this reason we also restrict our study to a comparative analysis between these two religions). A declining proportion of Hindus means either that the growth of Hindus is declining or that of other communities is rising. Or, as in this case, a combination of both. Decadal growth in the Hindu population has fallen to 19.3% compared with 23.8% in 1961, as per our estimates based on data from the National Minorities Commission and the Census of India 2001. In comparison, the growth in the Muslim population accelerated from 30.6% in 1961 to 34.6% in 2001. (Figures for religious demography in 2011 are yet to be made available).

For a country that has been battling the population problem for decades, while a decline in the proportion of Hindus has been flagged as a source of concern by religious organisations, to others it actually indicates social progression. It is seen as socially progressive since population growth depends on factors like fertility rates and birth rates.  These, in turn, are influenced by social factors like literacy, in general, and female literacy, in particular, awareness about contraception methods, average age of marriage and the proportion of working women. Lower fertility and birth rates then are pointers to the development of societies as such.

The social factors
On some metrics, Hindus do perform better. According to estimates published in an EPW research paper on “District level fertility estimates for Hindus and Muslims”  in 2005, Crude Birth Rates (CBR, as defined by number of births per 1,000 persons) for Muslims are a much higher at 30.8 as compared with the Hindu number of 24.9 and the all-India average of 25.9. This is also mirrored in a higher Muslim Total Fertility Rate (TFR, as defined by the number of children that would be born to a woman if she were to live to the end of her child-bearing years) of 4.1 as compared with 3.1 for Hindus and 3.2 for all India.

It is hard to overlook the fact that trends in birth rates and fertility rates are seen as commensurate with the expected trends for literacy, use of contraception and workforce participation, despite the differences in methodology of estimation and sources.

Hindu women have slightly higher literacy rates than Muslim women at 53.2 percent and 50.1 percent, respectively as per Census 2001, which has been considered as compared with Census 2011 to keep time periods comparable. Moreover, the last National Family Health Survey (NFHS) in 2005-06 found that while 57.8 percent of Hindus were using contraception, the figure was  much lower at 45.7 percent among the Muslims — suggesting, at least in part, a greater awareness about use of family planning among the Hindus.  We also observe a higher proportion for working women among the Hindus — at 27.5 percent, this is higher than even the all-India average of 25.6 percent, with the Jains, Muslims and Sikhs accounting for a lower than average proportion.
However, this is only half the story told.

The other side
True, the Hindu population growth has declined because of some social progression. However, Hindus also show dismal performance when it comes to other crucial social attributes, namely, focus on healthcare and gender bias.  According to a study by the International Institute for Population Sciences, “Inequality in Human Development by Social and Economic Groups in India”, the life expectancy at birth for Hindus in 2005-06 was 65 years while it was higher at 68 years among Muslims. There is, of course, an element of economic prosperity here as well, with the gap between life expectancy for “poor” Hindus and Muslims being wider than that for the “non-poor” in the two communities.  The overall point, however, remains, that at birth a Muslim has a chance of living longer than a Hindu.

This is clearly related to the fact that in childhood itself a higher proportion of Hindus die. Hindus have an infant mortality rate of 58.5, while the same rate among the Muslims is at 52.4, according to the National Family Health Survey (2005-06), where the infant mortality rate is defined as the probability of dying before the first birthday. Similarly, under-5 mortality is at a high of 76 compared with 70 for Muslims. This fact is also echoed in a research paper by the University of Bristol on “Religion and Childhood Death in India”, which says “Muslim children in India face substantially lower mortality risks than Hindu children. This is surprising because one would have expected just the opposite: Muslims have, on average, lower socio-economic status, higher fertility, shorter birth-spacing, and are a minority group in India that may be expected to live in areas that have relatively poor public provision.”

While it remains to be conclusively proved whether Muslims as such provide better healthcare, it has been pointed out that gender bias is one explanation for this trend. According to a 2004 research paper on “Religion and Fertility in India: The role of son preference and daughter aversion” by researchers at University of Ulster and University of Cambridge, “Muslim fertility in India may be higher than Hindu fertility, but we argue that an important, albeit neglected, issue is not that Muslims have more children than Hindus, but that they treat them better on account of significantly lower levels of daughter aversion.”

As per their estimates, male infant mortality rates (where infant mortality rate is defined as the number of infant deaths as a proportion of live births) among Hindus and Muslims are at 4.5 percent and 4.7 percent, respectively, but the difference in female infant mortality rates is much higher, with the rate among Hindus at 6.3 percent and that among Muslims at 4.6 percent, respectively. The numbers are further corroborated by the fact that Hindus have among the lowest overall sex ratios and child sex ratios in the country as per the Census 2001. The overall sex ratio is higher only than the Sikhs at 931, compared with the Muslims’ sex ratio at 936. The child-sex ratio for Hindus is even worse than Muslims at 925 as compared with 950 for Muslims.  In Census 2011, the overall sex ratio has risen from 933 to 940, but the child-sex ratio has fallen from 927 to 914. The religion-wise breakup will be available only later.

Looking Ahead
So what do these trends mean for the future? That’s tough to say. While for now it might be difficult to know for sure how religious demographics will develop over the coming decades, what is clear is that it looks to be less about one religion’s growth versus the other, and more a reflection of serious demographic issues to be addressed by both.

This entry was posted on May 20, 2011 by hinduexistence in Conspiracy against Hindus, Hindu Population, Hindu Tradition and Culture under attack, Hindu way of Life, Hindus against Jihad, Practical Hindutva, Save Hinduism, Save Humanity, World Hindus and tagged Demographical change in India, Economic & Political Weekly, Hindu population set to fall in 2011 Census, Increasing Hindu population in India, Indian Census.