Muslim guy chopped off his Hindu friend ghastly as the later did not lend money to him. 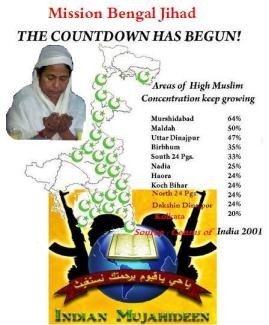 Within the time frame of last posting in Hindu Existence up-till , the Bengal Jihadists have completed some of their assigned duties so successfully without any objection from police, administration or the so called secular media.

Irrefutable insurgency like iota in Islam and the multitude menace of Bengali Muslims in the last 72 hours made fatal to the Hindu victims in various parts of South Bengal in West Bengal, the perfected ‘Jihad Land’ by the blessings of Mamta Banerjee, the ‘converted Muslim’ (?) Chief minister of West Bengal. The aggrieved and persecuted Hindus in Bengal now a days call Mamta Banerjee as Mamtaz Banu Arjee. Her Trinmool Congress Party, TMC is now dis-abbreviated as Total Muslim Congress. And the opposition Communist Party, CPIM is nothing but vacant on-lookers as these Muslim hooligans invading Bengal in the “CHANGE”  scenario, once were their own comrades.

In this span of last few hours and days, we have received dreadful news that :

3. Muslim areas are made as arsenal. Huge arms and ammunition recovered.(Gun, revolvers, bullets, bombs have been recovered from Nalkar & Moukhali  Village of Jibantala Police Station in Canning sub-division).

5. Muslim perpetrators planned to loot every Hindu Temple Treasure if possible. ( In Katiahati under Baduria Police Station, North 24 Parganas, Gold ornaments with a valuation over lac of rupees, were stolen from the Deity from an ancient Kali Temple. In the last three months, 100 of Hindu Temples were robbed off in the dead of nights. Police did worthless without almost any recovery of golden and Silver ornament, image of valuable black stone etc.).

Many thing more must not reach us, but 99% News of Muslim Menace and Mission Bengal Jihad are always uncovered by the purchased media of Bengal. Yes, purchased by the Muslim Operators in Bengal everywhere in every sector of Politics, Education, Business, Press & Media and Everywhere.

One can be traumatized to understand the ghastly Jihad Menace in Bengal rapidly coming to the surface without any hindrance. Read something. 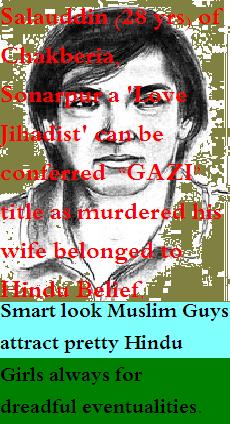 Ankita Mandal, Hindu woman of 19 years, had a love affair with Salauddin Gazi, Muslim guy of 28 years, 4 years ago that resulted to marriage daring all religious differences but little did she know then that her life would come to an abrupt end and the assassin would be none other than her better half. This tragic incident took place at 7 pm, Monday, at Milanpalli, P.S. Sonarpur, suburban area of Kolkata, District: 24 Paraganas (South) and Salauddin, in accordance with police, is at large.

As stated by Ankita’s parents, there was no dearth of mental and physical tortures on Ankita by Salauddin and his other family members. Ankita, what is more, owing to excessive torturing used to come to her parents’ house at regular intervals but thanks to her parents’ efforts, she would return too.

Since torments of alcohol-dependent Salauddin crossed all limits at this time too, Ankita, as usual, left her husband’s residence in Chakberia, Sonarpur and came to her parents’ abode. Salauddin, to take her back to home, came to his in-law’s house on Monday, November 28, 2010,  but Ankita was adamant to not to return anymore. Getting infuriated, Salauddin started black guarding in front of the house and finding no other option to stop this revilement, Mrs. Rekha Mandal, mother of Ankita, leaving behind her two daughters in the house, went to the police station. Father of Ankita, Mr. Dipak Mandal, was not in the house just then, unfortunately.

When Rekha Devi returned with police, she found that Ankita, already murdered, was lying in a pool of blood. Aditi, her younger daughter informed, the moment she went for the police station, Salauddin and Ankita entered into a bitter squabble and Ankita was thrashed inhumanly once more. Salauddin had a sharp knife within his apparel and with it he chopped up Ankita and fled. 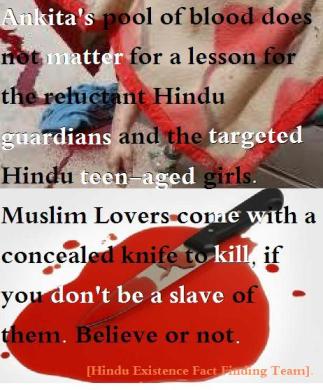 Police has found a chopper, believed to be Salauddin’s murder weapon, from the area. On the word of Kankarprasad Barui, Additional Police Super – District: 24 Paraganas (South), hunting is going on to find Salauddin out. Two brothers of Salauddin, alleged to be accomplices, have been picked up.

Ankita Mandal, without doubt, has become latest epitome of victims of Love Jihad.

Thus ends an inter-religious marriage with the death of a Hindu girl. Love Jihad becomes the greatest victor. 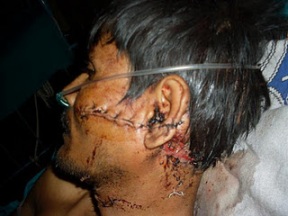 Friendship between a Kaffir and Momin is absurd. SAMAR WAS ATTACKED BY NOOR ISLAM WITH A SHARP SWORD TO SLIT A KAFFIR'S NECK. (Ref : Q : 47.4).

In the district of Hoogly, Samar Adak, a sholapith (Indian Cork)  craftsman by profession, became victim to a wild attack of his Muslim friend (of long duration) Noor Islam on November 24, 2011 evening who was hell-bent to have Rs. 15, 000 Samar was having at that time for his own job. Initially, Noor Islam frantically urged Samar to lend the sum as loan. But Samar could not allow Noor to get the loan as that was withdrawn from Bank by Samar from his own savings for his own business.   Being negated, Noor attacked Samar with a sharp sword targeting Samar’s neck. Samar Adak (age 32 years), s/o (Late) Anil Adak, is a resident of village: Baramajhipara, P.S. Singur, District: Hooghly. Culprit Noor Islam resides in nearby area.

The injury as a result of repeated sharp hitting by Noor Islam’s sword was so grave that Samar has been transferred to Calcutta Medical College and his condition is in the balance.

Noor Islam has been taken into custody, it’s true. Now the question arises whether Noor gets punished or police considering this as a prank continues to play with Hindu emotion remains to be seen. But the secular preaching of communal harmony by all the Bengal Political Parties and relay any Muslim friends like Noor or Salauddin are very dangerous in all respect to the non-alert Hindus in Bengal.

As a matter of fact the Muslim perpetrators have fertiled the land of Jihad in West Bengal in the last 34 years of Leftist regime in Bengal. In these last three years of Change phase the ruling TMC is helping the Muslim Jihadists to made a havoc upon the peace loving Hindu people here. Bengal is turning rapidly as a Killing Field of Hindu Kaffirs by the Bangla Jihadists. The graph of Jihad in Mission Bengal Jihad under the camouflage of political rift is so high and drastic, Bengal may be put into a severe situation than Kashmir in a very short span of time.                          ………………………………………………………..[brt30].

The situation of Hindus in the border districts/areas are grave and unbearable. Increasing Muslim population (by un-abetting birth rate) and the Muslim influx from Bangladesh have put a dead peril for the common Hindus through out.