Swami GS Sanand (Prof GD Agrawal) shifted to AIIMS, Delhi after condition worsens critically. GOI is not concerned over a ‘Swami’s health’ and ‘Save Ganga Movement’. 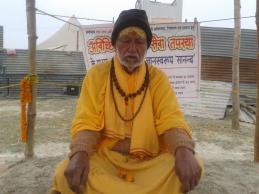 Varanasi:19 Mar 2012:Post Jagran In:  Noted environmentalist G D Agrawal, now renowned as Swami Gyan Swarup Sanand ( disciple of Swami Avimukteshwaraanandah Saraswatee of Jyotirmath, Badarikashram, Himalaya), who is on “fast-unto-death” to press for cleaning up of river Ganga, was on Monday referred from BHU to AIIMS in New Delhi after his health deteriorated further. Read details…..

VARANASI: The district administration shifted scientist-turned-seer Swami Gyan Swarup Sanand to the ICU of SSL Hospital of Banaras Hindu University (BHU) from the emergency ward of SPG Divisional Hospital despite his protest on Sunday afternoon. On Sunday, Swami Sanand’s fastunto-death stir entered in its 10th day. He had already stopped taking food a month back, and also gave up consuming water 10 days back. As a precaution, the district administration had admitted him to the SPG Hospital where he was given intravenous drugs to save his life.

During his stay at SPG Hospital, Union minister Sriprakash Jaiswal had met him as prime minister’s messenger while Union environment minister Jayanti Natrajan had also sent him a letter through district administration. But the seer remained rigid on his stand that until the central government does something meaningful to ensure ‘aviral’ (undisrupted) and ‘nirmal’ (clean) flow of Ganga, he would continue his ‘tapasya’. As he failed to get any desired reply from the Central government, he stopped taking intravenous drugs from Saturday evening.  Read details…..

VARANASI: After failing to get a positive response from the Central government, Swami Gyan Swarup Sanand (noted environmentalist Prof GD Agrawal), who has been on ‘nirjal’ fast unto death stir for Ganga for the past nine days, removed saline drip on Saturday. He made it clear that his ‘tapasya’ (austerity) for the Ganga would continue till any clear cut decision was not taken by the government.

After going without food for a month at Haridwar, Swami Sanand left water here on March 9 to press the Central government for doing something meaningful to ensure undisrupted (Aviral) and clean (nirmal) flow of the Ganga. As a precautionary measure, the district administration admitted him to the Shiv Prasad Gupta Hospital. Union minister Sriprakash Jaiswal met Swami as a messenger of the Prime Minister, who is the chairman of the National Ganga River Basin Authority (NGRBA). But, the meeting failed to reach any decision and deadlock continued. Swami had also warned that he would remove the saline drip on March 17 if government did not respond positively by 5pm. Read details…..

A new rishi to save the Ganga

Determined to sacrifice his life for the Ganga 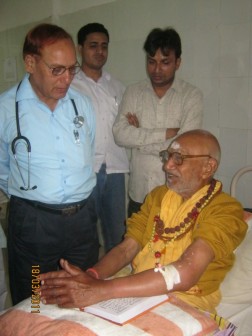 Swami Sanand (Prof.GD Agrawal), after removing his intravenous line in an earlier fasting in Save Ganga Cause. File Photo. N Geo C.

Environmentalist Prof. GD Agrawal now Swami Gyan Swarup Sanand , who left taking even water from Friday the 9th March 2012, is determined to sacrifice his life for the River Ganga (गंगा) . He refused the requests and arguments of local administrative officials regarding a rethink on his decision. “It is not the question of my life, but it is a matter of pain and suffering of Mother Ganga,” he said, putting aside the request for stopping the fast.

Swami Sanand, who had stopped taking food and was just living on water for a month (from February 8 to March 8), left even water on Friday. He lost some weight on Saturday. According to the records of his medical check up, he lost around 1/2kg body weight in the past 24 hours. A  medical team led by additional chief medical officer RP Tiwari examined his health on Saturday afternoon. His blood pressure was 142/72 while his pulse rate was 82 and weight was 49.5kg. Local administrative and police officials, including the additional district magistrate Ram Yagya Mishra and SP  MS Chauhan, met him and requested him to stop his fast unto death.
“In case of his (Swami Sanand) death, another devotee will take over and
the sequence will continue till the goal is achieved,” said Swami Avimukteshwaranand Saraswati, the coordinator of Ganga Sewa Abhiyanam
and disciple of Shankaracharya of Jyotish and Dwarka Sharda Peeth Swami
Swarupanand Saraswati. He forwarded a letter to the Prime Minister through local administration on Saturday, requesting immediate intervention.
According to him, an open letter to the PM was already sent on January 3, 2012 drawing his attention to main concerns. Due respect, importance and
status of a national symbol was not being accorded to the Ganga in spite of her being designated as the National River. The major concerns include unsatisfactory and ineffective functioning of the National Ganga River Basin Authority, continuing construction work on dams/barrages/tunnels which would totally destroy the natural flow regimes and quality of the river water, nod to a new 300MW hydel project, total failure of regulatory agencies in controlling discharge of urban and industrial wastes into the Ganga and complete lack of sensitivity of the government on these issue. Read more…..

Dying for the Ganges: A Scientist Turned Swami Risks All

Will this Swami also Die in Vain?

4 comments on “Swami GS Sanand (Prof GD Agrawal) shifted to AIIMS, Delhi after condition worsens critically. GOI is not concerned over a ‘Swami’s health’ and ‘Save Ganga Movement’.”