Heinous Firing on Sikh devotees in a US Gurudwara on Sunday services. Hindu Existence strongly condemns. 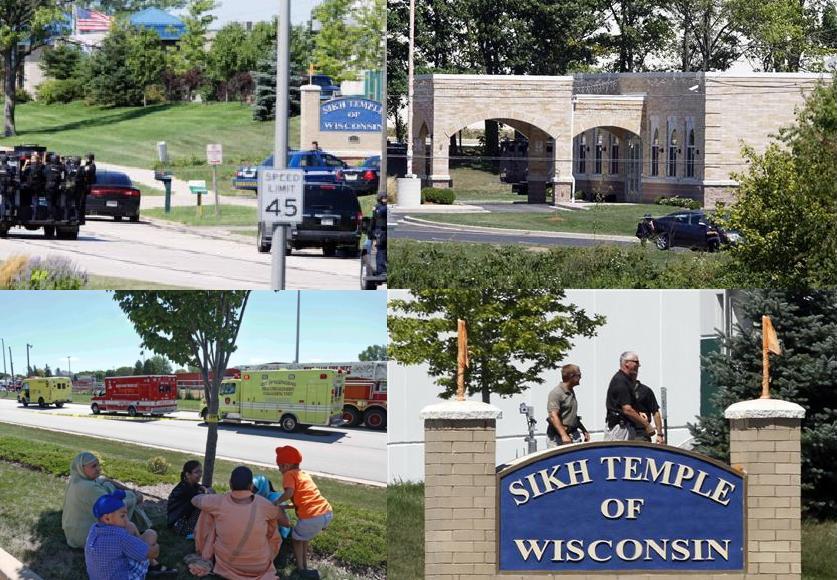 Man with 9/11 tattoo kills six in US Gurdwara 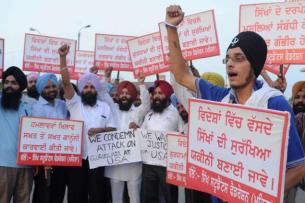 Sikh brothers protest on Gurudwara Killing in US.

WISCONSIN, US |  Monday, August 6, 2012 – A shooting during Sunday services at a Sikh temple yesterday left at least seven people dead, including a gunman, and at least three critically wounded. Police said they believed only one gunman was involved.

A white man with a 9/11 tattoo, that’s how the coldblooded killer who shot dead six persons at a Gurudwara in the Milwaukee suburb of Oak Creek, Wisconsin was described by eyewitnesses.

The 40-year-old man is said to be a resident of the same neighbourhood, entered the Gurdwara from the kitchen side with a gun, when food was being prepared for Sunday community lunch, and started firing indiscriminately. By the time the police arrived and engaged him in a gun fight, he had shot dead 6 persons and injured at least 10.

The senseless killer was shot dead by the police. 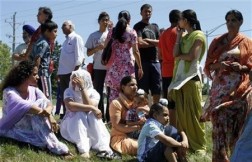 The mass killing began when a gunman or gunmen walked into the kitchen of the Sikh Temple of Wisconsin about 10.30am local time and started shooting, according to congregation members in touch with people inside the building. “It was a very co-ordinated thing. It wasn’t haphazard,” temple member Amardeep Kaleka told CNN.

He said his father was wounded in the attack at the temple in a suburb south of Milwaukee.

Three were shot dead outside, including a gunman killed by a police officer.

He declined to say whether there was more than one shooter, but hours after the attack heavily armed officers were still searching the sprawling temple complex for other suspects.

Milwaukee’s Froedtert Hospital said three men had been brought in wounded and were in critical condition. One was in the operating room, the hospital said in a statement.

The 20-year veteran officer who exchanged fire with the gunman was hit several times, Mr Wentlandt said. He was taken to hospital and is expected to survive.

Witnesses said hostages were being held inside the temple but police did not confirm this. 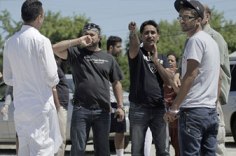 US president Barack Obama, alerted of the shooting at the Camp David presidential retreat in Maryland, said he was “deeply saddened” by the attack, according to a White House statement.

He said his administration would give whatever aid was needed to respond to and investigate it.

The Indian embassy in Washington said it was in contact with the White House’s national security council about the shooting and an Indian diplomat had been sent to the Sikh temple in Wisconsin.

The mass killing in Oak Creek is yet another in a recent rampage by gunmen in suburban America. 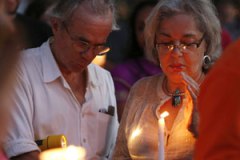 “The gunman is worse than the one at the theater a couple of weeks ago because he targeted an entire community,” said temple member Jagatjit Sidhu.

He was among dozens of temple members and onlookers who gathered in a car park near the temple after police sealed the building off.

The Sikh faith includes belief in only one God and that the goal of life is to lead an exemplary existence. It is the fifth-largest organised religion in the world with more than 30 million followers. 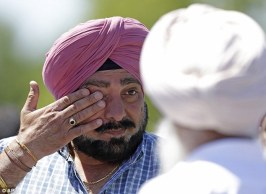 In the US, especially since the attacks of September 11th, 2001, Sikhs have sometimes been confused publicly with Muslims because of their turban headdress and beards. In September 2001, a Sikh petrol station owner in Arizona was shot dead by a man who was said to be seeking revenge on Muslims for the attacks on the US.

Members of the Milwaukee Sikh community complained to police and a state representative last year about an increase in robberies and vandalism at Sikh-owned petrol stations and shops. – (Reuters/Zeenews Bureau).

Courtesy: All links above.

One comment on “Heinous Firing on Sikh devotees in a US Gurudwara on Sunday services. Hindu Existence strongly condemns.”

This entry was posted on August 6, 2012 by hinduexistence in Attack upon Hindus-Sikhs, Hindu-Sikh Protest, Hindu-Sikh Unity and tagged At least seven killed in shooting at Wisconsin Sikh temple, Heinous Firing on Sikh devotees in a US Gurudwara, Hindu Existence strongly condemns on Gurudwara Firing in US, Sikh brothers protest on Gurudwara Killing in US, Wisconsin Gurudwara ~ US, WISCONSIN ~ US.