Pakistani Hindus are India’s responsibility…. We cannot ignore our brothers in distress.

Plight of Pak Hindus: How they are struggling for Indian citizenship

No status in this life… Nahar Singh speaks.

Danish Raza  | Apr 9, 2013 | First Post :: Fifteen year old Radha crossed the India-Pakistan border on the Thar Express in March, hoping for a new life. Since then, she’s lost a child — her third — because of poor medical care and nutrition. She has no home, no income and, starting Monday morning, no country.

Part of a group of 480 Hindu refugees from Pakistan’s troubled Sindh province, Radha arrived on a tourist visa obtained by saying she wished to attend the Maha Kumbh. She’s now staying in a ramshackle building in Bijwasan, on the fringes of Delhi.

Nahar Singh, superintendent of Central Excise and Customs at Delhi airport, and two years short of retirement, has emerged as something of a god for hundreds of Sindhi refugees who’ve been crossing the border in recent years. In November, 2011, Singh says, he first came across a group of 145 Sindhi refugees who were then living in a makeshift camp in North Delhi. He had his two-storey building, then rented out for Rs 70,000 a month, vacated to make room for them.

Singh says he has approached the Foreign Regional Registration Office, the Ministry of Home Affairs and the Delhi High Court to get the refugees Indian nationality — but all in vain.

After staying put in Singh’s property for around six months, adults slowly joined the sea of immigrants to flock to New Delhi every day. However, they also passed on Singh’s contacts to fellow Hindus in Pakistan who were desperate to relocate. The group of 480 who arrived on the Thar Express in March made their way to New Delhi, and made their home in his building. More, Singh says, are certain to follow, because attacks on religious minorities are continuing unabated.

Until the the time the refugees settle in, Singh says, he’ll take care of their meals — and, if need be, expenses. Hindu groups have pitched in, but resources are clearly scarce.

For the families in Singh’s shelter, there is no going back to Pakistan. “I will prefer dying here in Hindustan than living in Pakistan,” says 38 year old Seeta Ram, who is here with 17 members of his extended family. “For us, there is no dignified life in Pakistan. We live at the mercy of Muslims. We cannot openly celebrate our festivals. We cannot cheer for the Indian cricket team”. In case of a clash between two communities, Ram says, he doesn’t expect fair trail. “Their police, their courts,” he says.

Ram’s daughter Karma Bai says her husband has been cursing her ever since they arrived in India. “While he is here with me, his own family is in Pakistan. Please see if you can do anything to get them here,” says the woman, pointing to kids in a family album.

Sindh’s Hindus are largely landless Dalit labourers, hard hit by both religious persecution as well as their low social status and economic deprivation.

For the generation before Seeta Ram, things were not this bad in Pakistan. “When were young, there were no such issues like forcible conversion of Hindu girls to Islam or rape or assaults on Hindu families. If life was not good, it was not bad either. But it all changed after the demolition of the Babri Masjid in India. To take revenge, Muslims in Pakistan demolished temples. We were traumatised,” says the grandmother in one of these families.

In recent years, there have been a string of attacks on Hindus — most famously, the alleged forcible conversion and kidnapping of Rinkle Kumari, which sparked global outrage.

Many among the refugees use angry language, attacking what they see as a Hindu country for denying them citizenship. “I am a Hindu”, says 35-year-old Vasant Das. This is Hindustan. How can I be living here illegally? The government of the biggest democracy in the world cannot take care of 480 people? And anyways, we never asked for partition. Muslims demanded it. So, ideally, Indian Muslims should shift to Pakistan”.

For the government, though, the issues are more complex. Refugees from persecution in India’s near-neighbourhood — like Sikhs from Afghanistan, Tamils from Sri Lanka, or even some Ahmadis from Pakistan — don’t have a right to citizenship, because India fears a tidal wave of claimants. Even though India has often been lauded for its treatment of refugees, it doesn’t have a law that allows them to claim entitlements and documentation.

Delhi authorities have told FirstPost they will ensure the refugees receive visa extensions — but can’t hold out the hope of documents guaranteeing them long term stay. “There are thousands of cases like these”, a senior Home Ministry official says. “Frankly, we know they’ll buy identity documents, and begin a life as Indians. But the law is the law, and its for politicians to change, not us”.

Nahar Singh believes they will meet the fate of the previous 146 immigrants. “Government of India neither gave them nationality, nor did it ask them to leave for Pakistan. They are citizens of nowhere,” he says. [Courtesy: First Post]

Pakistani Hindus prefer to die than going back to Pak 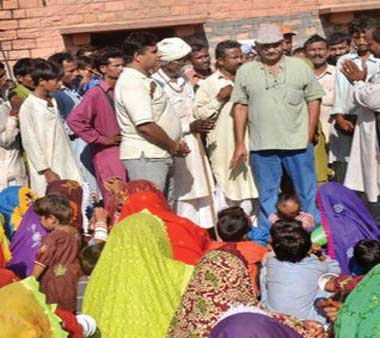 Pak Hindus too scared to return

New Delhi | 10th April 2013:: The Pakistani Hindu refugees, who managed to flee the country and reach India, are opposed to returning to Pakistan, saying they would prefer to die than go back.

“We don’t know what will happen to us. But we know that if we are deported, it will be our bodies, not us. We will die but not return to Pakistan,” Dharamveer, a farmer from Pakistan said.

Facing deportation from India as their visas expired, these refugees are too scared to return to Pakistan following rising extremism there.

On March 9, Dharamveer along with other refugees crossed over to India through Jodhpur in Rajasthan on the pretext of visiting the Maha Kumbh in Allahabad. The group reached Delhi on March 10 and took refuge in a 28-room building owned by Nahar Singh in Brijwasan area in south Delhi.

“Hindus are not safe there (in Pakistan). Daughters are abducted and forced to convert. We can’t cremate our dead as Pakistanis ask us to bury the corpses,” said Dharmveer, who fled Hyderabad in Pakistan’s Sindh province with his wife and four children. “We want Indian citizenship so that at least we can die here peacefully,” he said.

Currently, there are more than 450 Pakistani citizens living in the building whose visas expired just on Monday. The group comprises 83 women, 86 men and 311 children, of whom one died a few days ago.

Nahar Singh, an ex-soldier, who is looking after the refugees, said, “I have written to the President’s office, MEA and UN, but no one has responded yet.”

However, there seemed to be a ray of hope for these Pakistani Hindu refugees facing deportation from India after the government said, “There was a legal procedure available to them”. [Courtesy: JPN/Agencies]

Those who are interested to see the plights of Refugee Hindus from Pakistan, staying in Delhi.

Address of stay of Pakistani Hindus in Delhi:

Ch. Nahar Singh, Ambedkar Basti, Bijwasan, New Delhi.
(Directions: Bijwasan is near Gurgaon and Palam Village. At Bijwasan, take the road adjoining Golokdham Mandir and reach Holi Chowk. From there, take a cut to Ambedkar Basti and reach Shiv Mandir. Ask anyone location of Tower on the road. You can ask anyone about Ch Nahar Singh there. Since a lot of media persons have visited in last few days, it will be easy to get road directions from passer-byes, if in doubt).

Hindu Existence Forum is trying to help the Hindus in Crisis in various ways. Our Lead Team comprising Murari, Dharmender, Gokul are seeing the matters in right approach. If you feel to extend your help to reach these Hindu people in distress.

12 comments on “Pakistani Hindus are India’s responsibility…. We cannot ignore our brothers in distress.”