Aum is universal medicine for All.

Aum is medicine, not just mantra. 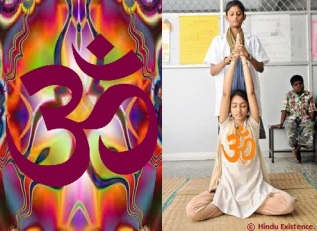 “I used to pray seated in a chair because of acute knee pain from arthritis acquired from long hours of doing business standing. Thanks to the yoga asanas, breathing exercises and the chanting of ‘Aum’, I am now able to kneel on the mat for my namaz five times a day,” said the 50-year-old grocer of MMDA colony in the city, talking excitedly about the wholesome healing experienced at the government yoga and naturopathy college hospital near Anna arch.

“When the doctors explained that chanting ‘Aum’ is not religious but provides therapeutic gain, I readily agreed to follow that. I am happy I did it,” Khader told Deccan Chronicle.

Dr Kanimozhi, assistant professor of yoga, says she had prescribed ‘Aum’ chanting for even cancer patients, along with other naturopathy medicines. “The chant controls the secretion of stress hormones and acts as a pain reliever. It is scientific as the chant creates a neuro and psycholinguist effect while a positive aura forms around your body when you do it.”

There are several patients at the hospital — including Muslims and Christians — who have benefited from chanting ‘Aum’, prescribed along with yoga asanas and nature healers, and gained relief from ailments such as pain, insomnia, stress, stuttering and other speech difficulties.

The case of 55-year-old Edwin, a senior army officer tormented by ankylosing spondylitis for over a year, is another example. He has healed from chanting ‘Aum’ and practising asanas and breathing exercises.

“Edwin’s case sheet reveals that after two months of practice, he could flex his joints and his sleep cycle got normal,” said Dr P. Prabhu, expressing happiness that more and more patients are turning to ‘Aum’ and other natural healers.

4 comments on “Aum is universal medicine for All.”

This entry was posted on June 21, 2013 by hinduexistence in Hindu Heritage, Hindu Scriptures and Hindu Research, Hindu way of Life and tagged Aum for Namaz, Aum is medicine, Aum is universal medicine for All, Aum just not a Mantra ~ a unique healing potency, Aum not just mantra, Government Yoga and Naturopathy College Hospital ~ Chennai, natural healers.