It is not only a Hindu allegation. Shocking 3.2 million Bangladeshi Muslim influx is now a threat to employment, economy, internal security and political imbalance in India. 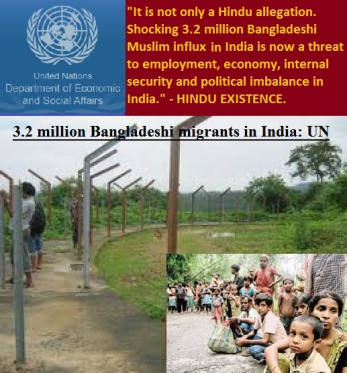 Upendra Bharti | London | Sept 13, 2013:: It is not only a ‘Hindu allegation’ from BJP, Shiva Sena or the Hindu organisations at all. Shocking 3.2 million Bangladeshi Muslim influx is now a threat to employment, economy, internal security and political imbalance in India. The exodus from Bangladeshis into India has for the first time been termed by the United Nations as “the single largest bilateral stock of international migrants” in the eastern hemisphere and also in the developing world. The most of these infiltration from Bangladesh have been occurring under a political permission eyeing to a  Muslim vote Bank politics during the current decades unabated.  While these Muslim migrants are blessed by the political parties helping to get Ration cards, voter cards, other facilities with a declared package of rehabilitation, Hindu migrants from Bangladesh are getting nothing and denied for their legitimate refugee status.

Data revealed on Thursday by the UN Department of Economic and Social Affairs (UN-DESA) shows that in 2013, India was home to 3.2 million Bangladeshi residents who had migrated into the country and settled there.

And it is well known that most of them are Muslims and settled their new Bangladeshi colonies here and there, all over India including the capital of India. There are lakhs of Bangladeshi Muslims in Gurgaon, Jamuna Bank, Okhla, Laxminagar, Sarita Vihar, Waziravad and Jamia Milia areas in Greater Delhi.

Not surprisingly, India was the favorite destination for Bangladeshi migrants in 2013, the report said, as the major political parties excluding BJP  do not want to restrain this flood of Muslim migrants from Bangladesh. In fact, the head screwed non-BJP parties like Congress, CPI (M), CPI, Samajwadi Party, All India Trinmool Congress an others have not the ability to differentiate between the refugee Bangladeshi Hindus came to India due to severe persecution upon them and the infiltrator Bangladeshi Muslims came to India under a certain plan of demographic change in India.

For Indians, however, it was the Middle East that was the clear favorite for migration. Two countries in the Middle East were the main destinations – UAE, having 2.9 million Indian migrants, and Saudi Arabia which had 1.8 million. But, these Indians are not the claimant of any citizenship there, while Bangladeshi Muslim intruders are claiming every facility in Indian including their citizenship.  With the Bangladeshi Muslims, Rohingya Muslims from Myanmar are also creating a big problem in India.

However the biggest rise in the number of Indians migrating to a single country was to the US. In 2013, 2.1 million Indians were in the US, which was also home to 2.2 million foreign-born from China and 2 million from the Philippines.

The UN-DESA report said that since 2000, the number of international migrants born in China or India and living in the US had doubled, whereas the number of Mexican foreign-born had only risen by about 31%.

Asians and Latin Americans living outside their home regions formed the largest global diaspora groups. In 2013, Asians represented the largest group, accounting for about 19 million migrants living in Europe, some 16 million in north America and about 3 million in Oceania.

Europe remained the most popular destination region with 72 million international migrants in 2013, compared to 71 million in Asia.

Compared to other regions, Asia has seen the largest increase of international migrants since 2000, adding some 20 million migrants in 13 years.

John Wilmoth, director of the division, said, “This growth was mainly fuelled by the increasing demand for foreign labour in the oil-producing countries of western Asia and in south-eastern Asian countries with rapidly growing economies, such as Malaysia, Singapore and Thailand.”

The US gained the largest absolute number of international migrants between 1990 and 2013 — nearly 23 million, equal to one million additional migrants per year. The United Arab Emirates recorded the second largest gain with seven million, followed by Spain with six million.

Mr Wilmoth said, “Most international migrants settle in developing countries but in recent years they have been settling in almost equal number in developed and developing regions.”

The figures are released ahead of a high-level global summit on migration and development to be held by the General Assembly in New York on October 3 and 4.

Though the facts as above signify the migration problem all over the world, the Bangladeshi Muslim migrants are emerging a terrible force to capture the economy, employment, politics, culture and area wise demography from the hands of the son of the soil in many ways.

As per experts, Muslim migrants are seen in Jihad activism, halal propagation, local unrest, and Islamization of socio-political affairs. Bangladeshi Muslims are most active in India and in West Bengal particularly to hold demand for their reservation in every sphere, as they have the opportunity to mingle here with their same Bengali speaking, skull capped, bearded brothers and burqa clad sisters.

In India, Muslim migration from neighbouring countries is no more a localized problem in bordering areas, but now every state is facing  a severe illegal Muslim migrant problems in a sporadic manner.

Really, Muslim migration from Bangladesh to India is largest in developing world and it is posing a severe threat to various national aspects.

2 comments on “It is not only a Hindu allegation. Shocking 3.2 million Bangladeshi Muslim influx is now a threat to employment, economy, internal security and political imbalance in India.”