Muslims Capture and Pray inside Hindu Temple in Pak Hyderabad, Then Burn it Down.

Every day Indian Intelligence, RAW and all Political Parties including BJP get such hundreds of news from Pakistan that the Hindus are shrinking into 0%. No Repercussion…..

Hindu temple in Hyderabad broken into, set on fire 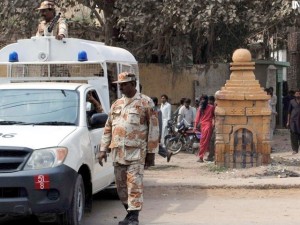 Rangers stand guard outside a temple in Site on Friday. PHOTO: INP

By Z Ali  | The Express Tribune | March 29, 2014:: Three unidentified attackers entered the temple of the Hindu deity, Hanuman, in the SITE area of Latifabad at around 7am. The men prayed for two minutes and then broke Hanuman’s idol before setting the temple on fire. This temple is located in the same compound as the more popular temple of Kali Mata.

“They asked me to let them in because they wanted to pray,” said Darshan, a student of class five, who has been looking after the temple for the last five months. “But, once they entered, they broke the idol, sprayed kerosene oil and set everything ablaze.” The temple’s caretaker, Revo Meghwadh, died five months  ago, after being bitten by a snake inside the temple.

According to Darshan, the faces of the attackers were partly covered so he will not be able to identify them. They escaped without facing any resistance, he added. The fire, which gutted the photos of the Hindu deities hanging on the walls, was put out by the locals.

The temple is located in Kali Mata Colony on the foothills of the Ganjo Takkar mountain range. The colony, inhabited by around 500 to 600 scheduled-caste families, is named after the historic Kali Mata temple, which was located in a mountain cave before the new temple was built. Hanuman’s temple is situated at the colony’s entrance, some 350 to 400 feet away from the Kali Mata’s temple. The attack came weeks before the April 14 fair organised at the temple every year. 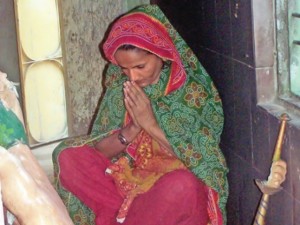 A Hindu woman prays inside the Kali Mata temple in Hyderabad. The Hanuman temple desecrated on Friday is located in the same compound. PHOTO: INP

According to Krishan Kumar, who represents the colony’s community, Hanuman’s idol was placed at the colony’s gate. Last year, a family gave a small room to shift the idol. He refused to accept that Friday’s attacks were caused due to any rivalries.

The people of this area mostly belong to the labour class, he said, adding that they neither fight with neighbouring communities nor have they received any threats. “We have been living here for centuries because of Kali Mata’s temple. Never in the past were we attacked this way.”

The attack triggered protests at Fateh Chowk, Tando Wali Muhammad, Liaquat Colony, Cantt, Bombay Bakery and GOR Colony areas. These protests were, however, attended only by the scheduled-caste Hindus. Those belonging to other castes did not show up at the protests but did issue statements to condemn the attack. Some representatives also visited the temple.

According to DIG Sanaullah Abbassi, the initial investigations suggest the attack did not happen due to any communal strife. Nevertheless, the local DSP and SHO have been suspended and an FIR has been lodged against three unidentified attackers on the complaint of Krishan Kumar.

Meanwhile, deputy commissioner Muhammad Nawaz Soho met the community leaders and assured them that his district administration will pay to remake the idol and the temple.

5 comments on “Muslims Capture and Pray inside Hindu Temple in Pak Hyderabad, Then Burn it Down.”