Dr. Shyama Prasad Mookerjee, the Creator of West Bengal for the protection of Bengali Hindus.

Dr. Shyama Prasad Mookerjee, the Creator of West Bengal as the assured province for the Bengali Hindus in Bharat. 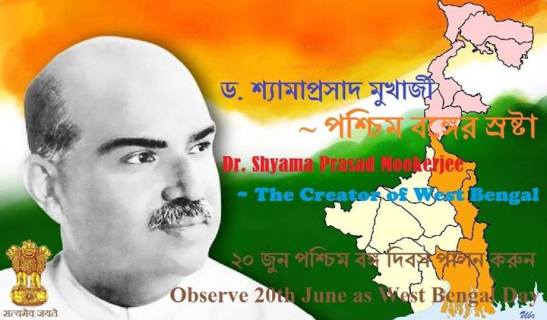 Under the provisions of Government of India Act (1935), Bengal was constituted an autonomous province in 1937. This remained the situation until the Indian subcontinent was partitioned into the two dominions of Pakistan and India after the British withdrawal in 1947. The eastern sector of Bengal, largely Muslim, became East Pakistan  (later Bangladesh); the western sector became West Bengal in India. The partition of Bengal left West Bengal with ill-defined boundaries and a constant inflow of non-Muslim, mostly Hindu, refugees from East Pakistan, but the case of influx of Muslim infiltrators is also a great threat for demographic change of West Bengal in reality.  More than 10 million refugees entered the already densely populated state after 1947, and their rehabilitation has been producing an immense burden on the Bengal administration.

In 1950 the princely state of Cooch Behar (Koch Bihar) was integrated with West Bengal through legislation. After the linguistic and political reorganization of Indian states in 1956, West Bengal gained some 3,140 square miles (8,130 square km) from Bihar. The additional land provided to West Bengal serves as a link between the previously separated northern and southern parts of the state.

But, this straight description of creation of West Bengal in the history with such a low narratives does not flash the history in reality. The Muslim leaguers in undivided Bengal and pre-partitioned India always wanted a large area of Bengal and Punjab to create an extensive Pakistan under their green Islamic design of Pakistan colored with the fresh blood of Hindus through direct action.

One great personality in Bengal emerged on the eastern bank of Ganges in that crisis period to save the western part of Bengal for making a safe and secured land for Bengali Hindus. All though he was an ardent believer in the integrity of the country that he loved so much, when he found that the division of India had become imminent and the emergence of Pakistan inevitable, he joined with similar-minded leaders in demanding division of Bengal on the same analogy of division of India. Thus a portion of Bengal, now named as West Bengal, was saved from the clutches of the Muslim League, and remained with Indian Union. He was none other than Dr. Shyama Prasad Mookerjee, the savior of Bengal Hindus and the creator of West Bengal in all true senses.

In 1905, the first partition in Bengal was implemented as an administrative preference, making governing the two provinces, West and East Bengal, easier. While the partition split the province between West Bengal, in which the majority was Hindu, and the East, where the majority was Muslim, the 1905 partition left considerable minorities of Hindus in East Bengal and Muslims in West Bengal. While the Muslims were in favour of the partition, as they would have their own province, Hindus were not. This controversy led to increased violence and protest and finally, in 1911, the two provinces were once again united.

After it became apparent that the division of India on the basis of the Two-Nation Theory will almost certainly result in the partition of the Bengal province along religious lines, Bengal provincial Muslim League leader Hossain Sahid Suhrawardy came up with a radical plan to create an independent Bengal state that won’t join either Pakistan or India and remain un-partitioned. Suhrawardy realised that if Bengal is partitioned then it will be economically disastrous for east Bengal as all coal mines, all jute mills but two and other industrial plants will certainly go to the western part since these were in an overwhelmingly Hindu majority area. Most important of all, Kolkata, then the largest city in India, an industrial and commercial hub and the largest port will also go to the western part. Suhrawardy floated his idea on 24 April 1947 at a press conference in Delhi.

However,  the plan directly ran counter to the Muslim League’s, which was a political party during the period of the British Rule which advocated the creation of a separate Muslim-majority nation, demand of the creation of a separate Muslim homeland on the basis of two-nation theory. Initially Bengal provincial Muslim League leadership opinion was divided.  Barddhaman’s League leader Abul Hashim supported it. On the other hand Nurul Amin and Mohammad Akram Khan initially opposed it.  But Muhammad Ali Jinnah realized the validity of Suhrawardy’s argument and gave his tacit support to the plan.  After Jinnah’s approval, Suhrawardy started gathering support for his plan.

On the other hand in Congress side, only a handful of leaders agreed to the plan. Among them was the influential Bengal provincial congress leader Sarat Chandra Bose, the elder brother of Netaji Subhas Chandra Bose and Kiran Shankar Roy. However most other Bengal Provincial Congress Committee leaders and Congress leadership including Nehru and Patel rejected the plan. The Hindu nationalist party Hindu Mahasabha under the leadership of Dr. Shyama Prasad Mookerjee vehemently opposed it.  Their opinion was that the plan is nothing but a ploy by Suhrawardy to stop the partition of the state so that the industrially developed western part including the city of Kolkata remains under League control. They also opined that even though the plan asked for a sovereign Bengal state, in practice it will be a virtual Pakistan and the Hindu minority will be at the mercy of the Muslim majority forever.

Although the chances of the proposal seeing daylight without Congress central committee’s approval was slim, Bose and Suhrawardy continued talks to reach an agreement on the political structure of the proposed state. Like Suhrawardy, Bose also felt that the partition will severely hamper Bengal’s economy and almost half of the Hindu population will be left stranded on the Pakistani side. The agreement was published on 24 May 1947.  However this was largely a political agreement. The proposal had hardly any support at grassroots level, particularly among the Hindus.  Muslim League’s continuous propaganda on the two-nation theory for the previous six years combined with the marginalization of Hindus in the Suhrawardy ministry and the vicious riots of Direct Action in 1946, which many Hindus believed was state sponsored, left little room for trust in Muslim League among Bengali Hindus. Soon afterwards, division arose among Bose and Suhrawardy on the question of the nature of the electorate; separate or joint. Suhrawardy insisted upon maintaining the separate electorate for Muslims and Non-Muslims. Sarat Bose  opposed this. He withdrew and due to lack of any other significant support from the Congress’s side, the United Bengal plan was discarded.  The Lion of India (Bharat Keshri), Dr. Mookherjee with a seer propagation of safety and security of Bengali Hindus established the legitimate claim of a separate land of Bengali Hindus within the territory of India, completely excluded from the clutch of communal Pakistan or any blatant conspiracy to suppress Bengali Hindus in the name of an united sovereign Bengal.

As per the plan, on 20 June 1947, the members of the Bengal Legislative Assembly cast three separate votes on the proposal to partition Bengal:

Under the Mountbatten Plan, a single majority vote in favour of partition by either notionally divided half of the Assembly would have decided the division of the province, and hence the house proceedings on 20 June resulted in the decision to partition Bengal. This set the stage for the creation of West Bengal as a province of the Union of India and East Bengal as a province of the Dominion of Pakistan.

Also in accordance with the Mountbatten Plan, in a referendum held on 7 July, the electorate of Sylhet voted to join East Bengal. Further, the Boundary Commission headed by Sir Cyril Radcliffe decided on the territorial demarcation between the two newly created provinces. Power was transferred to Pakistan and India on 14 and 15 August, respectively, under the Indian Independence Act 1947.

Dr. Shyama Prasad Mookerjee adopted causes to protect Hindus against what he believed to be the communal propaganda and the divisive agenda of the Muslim League.   Mookerjee and his future followers would always cite inherent  Hindu  practices of tolerance and communal respect as the reason for a healthy, prosperous and safe Muslim population in the country in the first place. His views were strongly affected by the Noakhali genocide in East Bengal, where mobs belonging to the Muslim league massacred Hindus in large numbers.

Dr. Mookerjee was initially a strong opponent of the Partition of India, but following the communal riots of 1946-47, Dr. Mookerjee strongly disfavored Hindus continuing to live in a Muslim-dominated state and under a government controlled by the Muslim League. Actually, with his prolific political strature and influence, Dr. Mookerjee traumatised Jinnah, Suhrawardy and other Muslim Leaguers for their plan of Pakistan with Muslim dominated areas when the Lion of India roared with a demand for the Hindu dominated areas for Bengali Hindus in the Western part of Bengal.

Unless, Dr. Shyama Prasad Mookerjee partitioned Pakistan to create West Bengal and proclaimed the safety and security of Bengali Hindus form the clutch of Jehadi Muslims, the majority Bengali Hindus had to face the same eventualities as now being faced by Bengali Hindus in Bangladesh and the Hindu minorities in Pakistan.

God sent this savior of Bengali Hindus who created West Bengal and all the peace loving, liberal, tolerant and cultural Bengalis.

8 comments on “Dr. Shyama Prasad Mookerjee, the Creator of West Bengal for the protection of Bengali Hindus.”