The threat of Sharia in Bharat (India) and the need of Uniform Civil Code.

Victory comes there where Truth triumphs

The threat of Sharia on Indian Democracy, Civil Society and Judiciary and the reaction of fundamental Muslim clerics on recent SC ruling to illegality of  Shariat Court in India and the need of Uniform Civil code, setting aside all fanatical hegemony. 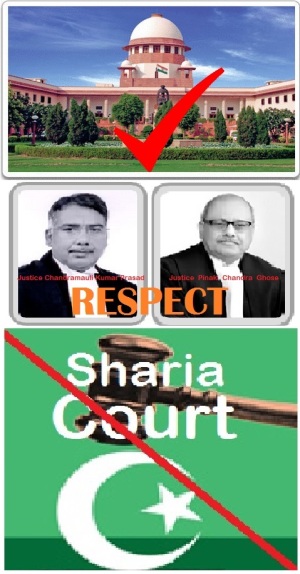 On March 3rd, 2012, a fanatical Shariah outfit named “Shariah for Hind” planned  making agitation before Samsad Bhwan (Indian Parliament) and to lash a blockade there for putting forth their demands on implementation of full fledged Shariat law in India.  With an international (read Pan Islamic) propaganda, they were on demand for the following.

(1)  After weeks of preparation Shariah4Hind would like to announce the official programme for the planned rally for Shariah, in the heart of New Delhi, India on 3rd March 2012.

(2)  We encourage all Muslims who have not already pledged their commitment to the event to ensure they abide by regulations set on the day. For those intending to garner further support for what is likely to be a momentous event we encourage you to download our flyer (to be provided shortly) and distribute them in key Muslim areas in India.

(4)  Muslims will be demanding the immediate return of the Shariah in the Indian subcontinent and their complete rejection of the Indian constitution.

(5)  All protestors will continue to occupy the area until demands are met. Rally of Muslims to rise and unite the Indian subcontinent under Islamic governance.

(6)  Address by Sheikh Anjem Choudary, Judge of the Shariah Court of the UK on the motivations behind the Shariah4Hind project including the declaration of a fatwa regarding Indian political parties.

(7)  Address by special guest speakers from India exposing crimes of the Indian government and why it is prohibited for Muslims to participate in the Indian elections.

(8) Open invitation to accept Islam by former Hindu, Abu Rumaysah, who is now a key person of Islamic conversion and a senior representative of Shariah4Hind.2012 .

(9)  The End of Bollywood in 2012 and Bollywood will get the Axe under Islam and Shariah.

(10)  The eventual Islamic destruction of Indian Idols and Statues.

One bloody designer of Sharia Jihad, Sheikh Anjem Choudary, Judge of the Shariah Court of the UK premeditated all such nuisance against Indian Constitution, democracy and social harmony with the help of a fifth column so far existed in this land very unfortunately.

Hindu Existence Forum with the help of various Hindu groups in Delhi opposed the matter in various legal and administrative forum then and there and successfully stopped the programme.  But, all the  Jihadi preparations for implementation of Shariat Courts in India were under process and finally Shariat Court started functioning formally in Mumbai from April 2013 with a planning to open ‘Darul Qaza’ or Shariah court in Delhi, Kolkata, Chennai, Bangalore also very soon. Such Darul Qaza or Shariat courts already functioning in Hyderabad, Patna, Malegaon, Muzaffarnagar and so on are mainly organized by a body ‘Imarat-e-Shariah‘ (House of Shariah, estt. 1921) headquartered at Phulwari Sharif, Patna, Bihar and now mainly ordained by the dictum of ‘Darul Ifta‘ of Darul Uloom Deoband.

Actually, Sharia, or Islamic law, influences the legal code in most Muslim countries. A movement to allow sharia to govern personal status law, a set of regulations that pertain to marriage, divorce, inheritance, and custody, is even expanding into the non-Muslim areas in East and West with an open Jihadi approach. The bloody Talibans are the most accepted exponents of Sharia laws and its propagation world wide.

Sharia’s gross influence on both personal status law and criminal law is highly controversial. Some interpretations and impositions are used to justify cruel and barbaric punishments such as public flogging, amputation, stoning and execution as well as unequal treatment of women in inheritance, dress, independence and various rights including choice of her life partner. The debate is growing as to whether sharia can coexist in a civil society with secularism, democracy, or even modernity, an idea that is being bitterly tested by several countries in the Middle East looking to rewrite their constitutions in a fundamental hegemony.

The recent controversy over Supreme Court’s ruling on the illegality of functioning of Shariat courts in India and the fundamental hue and cry of the functionaries of Muslim Personal Law Board and the profound Deobandis have attracted public attention about the crude conspiracy to challenge the civil and criminal laws by the Shariat propagators.

In recent ruling,  the Hon’ble Supreme Court of India has denied the sanctity of the Shariat Courts  issuing various Fatwas even contravening the existing laws in force. On July 7th, a bench of Justice Chandramauli Kumar Prasad and Justice Pinaki Chandra Ghose pronounced that “Whatever may be the status of fatwa during Mughal or British rule, it has no place in independent India under our constitutional scheme” . It goes further that “Any person trying to enforce a fatwa by any method shall be illegal and has to be dealt with in accordance with law”, in a case of Vishwa Lochan Madan vs. Union of India & Ors., Writ  Petition (Civil) No. 386 OF 2005.

“A fatwa has no legal sanction and cannot be enforced by any legal process either by the Dar-ul-Qaza issuing that or the person concerned or for that matter anybody. The person or the body concerned may ignore it and it will not be necessary for anybody to challenge it before any court of law,” said Justice Chandramauli K Prasad, who authored the judgment.

“In case any person or body tries to impose it, their act would be illegal. Therefore, the grievance of the petitioner that Dar-ul-Qazas and Nizam-e-Qaza are running a parallel judicial system is misconceived,” the designated bench opined.

Having been bizarred by the fatwas from mushrooming Shariat courts here and there, covering almost the entire spectrum of social life of Muslims ranging from matrimonial matters to dress code for women and its ill effect on the other part of the civil society as Taliban in Kashmir prohibited wearing ‘bindi in forehead of female — from asking Muzaffarnagar’s Imrana to treat her husband as her son after she was raped by her father-in-law to banning a popular all-girls Kashmiri musical band leading to its disbanding, an advocate Vishwa Lochan Madan  filed a PIL questioning jurisdiction of Shariat courts, Dar-ul-Qaza (personal law courts), Nizam-e-Qaza etc. and Deoband muftis in dictating social behaviour of citizens and, in the process, virtually sprawling up a parallel judicial system on issues relating to Muslim personal law in a very challenging mode of action.

In fact such stanch Sharia mentality and Jihad in its core was the main force to drive away lakhs of Kahmiri Hindus out of Kashmir valley after independence or the sole cause of partition of India. Propagation of Shariah courts directly or indirectly helps the division of people under a mandatory law and leads to another partition of India in many ways.

Interestingly, while the authority of Shariat Courts in India deal with Talaq (I divorce/talaq you); Fasakh (both the husband and wife are given the rights to dissolve their marriage in various ways);  Khula (dissolution of marriage by agreement,  When the aversion is on the side of the wife and she desires a separation); Mubaraat (dissolution of marriage by agreement, When the aversion is mutual and both the sides desire a separation); Takliq (divorce for breach of condition in the marriage contract); Li (When husband accuses his wife of adultery or denies occurred child conceived by her as a child); Ila (that is when one spouse to swear by Allah or by mentioning the nature of Allah to not to have sex with his wife for four months or more, or with no mention of the time period);  Zihar (that is when a male person equating her conjugal counterpart with the back of his mother’s back or persons prohibited to marry him) or such matters, these courts restrain themselves to pronounce any fatwa of flogging, amputation, stoning or execution for any crime of theft, murder, adulteration, blasphemy so far as these may lead their arrest and conviction under Indian Penal Code and Criminal Procedures. It is not heard about any case registered in the Shariat Courts in India for taking ‘haram’ interest from general banking system or seeing ‘haram’ films cinetized by kaffir hero-heroins. The shariah maroons in India have their plan to standardize Shariat Courts only to maintain a masculine might of Islam upon female clan for putting them in burka bondage, increasing Muslim population and to humiliate Indian judiciary system.

Naturally, the current ruling of the apex court could not satisfy the double standard Shariah propagators in India. In this context the All India Muslim Personal Law Board (AIMPLB) had told the apex court, “Establishment of a network of judicial system throughout the country to help Muslims get their disputes settled by qazis may not have police powers but shall have the book of Allah in hand and Sunnat of the Rasool and all decisions should be according to the book and the Sunnat. This will bring Muslims to Muslim courts. They will get justice.”

But, there is no way to believe the AIMPLB or Darul Uloom Deoband versions as we see a clear hand of ISI (Inter Services Intelligence) of Pakistan in every sphere of life to capture Indian Muslims for a filthy provocation of Jihad. Proliferation of Shariah and Shariah Courts in Indian perspective cannot be separated from Global Jihad and Pan Islamism. Shariah is not now pertaining only to personal belief  or social practice, it is a threat to Indian and World Economy by a challenging ‘Islamic Banking’ and a ‘Halal’ monster trying to control others life-style and practice under Islamic certification.

The highest court in India categorically stated that, “The object of establishment of such a court may be laudable but we have no doubt in our mind that it has no legal status. It is bereft of any legal pedigree and has no sanction in laws of the land. They are not part of   the corpus  juris of the State. A Fatwa is an opinion, only an expert is expected to give. It is not a decree, not binding on the court or the State or the individual. It is not sanctioned under our constitutional scheme. But this does not mean that existence of Dar-ul-Qaza or for that matter practice of issuing Fatwas are themselves illegal.”

Experts say that authentication and implementation of Shariah Courts in India is nothing but an extension of The Federal Shariat Court (FSC) of Pakistan in India in a very scrupulous design. FSC of Pakistan has the power to examine and determine whether the laws of the country comply with Shariah law or not. The Jihad generated from Quran and continuously transmitting from its Pakistani bandwidth is now trying to reach every Muslim locality through Shariah Courts in India.

Everybody must welcome the ruling of Hon’ble Supreme Court of India, nulling the status of  Shariat Court. We demand complete ban on Shariah Courts in India and pledge for a Uniform Civil Code here by the virtue of  ‘India is Secular‘ so far!

Related:  Sharia as a Platform for Espousing Violence and as a Cause for Waging Armed Jihad: Moorthy S. Muthuswamy.

UNIFORM CIVIL CODE – It is time to revisit this issue: R. Upadhyay.

2 comments on “The threat of Sharia in Bharat (India) and the need of Uniform Civil Code.”