SABJP demands citizenship for Bangladeshi Hindus staying in Assam and elsewhere in India.

Sudhendu Talukdar (on mike) while expressing his views during demonstrations in New Delhi.

By Special Correspondent | New Delhi | 29 July 2014::  On Saturday, 26th July, an Rights forum called ‘Sara Assam Bangali Jateeya Parishad (SABJP)’ staged demonstrations at Jantar-Mantar, New Delhi, the place of demonstration in Indian capital,  demanding citizenship for Hindus who have come from Bangla Desh. Later, representation was submitted in the name of Prime Minister, Narendra Modi and BJP’s national President, Amit Shah. Shri Sudhendu Talukdar of SABJP, Shri. Pradip Muzumdar, Vice President of ‘Kaali Mandir Samiti’, Dr. Charudatta Pingale, national Guide of Hindu Janajagruti Samiti, its Shri Vinay Panwalkar and other Bengali Hindu activists, who had come from Assam, participated in the demonstrations. Shri. Talukdar said, “Narendra Modi had promised before elections that Bangla Deshi Hindus would be given Indian citizenship after his coming to power; but he seems to have forgotten about it. He should keep his promise.”

Bengali Hindus came to India from Bangladesh to get rid off religious atrocities, must be given Indian citizenship: Sudhendu Mohan Talukdar, Advisor, SABJP.

In his speech Shri Talukdar said: More than On Crore Hindus have taken refuge by running away from the clutches of fanatics of Bangladesh (Erstwhile East Pakistan) at the time of partition of India in 1947 and at the time of Liberation War of Bangladesh in 1971.   The atrocities and persecution on minority Hindus in Bangladesh is tremendous. Time to time Hindu minorities compelled to take refuge in Bharat under compulsion. However, if they are sent back to Bangladesh, it would be very similar to sending cows back to butchers that have been rescued from their clutches ! Will BJP Government understand this grave issue ?

In 2007, Congress State Government of Assam has detained some suspicious persons amongst Hindus and Muslims; on the basis of an order issued by the State Government and Hindus, who have come here from Bangladesh few decades ago, are treated with bias and repression. Release of such Hindus also made as one of the demands during the agitation. Sri Talukdar demanded reasonable and respectable status of Hindus came from Bangladesh as equal citizen of India, keeping them out of the list of ‘D’ (doubtful) voters list.

Talukdar praised the role of Hindu Janjagruti Samiti as a key organisation for making continuous efforts to fortify the integrity of the National and helping all small nationalist forums to get their right and natural justice in all possible ways.

Dr. Charudatta Pingale said while guiding demonstrators, “The rulers are responsible for this condition. A king who cannot recognize loyal citizens, who does not know who are the true sons of the soil, is unrighteous. In such situation, unity is the only solution forgetting own language, region and caste etc. We should proclaim that ‘Hindu is our only identity’. If the rulers do not take any action, Hindus will have to get ready for ‘Dharma-kranti’ and the Government will be responsible for outcome of such ‘Dharma-kranti’.”

Shri Pradeep Muzumdar said, “People, who strived to get freedom for the country, are deprived of getting citizenship which is very unfortunate. The agitation will be intensified in future, if no action is taken by the Government.” 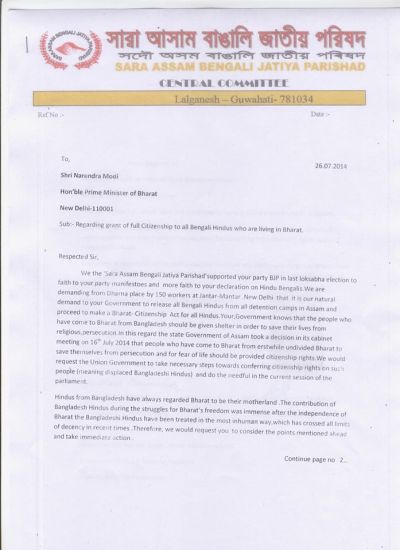 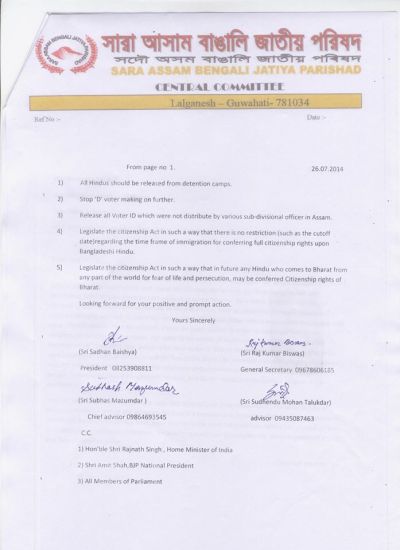 Next Programme in the same issues.

It is retrieved from the source of SABJP that Bharat Raksha Manch is going to hold its National Convention on the problems of Bangladeshi Hindu Sharnarthi (BD Hindu refugee) and Bangladeshi Muslim Ghuspetian  (BD Muslim infiltrators) in the month of October this year in Bhopal, the state capital of Madhya Pradesh.

6 comments on “SABJP demands citizenship for Bangladeshi Hindus staying in Assam and elsewhere in India.”