Oh Shikh, Chela of Gurus!! Will you only see the Jihad and attack on Gurdwaras?  Flame on the swords of Gurus and protect Dharma!!! 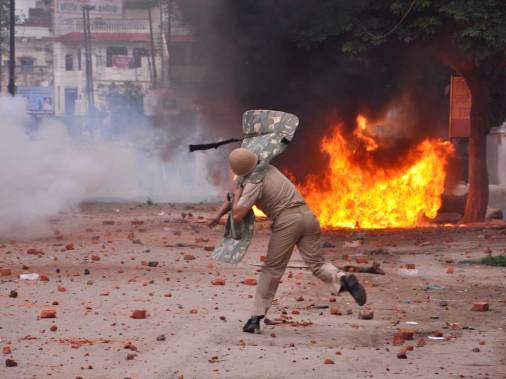 S. Raju |  Hindustan Times |  Meerut, | July 26, 2014:: Communal violence left Uttar Pradesh bloodied again with three killed (Five killed as reported by Jagran Website: HE Editor) and several injured in a clash between Sikhs and Muslims in Saharanpur on Saturday. Curfew was clamped and shoot-at-sight orders given against rioters.

The two groups fought pitched battles and burnt several vehicles, as home minister Rajnath Singh spoke to chief minister Akhilesh Yadav who assured him that the situation would be contained soon.

The communities, who clashed over construction on a disputed plot, fought with firearms, swords and stones and torched shops and vehicles.

One of the deceased, Sanjeev Kochar, died of bullet injuries. The second victim was identified only as Arif while there was no confirmation of the third’s identity. A constable and a home guard sustained serious injuries as the police stepped in to control the rampage.

They are both in critical condition.

The situation continued to be tense till late Saturday, as heavy security was deployed by the state government, officials said.

Over a dozen policemen were also injured in the violence. Curfew continues in a few areas under six police stations.

Police have arrested over a dozen people for inciting violence over a land dispute and sources in the home department said the tense situation was now under control.

Read: UP govt announces aid of Rs. 10 lakh to kin of deceased

Eight companies of the Provincial Armed Constabulary (PAC), six of the Central Reserve Police Force (CRPF) and two companies of Indo-Tibetan Border Police (ITBP) were deployed in the violence-hit areas.

Akhilesh Yadav has sought a detailed report on the clashes from the director general of police (DGP) AL Banerjee and chief secretary Alok Ranjan.

A team of home department and senior police officials also briefed the chief minister on the day’s developments.

Punjab chief minister Parkash Singh Badal also spoke to Akhilesh Yadav and expressed concern over the incidents that unfolded in Saharanpur during the day.

The rampage reportedly continued for several hours. “They broke shutters, torched shops and vehicles and fearlessly roamed around the area for hours,” said Amanpreet Singh, a member of the Guru Singh Sabha. The sabha claims the plot belongs to the gurdwara near which it is located while the Muslims call it a holy spot for the community. The matter is in court.

The fight allegedly began after the Sikhs started construction on the plot early Friday, and it turned ugly in no time, spreading to the old city areas.

The sabha officials claimed they had the court’s permission to do construction.

“We have the court order but whenever we approached the police for protection for the construction, they never paid heed to our request,” Amanpreet Singh said.

Bharatiya Janata Party (BJP) and Congress leaders condemned the violence and slammed the state government for its failure to control the law and order situation in the state.

The BJP’s state spokesman Vijay Bahadur Pathak said it was most unfortunate that while the state government did not miss any opportunity to blame his party for any communal tension, the government’s failure to check small incidents was at the root of all troubles in the state.

Congress vice-president Rahul Gandhi in a statement in New Delhi expressed his sadness at the communal clashes in Saharanpur.

“I am deeply saddened to hear of the clashes in Saharanpur,” Gandhi said.

Tension also brewed in Kanth area of Moradabad district as the BJP refused to back out of its proposed protest against district officials for “victimising its cadre”.  Read full report here.

Jathedar of Akal Takht directs to cancel all panthic conventions due to Saharanpur clashes:: TOI.

All you want to know about the Saharanpur riots in Uttar Pradesh: India.Com.

38 arrested; curfew to be relaxed for four hours Monday: DNA.