Another ‘love jihad’ case comes to light in Jharkhand. 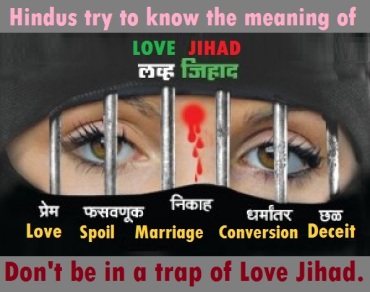 Alok K N Mishra | TNN | Ranchi | Aug 29, 2014:: Another case of alleged love jihad was reported from Chatra district where police on Wednesday jailed a Muslim boy for deceiving a Hindu girl by faking his identity.

Last week, the boy had eloped with the girl, who is now eight months’ pregnant, forcing her father to lodge an FIR with Pratapur police station.

On Thursday, BJP workers and activists of Vishwa Hindu Parishad (VHP) said it was another case of love jihad and called a daylong bandh in Chatra demanding justice for the girl.

Chatra SP Prashant Kumar Karn said: “The father of the girl had lodged a case of kidnapping against the boy following which he was arrested and sent to jail.” He clarified that no case of forceful conversion to Islam was lodged against him.

He, however, said: “It is true that the accused is Muslim and the victim is a Hindu.”

VHP in charge of Chatra unit, Vijay Pandey, claimed that the girl had confided in him that she was unaware about the boy’s faith. “He introduced himself as Sonu Kumar and also had tilak on his forehead. He worked as a conductor in a private bus which the girl used to take regularly to go to her college,” Pandey quoted the girl.

The two have been together for the last three years, he said. VHP state general secretary Ganga Yadav said the issue is a very sensitive one as it comes just after the Tara Shahdeo case.

“We have demanded a police inquiry into the whole incident,” said Yadav.

TNN | Ranchi | Aug 29, 2014:: Police sent the minor girl in Chatra, who was deceived by a Muslim boy, to a probation home in Deoghar on Friday following a court order.

The girl eloped with the boy last week but later came to know that he was Muslim and had faked his identity.

While Hindu organizations are seeing ‘love jihad’ conspiracies, the parents of the girl had lodged a case of kidnapping after which the boy was arrested and sent to jail on Wednesday. Investigating officers said on Friday they would soon record the statements of the girl’s neighbours. Chatra SP Prashant Kumar Karn said, “The court ordered us to send the girl to Deoghar probation home. We will record the statements of the neighbours.”

The accused, Muhammad Ehshan, faked his identity and introduced himself to the girl as Sonu Kumar. Last week, the boy had eloped with the girl forcing her father to lodge an FIR with Pratapur police station. The girl’s father had told in his complaint that the boy “sexually exploited” his daughter, who is in her advanced stage of pregnancy. However, it is not clear how the girl’s parents did not understand her health condition.

Police said they would also record the statements of the boy’s relatives at Lawalong in the district to solve the puzzle.

The two escaped from Pratapur to Lawalong. “His relatives saw him with a girl but refused to to give them shelter. They informed us about the boy’s whereabouts leading us his arrest,” said Karn.

During interrogation, Raqibul accepted he had invited kazis to his house and conducted formalities of nikah with Tara after their Hindu-style marriage at a Ranchi hotel in July because he had a liking for Islam.

Holding a press conference later in the day, Ranchi SSP Prabhat Kumar said: “The evidence gathered from Kohli’s house suggests that he is a Hindu. About the nikah, he told us he was fond of Islam’s practices.” It is not clear how kazis came to his house to conduct nikah knowing well that he was a Hindu. “We will look for the kazis and find out what information they have. It is difficult to believe kazis would conduct nikah for Hindu couple,” said Kumar.

Police, however, failed to recover the papers signed during nikah from Kohli’s house house. They were married in May and just 40 days into the marriage, Tara lodged an FIR against Raqibul alias Ranjit under IPC sections 498A (dowry) and 295A (deliberate and malicious act intended to outrage religious feelings of a class by insulting its religious beliefs.)

“There are some contradictions in his statements. We will conduct a narco-test if necessary,” said Kumar. Kohli told police he had informed Tara about his religious inclinations before marriage. Kohli is a 10th grader, said Ranchi city SP Anoop Birthary.

Alok K N Mishra | TNN | Ranchi | Aug 29, 2014:: Members of Vishwa Hindu Parishad and several Hindu organizations, which have called a daylong bandh in Ranchi to protest against the alleged love jihad and attempt to forceful conversion Tara Shahdeo to Islam, went on the rampage on Monday.

Police personnel, who were deployed to control the law and order on Monday, were outnumbered by protesters, who went berserk and vandalized several shops and roadside stalls, damaged vehicles and attacked drivers. Police had to resort to lathi-charge.

Though most of the vehicles were off road and most shops were closed, some took the risk of coming out of the house only to invite protesters’ rage. The protesters clashed with cops at Albert Ekka Chowk, Sujata Chowk and Birsa Chowk.

“The bandh was largely peaceful during which we also detained several bandh enforcers. They were released later,” said city SP Anoop Birthary.

“One of our activists is admitted in RIMS and more than half a dozen were injured,” said Mishra.

VHP in a letter sent on Monday sought intervention of Union home minister Rajnath Singh in the case. 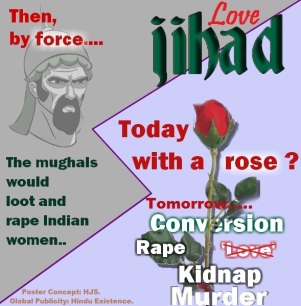 VHP state general secretary Ganga Prasad Yadav said: “Tara Shahdeo case is the second case of love-jihad reported recently in Jharkhand. Two months ago one case of love-jihad was reported in Jamshedpur. We have requested the home minister to intervene into the matter and save the Hindus.”

The “Love Jihad” – by Stephen Brown:: The Frontpage Magazine.

Courtesy: TOI | The links used above.