World Hindu Congress concludes with acute formalities and without penetrating into the real sufferings of World Hindus. 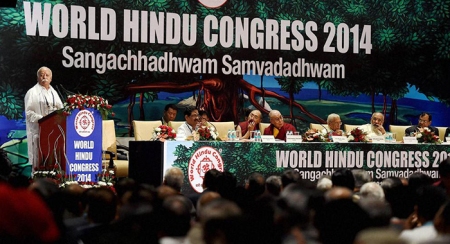 HENB  |  New Delhi | November 23, 2014:: The three-day World Hindu Congress concluded here today, raising formal concerns over conversion and giving a call for the preservation of the community and cultural identity of Hindus. But the Hindu Congress failed to say any word against the ‘secular’ threat against Bharat (India), which is the most dangerous element to destroy the ‘dharmik’ threads in this land of Sanatan Vedic Hindu Dharma.

Addressing the conclave on the concluding day, RSS’s (Rashtriya Swamsevak Sangha) second-in-command, Suresh (Bhaiyyaji) Joshi, said that the challenge before the country today was the preservation of its culture and civilisation even as he urged the participants from across the globe to rise to the task.

International Working President of VHP, Praveen Togadia, claimed that Hindus have been converted on a large scale not only in India but across the world through temptation, intimidation and pressure.

He said that VHP is making a plan to ensure full security for Hindus. Certainly, God knows their planning.

The three-day World Hindu Congress, which began on November 21, sees deliberation on several subjects relevant to Hindu society. The conclave is being organised by Vishwa Hindu Parishad (VHP) as part of its Golden Jubilee celebrations.

Addressing the inaugural ceremony of the World Hindu Congress, RSS Sarasanghachalak Mohan Bhagwat said: “The world always needs Hindu thought or Indic tradition. It is the responsibility of Hindus to teach and guide the world.

Hindu is someone who sees unity in all human diversity. Leadership based on Hindu values and tradition is essential for the world. Let’s provide the world such leadership.”

But, RSS Sarasanghachalak Mohan Bhagwat’s version relates only such a leadership exclusively epitomized for the RSS and BJP men and not the others.

Tibetan spiritual leader the Dalai Lama, who calls himself a good Hindu, said a sense of oneness is needed among human beings.‎ Unfortunately, the Buddhist highest leader forgot to mention any word of consolation for the murdered and terrorized lakhs of Tamil Hindus in Sri Lanka by the Rajapakshe Govt and his predecessors there. 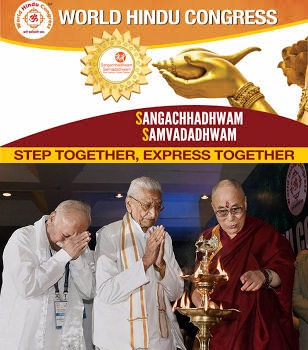 Around 1,500 delegates, from 40 countries, are attending the World Hindu Congress. The delegates of the conclave include those committed to working for Hindu rise and resurgence. The participants have representatives from amongst the Yazidis and Hindus of Pakistan.

Pointing out the problem of Hindus in Kashmir, Dr Ajay Chrungoo, chairman of Panun Kashmir, an organisation and movement of displaced Kashmiri Hindus, said: “Despite more than 3.5 lakh of Hindus being pushed out of the Kashmir valley over the years, the political class across the spectrum in the country, including the BJP, still consider it a small issue and is less serious about it,”

No political party in India, including the BJP, is sensitive enough to the genocide of Hindus in Kashmir and their expulsion from the state. While the fate of Kashmiri Hindus remains uncertain, other pockets within the country such as West Bengal and Assam are on the path to becoming another Kashmir. This was the view social groups and activists working in Kashmir expressed at the World Hindu Congress.

Astonishing enough, this RSS folded VHP summit in Delhi in the shape of ‘World Hindu Congress’ did not surface highly and properly its agendas in the matters of re-establishment of Hindu Rashtra in Bharat and Nepal, Hindu Genocide in Sri Lanka by fundamental Buddha Sasan, suppressed (Hindu-Buddhist) ethnic cleansing in Bangladesh by Islamist,  leading to zero % Hindus in Pakistan and Afghanistan, Islamic and Christian aggressions in Hindu life, ISIS genocide of Yazidi Hindus in Iraq and various threads  of Hindu contra-currents dethroning them from a sphere of  real Hindu empowerment in a struggle for Hindu existence.

The World Hindu Congress, 2014  failed to conceive any fruitful resolution to overcome the Jihad and Evangelic threats in Bharat and upon Global Hindus.