Why Muslims should not be allowed to purchase new flats, lands etc. in non-Muslim areas?

Muslims are not allowed to purchase new flats, lands in Hindu majority areas in India to avoid certain Islamic problems. The world should follow it.

Muslim businessman sells out his house after VHP protest 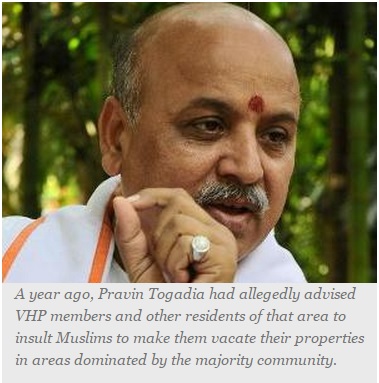 PTI | Ahmedabad | Apr 8, 2015:: A Muslim businessman sold off his house in a Hindu majority locality in the sanatorium area of Bhavnagar city apparently after a protest by the right wing Vishwa Hindu Parishad (VHP) here.

“A Muslim businessman had purchased property worth lakhs of rupees in a Hindu-dominated locality in the Sanatorium area of Bhavnagar city, after which the VHP launched a protest.

Programmes like singing of Ram dhuns and Ram bhajans were organized after which the businessman finally sold off his property (house),” VHP’s Bhavnagar city president S D Jani said. A year ago, VHP international president Pravin Togadia had allegedly advised VHP members and other residents of that area to insult Muslims to make them vacate their properties in areas dominated by the majority community.

Jani, who resides in the Meghani Circle area of Bhavnagar claimed that Togadia had stayed at his residence when he made those inflammatory remarks.

Why Muslims should not be allowed to purchase new flat, land etc. in non-Muslim areas?

Muslims are not being allowed to purchase new flats, lands in Hindu majority areas in India to avoid certain Islamic problems. This happened a case of Bhavnagar as reported here. But rest of the world should follow it and must not allow the prospective Jihadists to come closer to attack us by any means under Quranic dictum.

Mind it all muslims are potential Jihadis or as such in favourable situations. Who disagree to vow in Jihad or deny to fight against Kaffirs unto death, are not a Muslims at all.

Here are Ten points why you must resist them in your non Muslim locality.

1. Islam is an aggressive imperialism. If you allow them anyway, they will try to Islamize your identity and sovereignty. When the purchase a piece of Land or occupy it anyway through lease or rent, it’s nothing but a Land Jihad. To access a possession for further Jihad.

2. Islam challenges your Nationality, Culture, Democracy and Freedom. If you allow Islam in your locality, then it will invite problem to your life process.

3. The Quran, Hadith, Fiq, Sharia, Halal all are just contradict and to eliminate you. If you invite them in your locality, eventually you will be put into a cauldron of contradictions to boil you all the time.

4. Each Muslim possesses in mind to make a Mosque in their locality. After getting entry in your locality they must build a Mosque and think of five times Adhan to proclaim the world under Allah and Muhammad. You have to bear most irritable Islamic slogans to take guns against you, five times a day. And from this Mosques they continue all Islamic preaching against you, belittling tour religion, custom and culture.

5. Just think they are growing as you allowed. The Burqa clad women are passing you, those liberty has been snatched under Islamic bullying. But, you don’t know how many of them are male Jihadis under Burqa or suicide bombers.

6. Would you like pool of blood in the name of Qurbani. But, they will make it Halal and you have to find another way to avoid such gory scene, their horrific jubilation for purporting the cruelty to animal and the screaming of the tortured animals in Baqar Eid. But, this taxation is levelled upon you, just you allowed them.

7. There will be jam in the streets and roads in Friday noon. Police will be helpless and yours business will be blocked for Namaj. They will perform Namaz in the open roads and streets, only to show their might and right over you people, just allowed them in your locality.

8. Your girls and women will be scared and more vulnerable in the hands of Love Jihadists. They love white flesh. They will target your dears, sisters and girl friends. They love non Muslim girls to have sex with them so Islamically to use them as machine for production and blast both. You may face these problems more acute, when you keep them as much as closer to you.

9. Are you sure, that your next door neighbour is not a member, warrior, supporter of ISIS, Al Qaeda, Boko Haram or any extremist Islamic organisation! You are in a danger if you allow any Muslims in your locality to reside, to rent a flat or to purchase a piece of land. If you do so, you are connecting deadly Jihad and all Islamic brutality with your locality.

10. They have never allow you, respect you, give equal rights to you in their locality. Take the history books. Franchise your experience. You will gather only a dreadful and humiliating evidences against you. Then, why should we allow  Muslims in our locality, when they believe in Pan Islamism and not Pan Humanism.

Bohri Muslim businessman Ali Asghar Zaveri, who deals in scrap refused to make any comments on the issue.

When asked about whether he was forced to sell his house under pressure from religious outfits, he said, he was “busy”. According to Chetan Kamdar of Bhavnagar-based real estate firm ‘Bhumit Associates’, who purchased the house, they bought it as per market rate and they are not aware about the fact that the Muslim businessman was pressurized by some religious outfits. “We bought his house for around Rs 55 lakh, which is in accordance with the prevailing market price, while he (Zaveri) had purchased it a year ago for about Rs 44 lakh. We got to know of this property from a city-based broker and so we purchased Zaveri’s plot as well as an adjacent plot,” Kamdar told . “We were not aware about any pressure from religious outfits. Both the parties are happy with the deal. So it was done accordingly,” Kamdar said.

5 comments on “Why Muslims should not be allowed to purchase new flats, lands etc. in non-Muslim areas?”

This entry was posted on April 9, 2015 by hinduexistence in ANTI JIHAD, Conspiracy against Hindus, Conspiracy against India, Islamic aggression in Cultural life, Islamic Aggression in Social Life, Islamic Conspiracy against Hindus, Islamic Conversion, Islamic Menace, Islamic Terrorism, Land Jihad, Say No to Islam, SAY NO TO RADICAL ISLAM, Say No to Sharia, STOP MOSQUES IN HINDU AREAS, World under Islamic Aggression and tagged 'Bhumit Associates', Ali Asghar Zaveri, Bhavnagar, Islamic problems, Muslim businessman sells his house after VHP protest, Muslims are not allowed to purchase new flats, Muslims in Gujarat, Why Muslims should not be allowed to purchase new flats.