Yoga and Surya Namaskar can be practiced by anybody. Hinduism has no bar to adorn anyone. 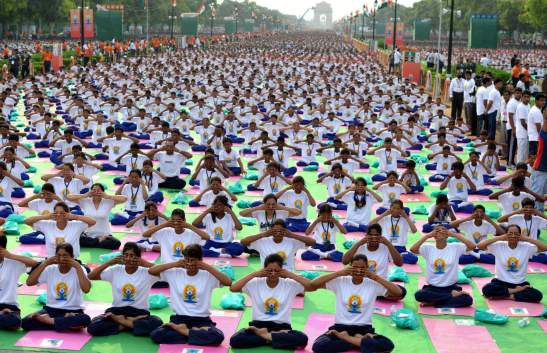 NEW, DELHI – INDIA: Indian Prime Minister Narendra Modi (not seen) performs yoga along with others at Rajpath during mass yoga session to mark the International Day of Yoga on June 21, 2015 in New Delhi, India. An estimated 40,000 people participated in the celebrations at Rajpath, with around two billion people taking part across the world. The yoga celebrations are being organised after the United Nations had in December last year declared June 21 as International Yoga Day. (Photo by Vinod Singh/Anadolu Agency/Getty Images)

How Surya Namaskar Helped Me Come Closer To Islam.

The moment I had Muslim + Yoga + Hindu + Surya Namaskar pop up on my newsfeed in one headline.

I couldn’t resist but write this.

But before I begin, let me introduce myself: Muslim, girl, religious, spiritual, yoga teacher and practitioner.

Read this also: Nearly 36,000 People Set a Record In India for the World’s Biggest Yoga Session.

Now let’s cut to the chase. This whole ‘yoga is un-Islamic‘ banter is absolute rubbish. Let’s work backwards. I want to track back to the essence of all Islamic practices, i.e. intention.

Yoga is the practice of syncing the mind and breath with the help of asana and meditation practices. And the Surya Namaskar in question, is a set of asanas combined to achieve the above.

Yes honey, it’s called Surya Namaskar. And no, it is not the equivalent of worshipping the sun.

Ancient and traditional yoga applied this as a practice to connect deeper into a yogi’s spiritual connection to God since their life was consumed spending hours in meditation and surrendering their mind and soul in search of inner peace and to find God.

That being said, nobody in today’s day and age stands facing the sun to worship it and perform a set of physically challenging poses solely for that intention and purpose. If you want to worship the sun, you get up, hold your hands in prayer, and pray to it. When you do a physical practice facing the sun, I doubt that makes it an act of worship.

As a Muslim, attending a yoga teacher training was at first a major culture change. (Notice I call it a change and not a shock.) There is chanting of OM, reciting of slokas, discussing god, and such. But when I was able to step back from the source and focus on the meaning, I found that it’s all the same. One of my favourite things to do at my teacher training was listen to my teacher sing the Gayatri Mantra. And just to add some perspective of where I come from, I grew up in Saudi Arabia wearing an abaya and head scarf and had zero to no understanding of Hinduism. Knowing anything about Hinduism was considered anti-Islamic.

But then…I stumbled upon this beautiful prayer:

Oh God, the Protector, the basis of all life, Who is self-existent, Who is free from all pains and Whose contact frees the soul from all troubles, Who pervades the Universe and sustains all, the Creator and Energizer of the whole Universe, the Giver of happiness, Who is worthy of acceptance, the most excellent, Who is Pure and the Purifier of all, let us embrace that very God, so that He may direct our mental faculties in the right direction.

Isn’t this what everyone (who believes in God) wants? As a Muslim I ask this of Allah in my Namaz everyday. To guide me on the path that is right. I praise Him and confess I am nothing but his creation and need His guidance.

Read this also: How India bent it right with PM Modi and his ministers on Yoga Day.

Tell me then, how is this prayer different from anything we would want in our life? As a Muslim, I gained huge insight into my religious and spiritual beliefs through yoga. Yoga opened up a sea of deeper reflection I never thought I had access to.

Yoga allowed me to focus during my Namaz. With every breath I take as I bow down to God, I am focusing on my words as they flow out of my lips, completely aware that I am bowing before Him and am completely present. With no wandering thoughts.

No wandering thoughts? How is that possible.

Pranayama every morning taught me to stay grateful to my breath. Every inhale and exhale is a moment to be conscious of. Every waking moment requires you to stay present. That’s training the mind. And I learnt it through yoga.

I am now more aware during my Namaz. More present in my Dua. More grateful to the Creator for giving me a healthy body and mind. I’m also a better human being to people of other belief systems. All because I practice yoga.

So to sum this up: I am a practicing Muslim who teaches the Surya Namaskar as a means of physical and mental well-being and advocate the practice for deeper self-reflection and focus in religious meditative practices as well!

May all who are ignorant and malicious find knowledge and perspective.

One comment on “Yoga and Surya Namaskar can be practiced by anybody. Hinduism has no bar to adorn anyone.”