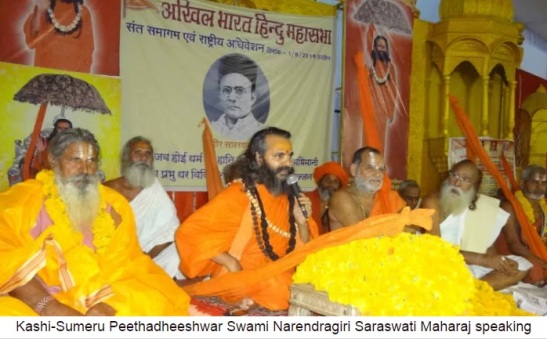 Announcement made during Saints Convention and National Conference on behalf of Akhil Bharatiya Hindu Mahasabha.

‘Mass recitation of Hanuman Chalisa will be started in all mosques on Fridays if Namaj is not stopped at Bhojshala. Ayodhya Shri Ramjanmabhoomi Temple will be completed by 2018′.

HJS Media | Ujjain Simhastha Kumbh | May 4, 2016:: ‘Bhojshala’ dedicated to Saraswati Mata at Dhar belongs to Hindus and instead of allowing them to perform ‘puja’ only on the day of ‘Vasant-Panchami’, Hindus should get right to perform ‘puja’ on all 365 days. The Government is insulting 80 crores Hindus by letting Muslims read ‘namaz’ at this place on every Friday. Henceforth, if ‘namaj-pathan’ at Bhojshala is not stopped, Hindus will read ‘Hanuman-Chaalisa’ on Fridays at every mosque in Madhya Pradesh, was the warning given by Kashi-Sumeru Peethadheeshwar Swami Narendragiri Saraswati Maharaj during Saints convention and national conference held at Simhastha Parva by Akhil BharatiyaHindu Mahasabha (ABHM). He also warned that Hindus would construct Shri Ramjanmabhoomi Mandir if Shriram temple not built in Ayodhya by 2018.

‘Saints convention and national conference’ was  organized by ABHM to discuss issues like giving due respect to Saints; establishment of undivided Hindustan; Bhojshala (Dhar) Mukti movement; rehabilitation of Kashmiri Hindus and protection of Gou-Ganga and Geeta (cow, River Ganga and Bhagavat Geeta), was attended by large number of Saints and Mahatmas from all over the country. There was acclamation of Hindu Rashtra during the conference concluded on May 1.

Unanimous decisions are taken for hike in salaries of MPs; then why no decision taken on ban on cow-slaughter ? – Shankaraharya Swami Vasudevanand Saraswati

Shankaracharya Swami Vasudevanand Saraswati Maharaj of ‘Jyotishmath’ said, “The Government says that it is difficult to take decisions of Hindus’ interests since it does not have majority in Upper House of Parliament; but unanimous decisions are taken for hike in MPs salaries; then why can’t decision be taken on imposing ban on cow-slaughter in the country ?

No Government but only Saints will bring Hindu Rashtra ! – Mahamandaleshwar Rambhushandasji Maharaj

Mahamandaleshwar Rambhushandasji Maharaj from Gujarat said that ‘sanskars’ would have to be protected for protecting Hindutva. If ‘sanskars’ are protected, ‘sanskruti’ will also be safe and then Hindu Rahstra would be established. The Government will not establish Hindu Rashtra. Only Saints will establish Hindu Rashtra. The Government is not working properly due to lack of ‘sanskars’. There are many Saints, Mahamadaleshwars, Shankaracharyas, Jagatguru; but what are they doing ? Adya Shankracharya created awareness towards Dharma and ‘sanskars’ by going door to door. How will Hindu Rashtra be established without undertaking such activities ? Everyone should start inculcating ‘sanskars’ in own house. ‘Sanskars’ should be preserved as was done earlier.

We will have to fight for Hindu Rashtra ! – Pujya Binduji Maharaj

‘Pujya’ Binduji Maharaj said that Hindu Rashtra would not be given on demand. Rights are given but have to be obtained by giving fight. So Hindus, get ready for war; it is not a job of cowardly people; there is need for brave warriors. As per the saying ‘Sanghe Shakti Kalauyuge’, we will have to unite. Today’s rulers are doing what Macaulay did earlier. Indian Constitution refers to Saints as ‘Bhikkhus’. Macaulay stopped our ‘Gurukul tradition’ and destroyed our ‘sanskars’. Same thing is being done by even our Government. Our pathetic condition is due to our drifting apart from Guru. We will have to surrender to Guru if we want Hindu Rashtra to be established. There is a woman called Trupti Desai in Maharashtra. She is staging agitations to enter temple sanctum and desecrating Dharma. We opposed her but she entered temple sanctum at Trimbakeshwar. There is a ploy hatched all over the country to destroy faiths and traditions followed in Dharma. Lack of ‘sanskars’ is the reason for such condition.

‘Pujya’ Dr. Charudatta Pingale, national Guide of Hindu Janajagruti Samiti said, “Sanatan Hindu Dharma is like a banyan tree. Presently, however, it is attacked from all sides in different forms such as cow-slaughter, love jihad, conversions, terrorists’ infiltration etc. Finding solution to individual problems has divided Hindus’ strength. We have to protect the whole tree and not just individual branches and for that, efforts will have to be made with unity for establishment of Hindu Rashtra. Dharma is expressed through behavior. Abiding by Dharma will protect Dharma. Separating from Dharma is the reason for today’s pathetic condition. If we want to save Dharma, we will have to first fight with own people who are Hindus only by birth but not by action.

Hindus won war not on strength of number but with divine help !

Most of the Saints and Mahants made appeal to increase population of Hindus for establishment of Hindu Rashtra. It was appealed that every Hindu should have ten children. On this ‘Pujya’ Dr. Charudatta Pingale said that Hindus have never won any war on the strength of number but have won wars with the help of their faith in God, God’s grace and divine help. Increasing population of Hindus may increase population of even secular Hindus; i.e. number of our enemies. Instead Hindus need to generate ‘Kshatra-Tej’ and ‘Brahma–Tej’ with the help of ‘sadhana’ like Bhagavan Parashuram. Such Hindus, even less in number, can establish Hindu Rashtra.