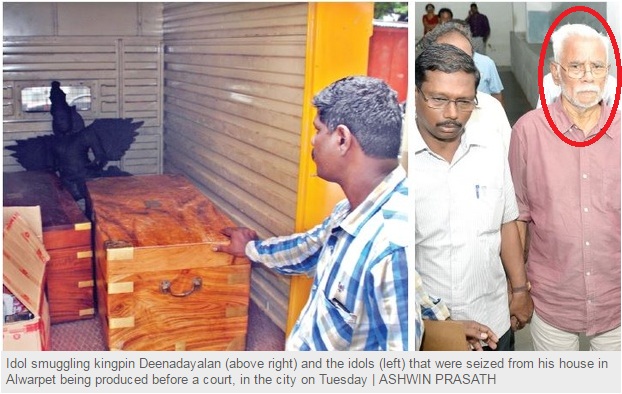 Upendran Bharathan | HENB | Chennai | June 23, 2016:: The Idol Wing of police have arrested the master kingpin Deenadayalan (84) on Tuesday in connection with the smuggling of  285 idols from unprotected Hindu temples across Tamil Nadu. But, it is not ascertained the reach of this racket beyond the state accessing Andhra, Telengana, Kerala and Odhisa.

Deenadayalan, the prime suspect of the recently busted idol and antique smuggling racket, had surrendered on June 3 after the police issued notice asking him to appear before them.

The police had earlier seized idols and paintings (some more than 2000 years old) of antique value from three places, including his house in Alwarpet.

The Idol Wing, attached to the Economic Offences Wing (EOW) which has been questioning him since June 3, arrested him formally on Tuesday. They have booked a case against him under the Antiquities and Art Treasures Act and various sections of the IPC.

The police produced him before the second Metropolitan Magistrate, who later remanded him in judicial custody.

The police had earlier arrested Maan Singh (55), Rajamani (60) and Kumar (60) in connection with the same case for helping Deenadayalan. Deenadayalan, who was running an art gallery in Teynampet since 1995 had smuggled idols to New York and Australia with the help of a dealer in Mumbai. 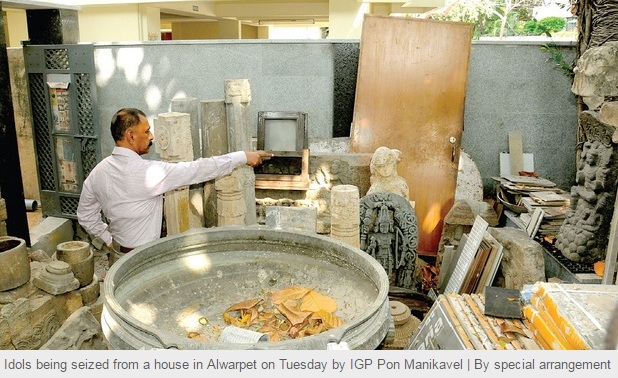 Earlier the Idol Wing of Tamil Nadu CID police had seized antiques worth over Rs 50 crore from the house of an absconding art dealer in Chennai. The seized items include dozens of Panchaloha and stone idols and paintings belonging to the Chola and Hoysala period.

The Idol Wing had busted the racket on May 31, arresting three persons — alleged agents who sold stolen items in Mumbai. The arrests followed a raid at the home of an art dealer in Alwarpet, leading to the seizure. Kingpin Deenadayalan (85), whose house on Chennai’s Murray’s Gate Road was raided over three days,  now arrested after rigorous grilling by police. His passport has been impounded, an officer said.

Officers said some 38 Panchaloha idols, 50 stone idols and 50 Tanjore paintings and wooden artefacts were recovered in the raids. Police had issued a lookout notice earlier against Deenadayalan.

Among the seized items are statues of Shiva in the form of Tripurantaka Murthy, Nardhana Ganapathi and Devi. Deenadayalan’s alleged role in smuggling an idol of Ardhanarishwarar from Virudhagereeswarar temple is also being probed.

The idol was sold for $3 million to Art Gallery of New South Wales in Australia in 2004 by Subash Kapoor, an idol smuggler who is behind bars now. Police is probing possible links between Deenadayalan and Kapoor, said an officer.

__With input from Express News Service.