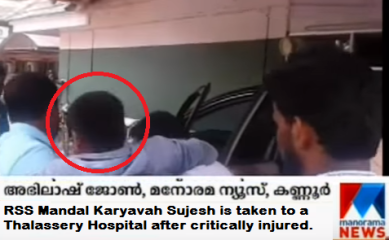 B Upendran | HENB | Kannur | Aug 26, 2016:: Four RSS activists were hacked and severely injured after CPM workers hurled bombs at them at Muzhakunnu panchayat in Kannur on Thursday evening out of a dispute from a Janmastami celebration. The police has confirmed the attack as  reportedly a continuation of clashes between CPM and RSS workers in the area over the Sri Krishna Jayanthi celebrations organized by both the outfits on Wednesday and Thursday.

Police said that a gang of 30 people, allegedly belonging to the CPM, threw crude bomb on them and hacked them with sharp weapons. They were at a site where the construction of a house was going on. They were rushed to the Thalassery Indira Gandhi Hospital for treatment.

Since Wednesday evening the situation in the area had been tense after BJP and CPM activists clashed after the Krishna Jayanthi shobhayatra.

To condemn the attack during the procession, the Hindu Aikya Vedi was observing a hartal in Muzhakunnu panchayat when the attack on the RSS activists took place. Police said the attack could have been carried out in retaliation.

The BJP alleged that the CPM workers attacked a few activists at the beginning of the procession at Muzhukunnu. Around 8 pm, they again attacked four RSS activists, Libin, Arun, Rajeesh and fourth ward member Umesh of Muzhukunnu panchayat, who suffered minor injuries in the attack allegedly carried out by CPM workers on Muzhukunnu road. They have been admitted to the Iritty Taluk hospital. 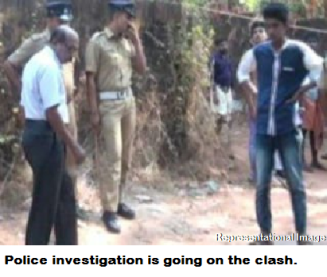 In retaliation, around 10 pm, CPM Pullingode branch secretary Suresh,46, was blocked and attacked by a group of RSS workers at Manimukku. They blocked his motorcycle before attacking him. He has been admitted to the ICU of a private hospital in Kannur. The police have arrested three RSS activists Mahesh,36, Bineesh,34, and Sajith,34, of Kakkayanghad in connection with the attack.

Police also arrested six other RSS activists, who manhandled two police officers of Muzhukunnu police station, ASI Rajan and driver Showkathali, when they tried to disperse the gang which came to attack Suresh.

Meanwhile, attacks were also reported in Pachapoyika, Purakulam. One CPM worker Jishnu,19, suffered serious stab injuries on his legs in an alleged attack by BJP activists, after they barged into his house at Purakalam near Koothuparamba, around 10.30 pm on Wednesday.

In another incident, four women including Bharthiya Janata Yuva Morcha (BJYM) district secretary Lasitha Palakkal and her six-year-old daughter Niya, Lasitha’s mother Leela (52) and her aunt Nalini (56) suffered minor injuries in the bomb attack, when the broken glasses from the window panes hit them. They are residents of Pachapoyika near Koothuparamba. The attack took place at 11 pm. All of them have been admitted to the Thalassery private hospital.

Earlier, the house of Lasitha Palakkal at Kathirur was allegedly attacked by CPM and she had shifted to her sister Lavanya’s house at Pachapoyika, recently.

While RSS linked BJP leader Sujith was brutally murdered by leftist goons in Papinisseri in February this year,  in the month of March a BJP activist A V Biju was hacked in front of his children in Kannur.  Another murder was done by the communist in Kerala in the month of July where a Hindutva Activist and BMS Functionary Sri CK Ramachandran was hacked to death in Kannur. Several incidents of Right and Left clash have been occurring in the God’s own State where CPM is trying to dethrone the Hindu Gods and Goddesses from the soil of Kerala to highly accommodate the Muslim and Christian God above the statute of Red Flag.

This entry was posted on August 28, 2016 by hinduexistence in Anti National, Anti-Hindu, Attack upon Hindus, Attack upon Hindus by Marxists, Communist Menace, Conspiracy against Hindus, CPM attack on Hindus in Kerala, Save Hindus in Kerala and tagged BJP activist hacked in front of children in Kannur, BMS worker Sri Ramachandran was hacked to death in Kannur, Four RSS activists hacked in Kannur by CPM, Hindu Aikya Vedi, Janmastami celebration, Lasitha Palakkal Bomb Attack, Sri Krishna Jayanthi celebrations, The war of Right and the Left in Kerala.