Jain Temple in Ujjain restricted girls in Jeans from entering inside. Leather goods not allowed. 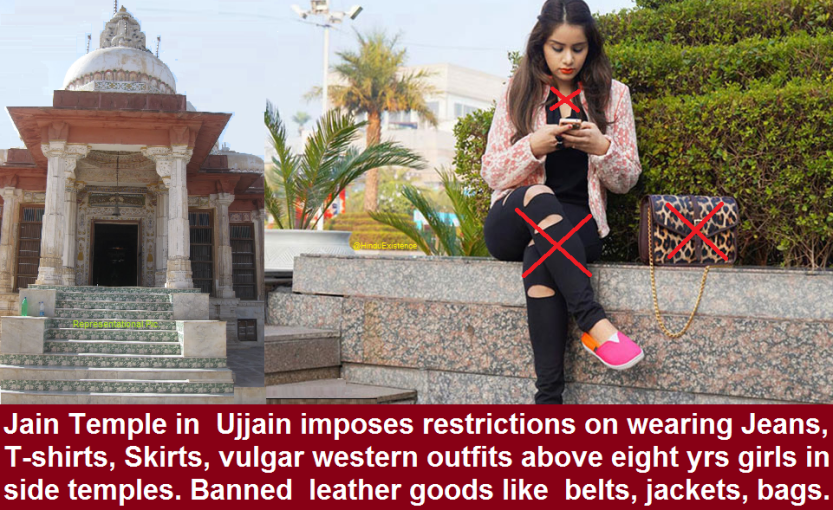 Temples are the places for devotion and meditation, not the ramps for fashion: Upananda Brahmachari.

Sumitra Agrahari | HENB | Ujjain | Sept 4, 2016:: Maximum of the devotees and visitors of Shwetambar Jain Samaj’s Rishabhdev Temple maintained by  Chhagniram Pedi Trust in Ujjain were found in a happy mood  on Sunday Darshan on 4th Sept with maintaining the Dharmik dress code declared by the Temple committee just a week before.

On August 28, Trust President Mahendra Sirolia told the press that  girls aged eight years and above should be asked not to wear western outfits like jeans, T-shirts, skirts and tops among others and should wear Indian dresses only. More over the temple committee contemplated a ban on leather goods like belts, jackets, handbags etc, inside the holy temple.

They were also provided with a ‘Chunri’ to cover their heads once they enter inside the temple, Sirolia said.

“The decision was taken as western outfits lower the prestige of the Jain temple. But there is no ban on anyone visiting the temple in proper dress,” he said, adding a notice was also displayed in the religious place on the issue requesting devotees to follow it.

The chairperson Lata Vankhere informed Free Press Journal that she came to know that the temple has barred entry of girls aged eight years and above wearing jeans, skirts and other western outfits.

She said, “The family members have to decide what their girls shall wear while going to temple, not others”.

She added that the during commission’s two-day sitting at Ujjain, she will personally visit the temple and to talk to the care takers about the instructions.”If it is needed the commission will serve notice on the Trust”, Vankhere added.

Hearing this intervention in temple matters by the MP State Women Commission, Upananda Brahmachari of Hindutva Raksha Sodh Peeth of Haridwar and the Editor of http://www.hinduexistence.org wrote to the Chairperson of Commission reminding her, “Temples  are  the  places  for  devotion  and  meditation, not  the  ramps  for fashion show“.

In his letter Brahmachari mentioned, “We  appreciate  your  visit  in  a  temple  and  want  to  remind you that the influence of the family upon their children is immense, but nobody should not  abandon  the  social  influence  and  implication  on  the  family  which  are  set  here  with  a greater importance. The members of earring families have been corrected  and  harmonized  by  our  society  and  various organisations. If  parents send their children to a temple with half-naked dress or unsuitable dress, obviously the society and organsitions must object and suggest the right way.

We must not forget Hindus, Jains, Sikhs and all other Sanatani roots make their temples and shrines with various spiritual, social and religious inputs. They spend lakhs and crores on it with their religious and devotional aspirations. Those temples can’t be made some boiling pots for some individual’s demands or so-called rights activists mostly ignorant about Dharma and its implications.

Who are very much worried about  the  position  and  dignity  of Hindu women in religious perspective as such they can recite and understand  one  point  of Hindu values like ‘Yatra Naryastu Pujyante, Ramante Tatra Devata’… means, Where Women are honored, Gods dwell there. The number of  Hindu  Goddesses  are  no  less  than Hindu Gods. We  take name of Goddesses before the names of Gods such as Lakshmi-Narayan, Uma-Maheshwar, Gouri-Shankar, Sita-Ram  and so on. So, they can rest in peace. And nothing to be worried.”

Any action or reply from the Madhya Pradesh State Women’s Commission is still awaited.

Interestingly, Madhya Pradesh is a BJP run state and its commissions etc are naturally influenced by the party obviously.