Brahmanbaria proves Facebook as a Jihadi tool in Bangladesh to destroy Hindus! Atul Brahmachari | HENB | Dhaka | Nov 7, 2016:: Nasirnagar Brahmanbaraia Conspiracy against Hindus exposed. The Anti-Islamic content was posted in the Facebook by a Muslim leader attached to Awamai League. Samay Samvad TV of Bangladesh revealed that the Hindu accused Rasaraj Das is an illiterate fisherman and he did not post any anti Islamic post. But, the Awami League leader named Faruk Mia and his cousin brother Kaptan Mia working in Alia Madrasa hatched the conspiracy to foment local Muslim people against Hindus of Harinber, Bardhanbari, Kashipur and Ghosh Para in Nasrir Nagar, Brahmanbaria in Bangladesh.

Minority Hindus were a gross victim at Nasirnagar on 30-31st Oct and 4th Nov consecutive Jehadi attacks there. Some 300 Hindu household, shops, families were assaulted, attacked and rampaged. 6 households and worship places torched. 15 temples were looted, desecrated and destroyed.

It is now exposed that Awami league leader Faruk Mia, the District Union President of Nasirnagar had some problem with the local Fishermen Union leader Rasaraj Das. As per Faruk’s estimation, Rasaraj did not helped Faruk at the time of last election of the Union bodies. Hence, Faruk opened an facebook account in the name of Rasaraj Das and obtained the password of it to hackle him afterwards by any means.

Ultimately,  Faruk posted a picture of Kaba juxtaposed with Hindu deity Lord Shiva with the help of his brother Kaptan Mia in the timeline of Rasaraj. Kaptan confessed all these to Samay Samvad TV on record. 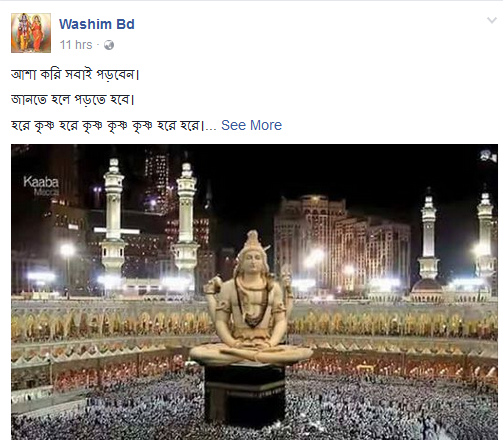 The Kaba posting generating attack on Hindus of Nasirnagar in Barhmanbaraia, Bangladesh. Actually one Muslim posted it, not any Hindu.

The alleged defamatory post including a photo of Lord Shiva sitting atop the Kaaba appeared on the Facebook timeline of Rasraj on Friday, 28th Oct. The ensuing violence against him and the Hindu community occurred in entire Nasirnagar area even though the youth had already apologised to Muslims on Saturday, saying that his account had been hacked.

It was later found that Rasraj’s Facebook profile was used by someone else, originally posted using the profile Washim Bd. Being informed by his friends,  Rasraj removed the post immediately with the help of his friend and wrote his apology, but to no avail.

Over the same issue, radical Muslims of Madhabpur in nearby Habiganj district attacked two temples following a protest rally on Sunday, 30th Oct. Another communal attack was launched on two other temples at Chhatak of Sunamganj on Monday, 31st Oct.

Again some fresh attacks were perpetrated on 4th Nov near Nasirnagar again.

Though the reporter Omar Faruq of Samay Samvad TV exposed the political conspiracy of an Awami League Union President to provoke fanatic Muslim outfits like Hefajat-e-Islam  and Ahale Sunnatwal Jamat for a personal revenge upon a Hindu and his community, the alleged Hindu offender Rasaraj Das is still in Police Custody.  In the meanwhile Bangladesh Police arrested more than 50 Muslim culprits who were engaged in Brahmanbaria Mayhem during Diwali festivity of Hindus.

Indian Govt also strongly reacted over the attacks on Hindus of Brahmanbaria and asked the BD Govt to ensure of the safety and security of BD minority people.

When the HENB team visited the damaged house of Rasraj in Nasirnagar on Saturday, it was found vacant as his parents and siblings had gone into hiding. The local associates of Rasraj also did not want to acknowledge him as a friend, fearing reprisals.

Some other Hindu families have already left the village. An elderly person of the Hindu community, wishing not to be named, told the HENB that at least five families had crossed the border into India in the last two days.

He said: “Many Hindu families have left their houses and are afraid of coming back to the village. I came here to observe the situation and will go back to my relative’s house in the night.”

As a matter of fact, Bangladesh saw dozen of virulent attacks on minorities with spreading rumors or posting objectionable elements against Islam.

In most of the cases, Muslim perpetrators took the advantage of popular social media platform facebook to generate fundamental sentiments to attack minorities in Bangladesh.

Facebook authority must look into this matter very seriously.

3 comments on “Brahmanbaria proves Facebook as a Jihadi tool in Bangladesh to destroy Hindus!”