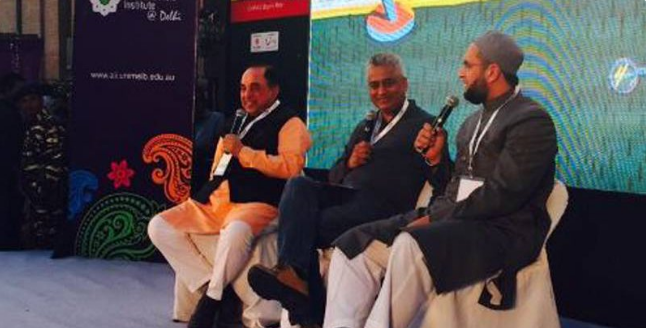 IT IS ON RECORD. BUT IF OWAISI FLOUTS, THEN IT’S A TAQIYYA.

Hindutvawadi Subramanian Swamy, Islamist Asaduddin Owaisi both say that they will abide by Supreme Court’s decision on Ayodhya Ram Mandir.

Shailaja Neelakantan | TNN | New Delhi | Nov 25, 2016:: Fierce opponents BJP MP Subramanian Swamy and AIMIM leader Asaduddin Owaisi said today they both will accept the decision of the Supreme Court on the disputed Babri Masjid-Ram Janmabhoomi site, no matter what that decision is.

And that’s not all they agreed on. They both were united in their distrust for finance minister Arun Jaitley. Owaisi openly talked about that while Swamy mostly alluded to it.

The two were debating at the Times Litfest in Delhi and TV journalist Rajdeep Sardesai moderating.

“I will accept anything the court decides,”Swamy said. “I am not advocating violence, I am advocating the decision of the law,”he added.

Owaisi too said the same thing.

If one were to score the debate, however, it would seem Owaisi scored higher, as he was more reasonable and backed his arguments a lot better than Swamy did.

Swamy cited the Directive Principles (DPs) of the Constitution to justify a ban on cow slaughter, and to justify the call for a Uniform Civil Code (UCC).

Owaisi reminded the audience that DPs were just that – ‘directives.’ And that Fundamental Rights were a lot higher in the hierarchy than DPs. Freedom of Religion, a Fundamental Right, therefore takes primacy over religion, Owaisi said.

Swamy, on his part, talked about Hindu civilisation always being accepting of other religions. He spoke of how India welcomed Jews, Christians and even Muslims way back in the day, in Kerala.

“The Jews were even allowed to build synagogues. This is the only country in the world where the Jews were not persecuted. Violent Islam disrupted this society,” Swamy said.

At this point, the moderator TV journalist Rajdeep Sardesai asked whether it was right to avenge in 2016 (or 1992 when the Babri Masjid was destroyed by Hindus) an act of violence that occurred in the four or five centuries ago. He also made a veiled accusation that Swamy is communal.

Swamy rejected the moderator’s accusation that he is communal, by talking about his pluralistic family.

“My credentials…see, my wife is Parsi, my son-in-law is Muslim, I have Jewish brothers-in-law and a Christian sister-in-law. None of them finds me communal,” Swamy quipped.

Still, he added that India is a Hindu majority country and that faith trumps law, so if people “believe Ram is born there” that should take primacy.

It is precisely this kind of “majoritarianism” that Owasi took issue with and said he has a problem with.

“Nehru also said that the greatest fear is majoritarianism. If you believe in plurality and diversity we have to ask that question,” Owaisi said.

Referring to the upcoming elections in Uttar Pradesh and four other states, Owaisi said issues like cow slaughter and the UCC “only come up when the BJP has to contest” elections.

At this point Owaisi also mentioned that a Wikileaks document showed that finance minister Jaitley once said “Hindutva is just for vote bank.”

To this, Swamy nodded emphatically and said about his party colleague, “Yes, yes, Wikileaks did show that.”

The two opponents chuckled conspiratorially and bonhomie was restored.

One comment on “Subramanian Swamy and Asaduddin Owaisi both agree to abide by Supreme Court’s decision on Ram Mandir Construction.”