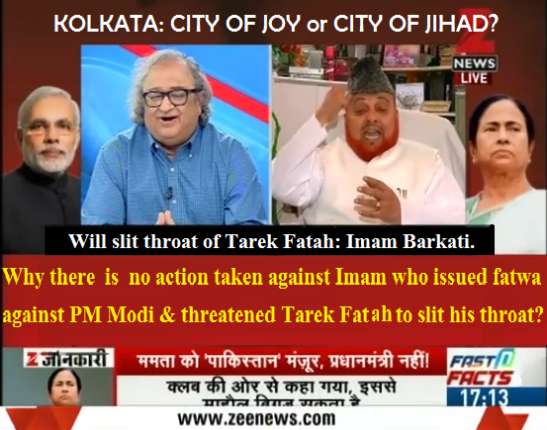 Save ‘The City of Joy’ from being a ‘City of Jihad’.

Anupam Gupta | HENB | Kolkata | Dec 10, 2014::  Just two days after issuing a ‘fatwa’ against Prime Minister Narendra Modi+, a fanatic Kolkata cleric on Monday threatened to ‘slit the throat of Pakistan-born author and political commentator Tarek Fatah’, with whom he appeared on a television program.

“Your throat will also be slit,” Syed Mohammad Nurur Rahman Barkati, the Shahi Imam of Kolkata’s Tipu Sultan Mosque, told Fatah while responding angrily to the latter’s statement that India has come a long way from the medieval practices when people’s throats were slit.

Both Barkati and Fatah were part of a discussion program on Zee news+ channel where the cleric viciously attacked Prime Minister Narendra Modi, accusing him of spreading communalism and ruining the life of common people through the demonetization move.

He verbally attacked Fatah, who opposed the cleric’s decision of issuing ‘fatwa’ against the prime minister and offered a cash prize.

After the show, Fatah demanded the Muslim cleric’s arrest by the Kolkata Police for threatening him.

Canadian citizen Fatah is now in India with proper visa and joining many forum to keep his views on Jihad and Islamic future in this globe.

“Kolkata Mullah threatens me on live TV. Will Kolkata Police arrest him?” he said in Twitter.

Many panelists in the said TV discussion accused the WB Govt for its inaction to arrest Barkati and pointed on the unabated appeasement of Muslims and nurturing Muslim vote bank politics as the sole cause for the growth of Jihadi elements in the state.

Barkati on Saturday issued a ‘fatwa’ against the prime minister, accusing him of ‘bluffing’ people through demonetization, evoking a sharp reaction from the Bharatiya Janata Party (BJP), which demanded his arrest. He also announced a cash prize of Rs 25 lakh to whoever executes the ‘fatwa’.

Barkati actually issued his Talibani Fatwa from Calcutta Press Club declaring an award of Rs. 25 Lakh for cutting the beard of Narendra Modi including shaving his head and blackened his face.

The notorious Imam Barkati was involved earlier with defaming Calcutta High Court order against use of Mosque loud speakers above 65 dbl and on prohibition of cow slaughter, execution fatwa against renowned writer Taslima Nasrin and Namaj e Janaja in Kolkata for the death of Osama Bin Laden. This Imam also issued a ‘stone pelting’ fatwa last month against WB State BJP president Dilip Ghosh over an ‘offensive’ remarks made by him against WB CM.

Barkati is actually trying to turn the ‘City of Joy’ as a ‘City of Jihad’ with a gross Jihadi propaganda.

The West Bengal unit of the BJP lodged a police complaint against the cleric on Sunday, demanding his immediate arrest.

3 comments on “Talibani Imam of Kolkata threatened Tarek Fatah to slit his throat.”