In reply of Govt restrictions, RSS must call a 5 Lakh Hindu gathering in Kolkata within six months. 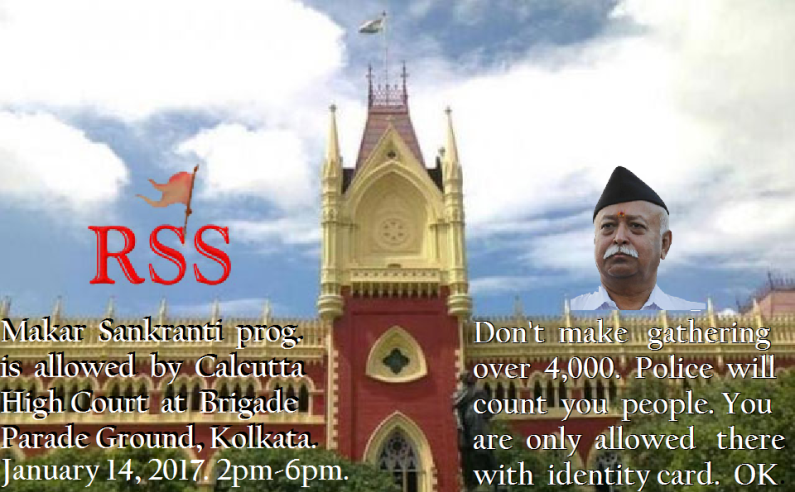 Humiliated and surrendered RSS, Kolkata will be assembled in Brigade Parade Ground with a ridiculous figure of 4000.

Upendra Bharti | HENB | Kolkata | Jan 13, 2017::  The Hon’ble Calcutta High Court today issued suo motu contempt notice against the Commissioner of Kolkata Police, expressing displeasure at him for not complying with its order with regard to the application of RSS for permission to hold a programme of Makar Sankranti in the city of Kolkata without any proper justification.

Kolkata Police was disallowing the prog of RSS with a reason of crowd, traffic and other related matter during the Gangasagar mela pilgrimage  and its halt camps near Babughat and Howrah. Antecedents hint that Kolkata police had a pressure from Nabanna and a ‘Modi Hatao’ lady ruling this state with an utmost anti-Hindu attitude.

While Justice Joymalyo Bagchi directed commissioner Rajeev Kumar to explain his conduct with regard to the contempt proceedings within two weeks, the humiliated and surrendered members of RSS, Kolkata Mahanagar unit will be assembled in Brigade Parade Ground with a ridiculous figure of 4000.

Brigade Parade Ground is one of the largest grounds in the country which has a capacity of 6,00,000 people as believed.

Justice Bagchi had on January 11 directed the Commissioner of Police (CP) to consider the application of RSS for permission to hold a function at Bhukailash Park or at Brigade Parade Ground within 24 hours and communicate the decision to the organisers.

The decision not to allow the programme, scheduled to be held on January 14, was, however, communicated by a joint commissioner of police.

Expressing his displeasure, Justice Bagchi said that the rules of business of state do not override or abrogate the court’s order.

Observing that the act was an example of bureaucratic insolence, Justice Bagchi said that the CP was fully aware of the order passed by the court, but had failed to carry it out.

Holding that it was a wilful and deliberate act, Justice Bagchi suo motu issued contempt notice against the commissioner.

On the other hand, specifying the restrictions, Justice Bagchi directed that the organising secretary, Kolkata Mahanagar unit of RSS, which is holding the programme where drills and other activities would be held with the participation of RSS Chief Mohan Bhagwat, would have to give an affidavit before the court that no person without proper registration and identity card be allowed to attend the programme.

The organisers would have to give an undertaking to the court as also the Kolkata police authorities to bear the cost of any unruly behaviour by any person related to the programme.

Specifying the restrictions, Justice Bagchi directed that the organising secretary, the Kolkata Mahanagar unit of RSS, would have to give an affidavit before the court that no person without proper registration and identity card be allowed to attend the programme.

Justice Joymalyo Bagchi said the programme scheduled to be held from 2 PM to 6 PM can be held at Brigade Parade Ground in the heart of the city subject to some restrictions including a cap of 4,000 on the number of attendees.

The Kolkata Mahanagar unit is holding the programme, where drills and other activities would be held with the participation of Mr. Bhagwat.

The court also said the police might remove any person who was not an invitee and would also have to ensure adequate deployment of force to ensure maintenance of law and order.

With conveying full respect to the designated Court of Law, this point cannot be ignored that the Hon’ble Calcutta High Court has humiliated the Hindus of Bengal by putting such a restrictions within 4000 gathering with keeping identity cards as RSS is a bigger terrorist force than the Maoists or fundamental Muslims who attacked American Center in after an rally in Esplanade.

Maoists and Islamic fundamentalists are allowed to assemble in Kolkata with their radical, fundamental  and anti-national agenda; but nationalist RSS is being restricted in a very shameful way and Hindus in Bengal are humiliated in fact through and arbitrary and extra-judicial encroachment upon the rights of majority law abiding people in the state for their right to assemble. Now, majority Hindus in Bengal are bearing an agony of victimization by the administrative, political and judicial vendetta very unfortunately.

Justice Bagchi may please take a note that there was no power in Bengal, is not and will not be anyone or authority to restrict Muslim people or any political party within 4000 and stapling them with identity card in any such gathering in Kolkata. I challange.

Yes, it can only happen to the unorganised Hindus in Bengal and obviously for the timid and compromising leadership like RSS.

It is seen that RSS South Bengal chief Bidyut Mukherjee had Wednesday told The Indian Express: “We have been functioning in Kolkata since 1939 but never have we faced such a hostile administration”; and Jishnu Basu, RSS secretary (South Bengal), told Hindustan Times: “Justice has prevailed. Calcutta high court ensured that Hindus can live in West Bengal and speak. We welcome the verdict”. But how? With such restrictions? What is the status of Hindus in Bengal under their leadership?

These over-satiated Bengal RSS perhaps unable to think a greater Hindu might and right in Bengal! Their inabilities are  exhorting the Hindus to tolerate Dhulagarh and to bow down to restriction, indignity and humiliation.

It would have been better to observe this Makar Sankranti function crushing down the injustice and restrainment of Kolkata police, even going to jails in thousands. Have RSS Bengal rejected that revolutionary spirit of Dr Hedgewar?

RSS must call a 5,00,000 Hindu gathering in Kolkata within six months. Every Hindu organisations here are ready to join them. That will be turning point of ‘Hindu Bengal for all’ instead of a ‘communal Jihadi Banglastan’.