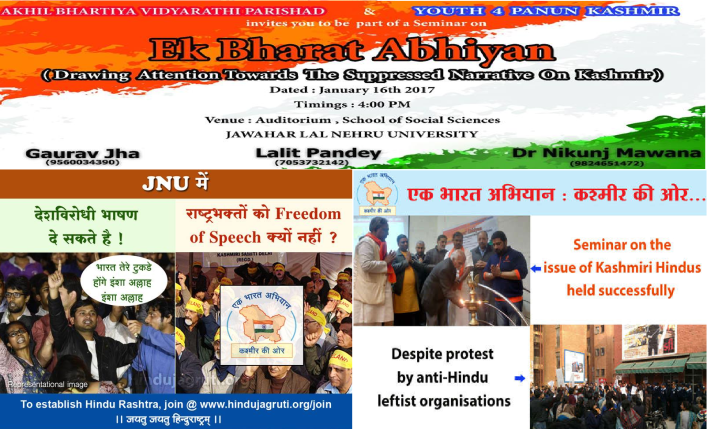 The event, organised by Akhil Bharatiya Vidyarthi Parishad(ABVP) and Youth 4 Panun Kashmir at the School of Social Sciences, saw several students raising slogans and opposing the presence of “communal elements” like Tapan Ghosh of Hindu Samhita and Abhay Vartak, spokesperson of the Sanathan Sanstha, the organisation alleged to be behind the murders of rationalists Govind Pansare and Narendra Dabholkar.

“It is ironic that these people — and especially murder accused Sanathan Sanstha — are called here to speak on unifying the society when they themselves are the most divisive of people,” said Mohit Pandey, president of the JNU Student’s Union (JNUSU).

Questioning the administration over the permission given for the event, Pandey said that “often the administration sends notices inquiring about even minor programmes that take place on the campus, but there is no inquiry over the presence of hate-mongers and criminals.”

Meanwhile, president of the ABVP unit Lalit Pandey countered the protesters saying that “those protesting against this event often talk about Palestinian and Syrian refugees, but are silent about the plight of Kashmiri Pandits.”

Abhay Vartak, spokesperson of the Sanstha said that he considers February 9 as the ‘Black Day’ of the country. He said, “To counter the supporters of terrorists in the country, we have come here almost after a year to show our strength.”

One comment on “JNU Kashmiri Hindu event held at SSC successfully despite protest by leftists & Islamists.”