Congress has turned like Muslim League, BJP must not another version of Congress!

Congress has become the ‘Indian version of Muslim League’, says VHP. Now, BJP should not take the position of Congress. 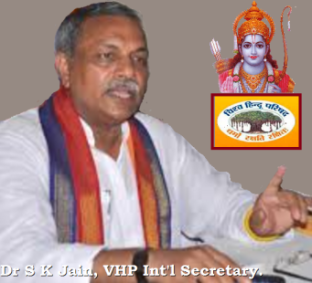 Upendra Bharti | HENB | New Delhi | March 2, 2017::  Buoyed by the BJP’s impressive show in Maharashtra civic polls, VHP said Congress has become an ‘Indian version of Muslim League’ and warned that parties which do not follow Hindutva line will get “finished”.

Interacting with media persons here recently, Vishwa Hindu Parishad (VHP) joint general secretary Dr Surendra Jain stressed that construction of Ram temple remains a “core issue” for the BJP and will be resolved by 2019. “These so-called secular parties raised questions over army’s surgical strike, raised question over institutions of RBI and EC. But people have (by reposing faith in BJP in the polls) shown that those who are Hindutvavadi are nationalist,” Jain told reporters.

No doubt, Congress has been shaped as anti-Hindu party like Muslim League. But, Hindutva people of Bharat hardly want to see BJP to take a shape of pseudo-secular Congress anyway.

Reluctance of BJP for making Ram Temple in Ayodhya, delaying the bill to prohibit cow slaughter, lingering the process to repeal Art. 370,  banning religious conversion or hesitating for a common civil code, obviously branding BJP as a new version of Congress.

Various charges of corruption and lavish life of BJP leaders contrary of Sangh ideology are frustrating the common people which have been somehow suppressed under the shadow of surgical strike and demonetization.

BJP must not forget its core Hindutva issues anyway in the trail of politics of development.

“I think Congress is playing Muslim League’s role now. They are donning that role of the League by making uncalled for allegations against a nationalist party favoured by people as it is seen in the polls. BJP is numero uno in Maharashtra,” Dr Jain said.

While the BJP has become number one party in Maharashtra, the Shiv Sena, which fought the elections against it, is positioned second, he added.

“A Hindutvavadi party is number one in Maharashtra. Which is the second party there now? One which claims to be Hindutvavadi, Congress and NCP are decimated. This shows parties championing Hindutva will only survive, others will get finished or isolated,” he said.

Noting that the BJP ‘should get majority in poll-bound Uttar Pradesh’, Jain said Ram temple is the party’s core issue and will be resolved by 2019.

“I think Congress is playing Muslim League’s role now. They are donning that role of the League by making uncalled for allegations against a nationalist party favoured by people as it is seen in the polls. BJP is numero uno in Maharashtra,” –said  Surendra Jain, VHP Joint General Secretary.