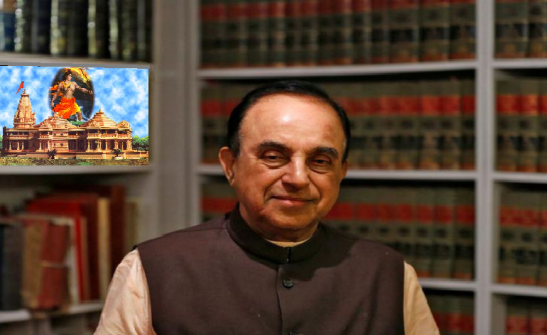 PTI | New Delhi | May 15, 2017:: BJP MP Subramanian Swamy said today that the Centre might introduce a bill in Parliament for building a Ram temple at the disputed site in Ayodhya only after securing majority in the Rajya Sabha next year.

“If the Congress can bring a bill to overturn the Supreme Court verdict in the famous Shah Bano case, this government can also bring a bill to build the Ram temple in Ayodhya,” Swamy said at the India TV Samvaad conclave.

He was referring to a maintenance lawsuit filed by Shah Bano in the Supreme Court, which had granted her the right to alimony from her husband.

Hoping for a favourable verdict from the Supreme Court on the Ayodhya dispute in December this year, Swamy said he would request the court to start day-to-day hearing, according to a statement.

During the debate, AIMIM chief Asaduddin Owaisi ruled out mediation to solve the Ayodhya dispute. “It is clearly a title suit, and there is no question of mediation. Let the Supreme Court give its verdict. We will accept (it),” he said.