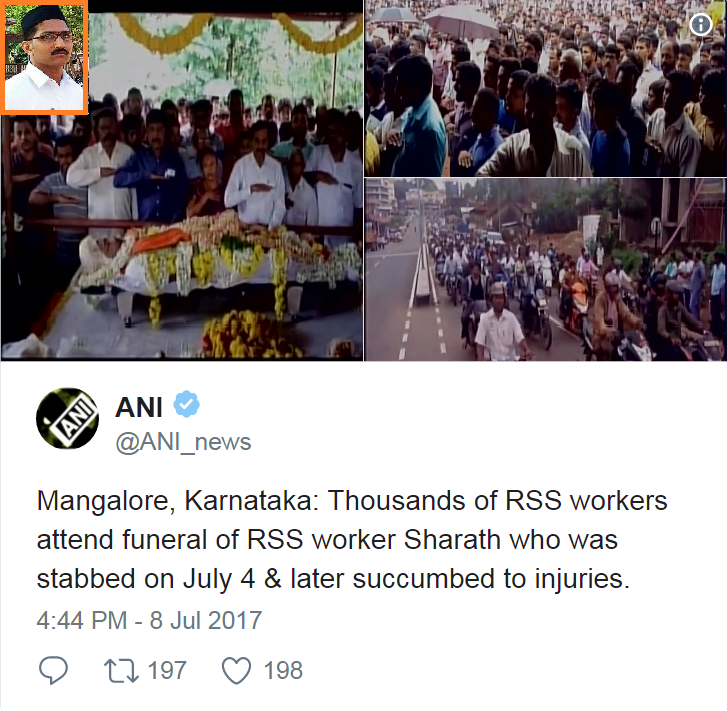 B Upendran | HENB | Mangaluru | July 8, 2017:: An active RSS volunteer, who was allegedly stabbed by an unidentifed Jihadi group at Bantwal in Dakshina Kannada district, succumbed to his injuries at a private hospital in Mangaluru, prompting police to tighten security in the region.

The brutal attack on RSS activist at BC Road on Tuesday night was in retaliation to SDPI (an Islamist group registered as a political party) worker Mohammed Ashraf Kalaai’s murder, which took place two weeks ago in broad daylight at Benjanapadavu, say police sources+.

Sarath Madivala, 28, a resident of Kandur near Bantwal, was battling for life for three days at the hospital after the attack on July 4. He died on Friday evening, hospital sources said.

Huge numbers of RSS leaders and workers thronged at the hospital on hearing the news of the death of the RSS volunteer+.

Tensions ran high in Dakshin Kannada’s Bantwal as the funeral procession of slain RSS worker Sharath Madivala, was taken out from AJ Hospital in Mangaluru to Sharath’s hometown of Kandur in Sahipamunnur.

Hundreds of people, including activists of various pro-Hindu organisations took part in the funeral procession with black flags tied to their two-wheelers

A minor flashpoint emerged when the procession passed through BC Road in Bantwal, and verbal clashes between Hindus and Muslims escalated into stone-pelting by Muslim groups on funeral procession+.

“The Muslim miscreants were hiding behind Sultan Complex and the building next to it. As soon as the funeral procession passed by the complex, they began pelting stones on funeral procession. One man was hit by a large stone on his head and sustained moderate injuries,” said Dakshina Kannada SP, Sudheer Kumar Reddy.

After the attack on Madivala and his funeral procession, protests broke out in Mangaluru city following which prohibitory orders against large gatherings were issued in the area. BJP leaders took part in the protests on Friday demanding immediate arrest of the guilty. Arrests were made for violation of these orders. The orders under Section 144 have been extended in the whole Dakshina Kannada district till Tuesday on July 11. The situation of Mangaluru and Dakshina Kannada is tensed+.

RSS spokesperson Rajesh Parmar said Sharath’s murder was the 12th such killing in Karnataka in the last four years.(Actually, this RSS spokesperson, most probably,  is not well conversant of the facts.  Hindu Existence archive says that 12 RSS-BJP-VHP activists have been murdered in Jihadi network of Karnataka upto the Murder of Srinivas Prasad+, popularly known as Kithaganahalli Vasu on March 14, 2017. Srinivas Prasad’s murder can’t be excluded from this list as it has not yet been proved that there was no hand on any Jihadi network for Prasad’s murder. Sarath Madivala is the 13th victim of Jihadi killing row in Karnataka in just last three years.- Ed. Hindu Existence).

“This increasing number of murders in Karnataka and other southern states is shocking and we want the Karnataka Government to take a strict and immediate action so that the culprit is punished, law and order is maintained and a peaceful environment is provided for the social activists in Karnataka,” he said.

Reminiscing the murder of another RSS worker Rudresh in Bengaluru earlier, Parmar said the probe by the National Investigation Agency (NIA) revealed many things.

“Even in the case of Rudresh in Bengaluru, we demanded an NIA probe. They revealed that there are so many networks related to the killings of so many RSS workers in Karnataka as well as other southern states of India.

The RSS had demanded impartial probe into the killing+.

__Agencies. Courtesy: ANI and the links used above.

One comment on “Karnataka : RSS activist Sharath, stabbed by Jihadists in Bantwal, succumbs to injuries.”