There is no Nationalism in Islam, No question to sing National Anthem or Song: Salafi leader. 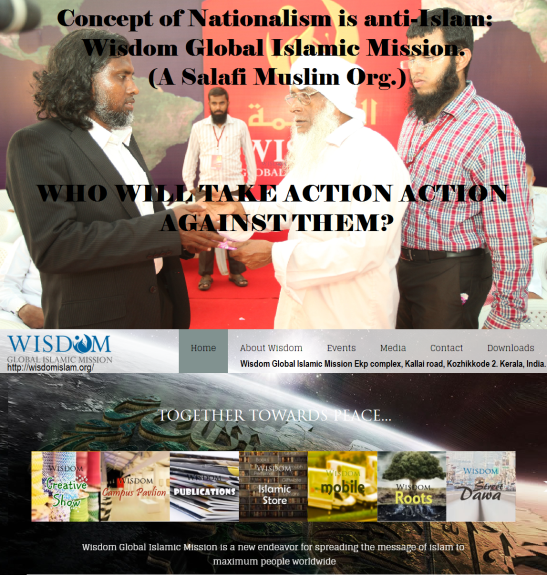 In day alternative, Muslim organisations in India are challenging, ‘Nationalism’, ‘National Anthem’, ‘National Song’, ‘National Heroes’ and so on…. but Who will check them and how?

B Upendran | HENB | Kozhikode | Aug 21, 2017:: “There is no Nationalism in Islam. Muslims believe in Islamic Ummah, the Islamic brotherhood. So, they need not any concept of crippled nationalism in fact. The true Islamic people in India must not franchise any bogus concept of nationalism”, says a controversial leaflet published by a fringe salafai group in Kozhikode, which creates a row these days in Kerala and national level too.

The Salafi group has come up with its controversial position that the concept of nationalism is against Islam and that it is wrong to say all Indians are one from the Islamic perspective.

Rebutting the arguments in the pamphlet ‘One India, One People” brought out by the rival Salafi organization Wisdom Global Islamic Mission+, Abdul Muhsin Aydeed, a Salafi preacher based in the city, wrote that the call to love people cutting across religious consideration is alien to Islam. The four-part article, written before the attack on Wisdom volunteers in Vadakkekkara in Eranakulam on Sunday, is available on http://alaswala.com+.

Aydeed said that nationality was not a binding force for Muslims. “In the eyes of Islam what distinguishes people is the religion itself- those who believe in Islam and those who dont,” he said, adding that Islam is against even Arab nationalism.

Quoting the Saudi Salafi scholar Sheikh Abdul Aziz Ibn Baz, he said nationalism acts as dividing force for Muslims. He said that this is not limited to Indian nationalism but is applicable to all manifestations of nationalism. “For a Muslim what is of paramount importance is his religion, his country comes only next,” he said. Aydeed argues that it is imperative for a Muslim to love a Muslim country even if he is not a citizen of the country. He should wish victory and virtue for the country because “it is part of love for Islam.”

He chose to disagree the comparison of India to a garden in the pamphlet published by Wisdom group. Garden is a place where one sees only beautiful flowers and plants, but there are many unwelcome things in India. “Animals, stones and human organs that cannot be named publicly are worshiped as gods India. How can such a place be called a garden?” he asked.

Aydeed also finds the reference to ‘rich cultural diversity’ in India disgusting. “The cultural diversity in India is a comedy for many,” he said, adding that there are naked ‘people’s leaders’ who addresses Parliament on the one side and there are ‘freakens’ on the other. Aydeed asked the author of the pamphlet to clarify whether countries like Saudi Arabia are ‘poor’ because it doesn’t give freedom for public worship to other religions.

He clarified that criticizing plurality in religion doesn’t mean that people of other faith should be killed or their religious signs be eradicated. “What Allah would like to see is not the proliferation of religions, but people accepting Islam. Therefore Muslims are not duty-bound to praise people embracing different religions,” Aydeed said.

On Monday, Kakkanad magistrate Court remanded 40 Salafi people who were arrested for allegedly distributing ‘ant-Nationalism’ pamphlets in the houses of Vadakkekara areas. All of them were sent to 14 days Judicial custody. Police also arrested 7 Hindu Aikya Vedi workers for manhandling the Slafi workers as reported. Extra police deployment has been made in the area to avert any further communal clash in the disturbed area.

Earlier, many Salafi groups in Kerala challenged any Govt. initiative for mandatory singing of national Anthem or National song in any situation.

Though many Islamic organisations took part in the Indian Independence Day celebration of Aug 15 and sang National Anthem, the Salafi groups in Kerala boycotted such functions related to ‘Nationalism’.

2 comments on “There is no Nationalism in Islam, No question to sing National Anthem or Song: Salafi leader.”