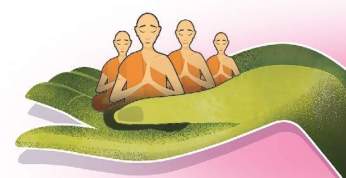 ENS |  Chennai | Oct 10, 2017:: Over 80 persons, including children embraced Buddhism during the Buddhists Renaissance Conference at Guduvanchery here on Sunday.  The event was attended by hundreds of Buddhism followers. Monk Vinaya Rakkhita Bhante from Bengaluru headed the ceremony.

Almost all people cited caste and gender discrimination in Hinduism as the reason for embracing Buddhism, a religion, they feel, treats all equal. “Buddhism teaches equality and also how to respect fellow human being. I have faced discrimination indirectly during my college days also.

We are historically Buddhists, so I call it as reversion,” said S Suganes, working as an assistant professor in a government medical college. He was referring to a widely held belief that most of the Dalits were originally Buddhists, before Hinduism again emerged as the majority religion in the country.

“Buddhism is in my roots, so I’m going back to it,” said D Manimegalai, a 24-year-old graduate, who was one of those who converted to Buddhism.

The conference was organised by Mass Movement for Transformation (MMT), an association for Buddhists. The association also passed resolutions that Buddha Dhamma classes should be organised in all districts.

Non-brahmin archakas yet to make it to Sanctum Sanctorum of Hindu Temples.

T Muruganantham  |  ENS | Chennai |   Oct 10, 2017:: After the Kerala government’s decision to appoint non-Brahmins as temple priests, Tamil Nadu, a State where the idea was propagated strongly as part of Dravidian politics, is seeing renewed calls from political party leaders for a change.But despite policy decisions being taken, no non-Brahmin  has so far been allowed inside the sanctum sanctorum of government-administered temples.

It was the DMK regimes headed by M Karunanidhi that took two major steps in this regard: first in 1970, the government abolished the practice of hereditary succession of priests, and then in 2006, it amended the Hindu Religious and Charitable Endowments (HR & CE) Act to pave way for appointment of non-Brahmins as archakas, and ordered training for them.

As many as 207 men were trained in 2007; but a decade since, not one have been employed in any of the HR & CE temples due to the allegedly ambiguous verdict by the Supreme Court in 2015.

Many, like 29-year-old R Arun from Sivaganga, are working in small temples in villages after failing to get a job despite sending several petitions. “There were 35 of us who trained at Madurai Meenakshi Amman temple,” said Arun, who belongs to most backward caste (MBC) Agamudaiyar community, and works as a priest at a Mariamman temple in Athur near Salem.

They earn a little extra by doing poojas at devotees’ homes, but a government job is still a distant dream. “I am not earning enough to meet my expenditures. Due to family pressure, I am working in a private company in Chennai,” says N Thirumurugan (32) from Natrampalli in Vellore district. A member of the Kulalar community (MBC), he was trained at the Parthasarathy temple in Triplicane, Chennai.

Many of them accept offers to conduct poojas and rituals, including Graha Pravesam and marriages, at the households of their community members. “There is no problem for me as a priest. In our areas, there are backward community families who accept me as priest,” said G Balaguru (32), from Nathankinaru in Tirunelveli, hailing from Parayar community (Scheduled Caste).

Sabarinathan, a 29-year-old hailing from the Vettuvagoundar community (MBC), said he had attended some interviews in government temples, including Bannari Mariamman temple, where his application was rejected quoting temple customs. He now works as a priest at a Vinayaka temple in Maravapalayam in Karur that is not under the HR and CE Department.

According to activists, the pause in this move was due to the ambiguity in Supreme Court verdict. Though the verdict upheld the State government’s right to appoint members of all castes as priests, another part of the verdict thwarted the objective by stating, “appointment of archakas in temples following Agama rituals of individual temples concerned would continue”.

“Since that verdict in 2015, there have been no signs of appointment of any non-Brahmin archakas in the government temples although the verdict empowered it to appoint qualified persons from other communities as archakas,” said S Senthilnathan, counsel for the non-Brahmin archakas trained by the State government.If one were to go strictly by the norms, there is hardly any temple in Tamil Nadu following Agamas strictly. Though there are 26 Agamas in Hindu tradition, only a  few — Karana Agamam, Kamiya Agamam and Bahula Agamam in Saivite temples and Pacharathra Agamam and Vaikanasa Agamam in Vaishnavite temples — are in practice. “So, the argument that appointing archakas according to the agamas is meaningless in today’s context,” he contended.

In August, Sabarinathan, one of the trained archakas, filed a writ before the High Court seeking direction to evolve a scheme to appoint them. “As per the report of Justice AK Rajan Committee in 2006, there is no mention about caste either in Vedas or Agamas saying that only persons of a particular caste could perform poojas. There is absolutely no authority that says  persons belonging to a particular caste alone are eligible to perform poojas in Saivite, Vaishavite or Amman temples,” he said.

Hindus must not be divided on Caste bias, but to be united upon Varna Character.

Upananda Brahmachari | HENB | Haridwar | Oct 10, 2017:: The misinterpreted and misconceived birth-based caste system in Hindu Dharma has done many menace in our Virat Hindu Samaj. Unfortunately,  from the ancient Vedic call of “Amritasya Putra” to the modern sensitization of VHP as “Na Hindu Patito Bhavet”,  we are still unable to eradicate the caste bias from our society.

Picking out the loose threads in our mismatches of our scriptural manuscripts, the anti-Hindu masterminds find the new windows to attack us in many ways.

As Southern India has been tormented by the political perpetration in the name Aryan and Dravidian conflicts, it is east to do the maximum harm to Hindus there by inciting the caste feeling there. So, the Anti-Hindu hooligans are very active there to convert Hindus with a concocted canard of caste conflict in Hindu Dharma. So, it is very much high concern of us when Hindus are being converted in Buddhism in the name of equality, but Buddhist are conflicted in Chinese and Tibetan lobby or divided in Hinayana and Mahayana or Buddha Sasana in Sri Lanka killed the Hindu Tamils there!

Similarly, the internal discord of us in the conflicts of Brahmin and Non-brahmin archakas in our Hindu Temples in South or anywhere are not the sign of Hindu advancement or Hindu Empowerment anyway. We must acknowledge everybody through his/her inner quality, ability, knowledge and wisdom; and never by his birth in any particular caste.

According to our Hindu scriptures, we believed in Varna Vyavastha, not in Caste System. The Varna or the Characteristic identity is based upon Guna and Karma i.e. manifesting attribute and the work nature. It is changeable and tangent parameter to frame the society on  the basis of division of work as well as ensuring one’s merit, intention and creativity. It is always based upon Sanaskara, the revolution of Human evolution in the both the field of material and spiritual world. But, it has never been declared as birth right property of anybody.

As Almighty created the four Varnas as Brahmin, Khastriya, Vaishya and Shudra (Chatur Varnyam Maya Shrishtam/ Guna  Karma Vibhagasah), how can we reject anybody or admire more from these four? They are all useful in our society and can do best for the Rashtra (Nation) with making coordination and avoiding conflicts.

Most interestingly, in the present day complex situation, we may render or have to render more responsibilities maintaining the multi-denominational role of the Brahmin (the sector of educational, worship and mentor groups), Khastriya (the defense and warrior sectors), Vaishya (the business, finance and agri sectors) and Shudra (the labour, industries and service sectors) as per choice and need. Nobody can restrict us if we want to sacrifice our best in our chosen sectors in accordance to our ability, mobility and nobility.

We have seen many Shudra Rishis in Vedas, interchange of Varnas according to their proficient nature or subjugation of Varna in any demanding situation. Then how can we remain static in the fragrant flow of life and joy in Hindu Dharma.

Hindu Dharma gives us the liberty from all bondage abiding by all social system based upon material and spiritual synchronization. Maintaining the Varna system, Hindus will reach its ultimate goal of supreme salvation through the magnum manifestation of divinity already in man.

It is ensured for all without discrimination any caste and creed, if maintained the Dharma, the righteousness. If we maintain Dharma rightly, such petty quadrilles of  caste etc. can’t survive anyway.

Mahabharata says, “Dharma eva hato hanti / Dharmo rakshati rakshitah” …One who destroys Dharma is destroyed by Dharma / One who protects Dharma is protected by Dharma. This is not meant for only Brahmins. It is equally trur for the rests of Khastriya, Vaishya and Shudra.

Please do feel the oneness of the Hindu Society and greatness for all Hindus. This is the right way for the Spiritual Renascence of the Hindus for making a Constitutional, Cultural and Spiritual Hindu Rashtra in Bharat within 2025.

Hindu Existence Forum is to appeal RSS, VHP, Hindu Mahasabha, Hindu Janajagruti Samiti and all Hindu Frontal organisations to uproot the weeds of Casteism from the domains  of Hindus.