The Circular where Saraswati Puja was denied. 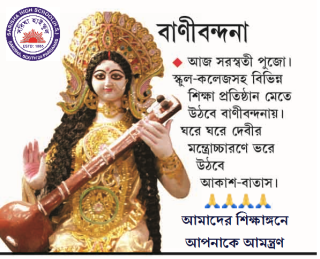 Saraswati Puja – A Big Festival in Bengal Schools and Colleges.

Susmita Bhattacharia | HENB | Raiganj | Jan 11, 2018:: Two negatives make a Positive. But, have you ever heard that two Positives make a negative? But, here is the truth. Two Positive Jihadis made a negative thing in the holiday list  of Uttar Dinajpur Primary schools under the District Primary School Council (DPSC).

Two prospective and positive Jihadis in Uttar Dinajpur District Primary School Council viz Mohammad Jahid Alam Arju being the Chairman of DPSC and the District Inspector of Schools and Ex-Officio Secretary, Aminul Ahasan jointly signed a circular of holidays in the district for January of 2018 and curtailed the holiday of Saraswati Puja this year vide Letter No. 24 dated 10.01.2018.

Goddess Saraswati is believed as the deity of learning and the worship of Goddess Saraswati in Basant Panchami in schools and educational institutions is a big festival among the students of throughout India, specially in Bengal. Consequently, the curtailment of Saraswati Puja by two Muslim officials in the education department created a big resentment among the students of North Dinajpur and their guardians.

The resentment of the Hindu students and public turned as a huge protest in the social media in no time and it was highlighted that the minority Hindus in North Dinajpur (49.31%) were denied their conventional rights of Holiday of Saraswati Puja in primary schools.

Incidentally, Muslims in Uttar Dinajpur has its largest population share as 49.92%. [The population % is given here  on the basis of 2011 Census report. But the projection reports suggest a 47% Hindu population in North Dinajpur and Muslims go up to 52% as present]. But, Hindus in this district are protective.

Seeing this trail of protest the Dist. Primary School Council compelled to publish a corrigendum being Letter No 29 dated 11.01.2018 where the Swaraswati Puja was included in the list mentioned in Serial 4. as a holiday on 22.01.2018. 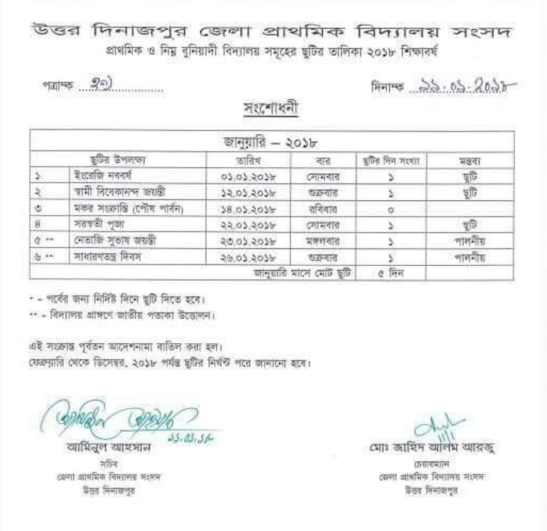 The Corrigendum, where Saraswati Puja is included again.

The two Muslim officials agreed the matter as a mistake. But, it is not understood how the two Jihadi heads failed to understand that such a nonsensical mistake may create a huge protest in the Hindu Society in Bengal where they are still in Majority and not the Minority as Malda, Murshidabad and Uttar Dinajpur districts!!!

But, it is obvious that when the Muslims will be in Majority in Bengal, such nuisance will be overwhelmed to end all Hindu holidays, festivals, rights and Hindu way of life eventually.

Courtesy: S Das and G Saha for sending the above circulars thru WhatsApp.