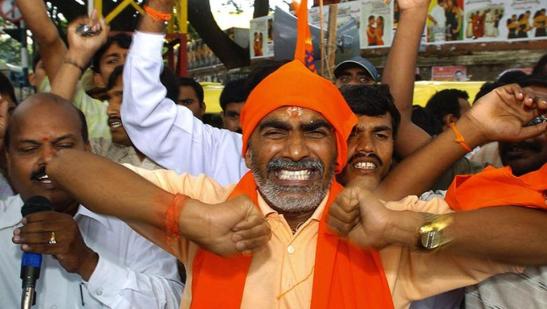 Workers of VHP and the Bajrang Dal have been tasked with door-to-door canvassing for the BJP.(AFP File Photo)

The BJP has focused on the murder of 23 RSS-BJP workers allegedly by the Popular Front of India.

In coastal belt of Karnataka, BJP banks on ‘Hindutva’ ahead of election.

Pampwell heads the Vishwa Hindu Parishad (VHP), an affiliate of the Rashtriya Swayamsevak Sangh (RSS), the BJP’s ideological parent, in three districts of poll-bound Karnataka and one of Kerala, known collectively as Dakshina Kannada

“We will see to it that Hindu candidates get elected this time,” Pampwell declares while taking stock of booth-level activities with 15 other workers. “Hindus suffered a lot under Siddaramaiah government.”

Pampwell was the state chief of Bajrang Dal, another affiliate of the RSS, till recently. He claims to have a group of about 3,000 active workers of the VHP and the Bajrang Dal who are toiling to ensure victories for Hindu candidates in a communally charged region that the state’s ruling Congress swept the last time.

The day starts early for these workers. A small group of 5-6 workers is formed and each of them assigned the task of knocking at the doors of about 250-260 houses every day.

What do they tell voters? “Hindutva should win to ensure peace. Else there will be murders of Hindus and incidents such as love jihad that were rampant in the last five years,” Pampwell says.

There has been discontent among some RSS workers over the BJP’s ticket distribution. Supporters of Satyajit Surathkal, the former convener of Hindu Jagaran Vedike, a local Hindu outfit, held protests over him being denied a ticket. Anger also erupted in Puttur after Arun Putthila was denied a ticket. Both were backed by local RSS stalwart Kalladka Prabhakar Bhat.

Read also: Hindutva, not our candidates, will win BJP the elections, says Eshwarappa.

This disenchantment can hurt the BJP and firefighting has already begun with the party’s joint general secretary BL Santosh, an RSS leader now with the BJP, working overtime.

“The RSS wanted some candidates in that region, but we have to factor in several aspects while deciding candidates. The best candidates have been chosen,” a BJP functionary in Delhi said on the condition of anonymity.

Pampwell echoes that sentiment. “Everything is past now. In our organisation, individuals do not matter. Organisation is supreme,” Pampwell insisted.

Union minister and Dakshina Kannda MP Ananth Kumar Hegde is the Hindutva poster boy in this region and there is talk of him becoming the chief minister in case of a fractured verdict on May 15. Uttar Kannada MP Nalin Kumar Kateel, a two-time-parliamentarian is also a RSS protégé.

The BJP has focused on the murder of 23 RSS-BJP workers allegedly by the Popular Front of India. “Four murders happened in Mangalore alone,” says Pampwell. The electoral battle promises to be intense.

Akhilesh Kumar runs a pan-shop at Collectors Gate in Mangalore. He migrated from UP three decade ago. “We want the BJP to return to power. The present government is seen as working only for one community,” he says.

Not everyone agrees. “The BJP thrives on religious divide. We will not vote for them,” Abdul Qadir, who runs his own bakery on the outskirts of Mangalore. “There is peace in Mangalore in the last five years,” said Dr S Kakkilaya, whose father BV Kakkilaya was a veteran communist leader of the region. “The five years BJP rule brought bad name to Mangalore.”

The Congress swept Dakshina Kannda district in 2013 election, winning seven out of eight assembly seats and losing one by a margin of 1,373 votes. The BJP won just one out of five seats in Udupi too. That was an election fought in the backdrop of controversy over attacks by a Hindu fringe group, Sri Ram Sene. The BJP was also struggling with factionalism and charges of corruption.

Muslims account for 24 % and Christians 8% of the population in the Dakshina Kannda district. In a direct contest between the BJP and the Congress, the two communities prefer to vote for the latter. The BJP’s victory depends on its ability to consolidate Hindu votes– nearly 68% in this district. The Congress has two Muslim and one Christian candidates in three seats of Mangaluru city. The BJP has Hindu candidates in all three. “The BJP is wrong in hoping that all Hindus will vote for them,” says JR Lobo, the Congress’ sitting MLA from Mangalore City South. Coastal Karnataka will disappoint them on May 15, he adds.