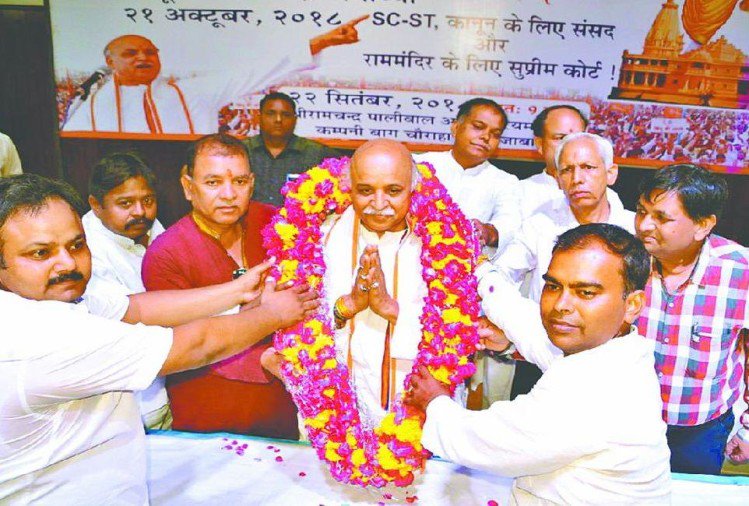 Togadia attacked Modi on unemployment of youths, peril of farmers and brutal killing of security personnel in Kashmir by Pakistan.

Togadia who came to Firozabad to campaign for construction of Ram temple in Ayodhya, under the banner of ‘Hindu Ahead’ and ‘Antarrashtriya Hindu Parishad’ (AHP), said, “During PM Manmohan Singh’s regime, Modi used to talk about ‘56-inch chest’, but now he is silent and is preparing for peace talks with Pakistan. I believe these barbaric attacks on our soldiers are happening because there is no politician’s son serving at the border.”

He said, the status of most favoured nation should be withdrawn, and a war should be declared against Pakistan “to teach them a lesson”.

He further said, “We made Narendra Modi the PM to help construct Ram temple, but instead his government is championing for Muslim women rights. He is now visiting mosque and bringing amendments in ST/SC Act to generate vote bank and dupe the general masses.”

On Friday last in Badaun, Hindutva hardliner Pravin Togadia Friday accused Prime Minister Narendra Modi of going back on his promises on the construction of Ram temple in Ayodhya and the withdrawal of Article 370, which gives autonomous status to Jammu and Kashmir, rehabilitation of Kashmir Pandits  and Cow protection. “The country elected Modi for Ram temple, Article 370 and rashtravaad. But he started going to mosque instead of temple, advocated for the release of stone-pelters instead of working for the security of jawans and forgot Ram temple,” Togadia told reporters in Badaun.

“He was sent as an advocate of Ram temple but Modi ji became the lawyer of wives of Muslims,” he said, apparently referring to the ordinance brought by the central government on Wednesday to ban the practice of instant triple talaq.

Under the ordinance, giving instant triple talaq will be illegal and attract a three-year jail term for the husband. Togadia, who had been with the VHP for more than three decades, has been a vocal critic of Prime Minister Modi and the BJP leadership.

Togadia blamed the government on its economic policies and also on matters related to India’s security. He said the farmers and the youth are faced with immense problems and the lives of jawans are not safe.

Calling Pakistani troops’ act of gouging out eyes of Indian soldiers intolerable, he said those who talked about having a “56-inch chest” are silent now. He asked people to remain vigilant towards the country’s security. Asked about 2019 Lok Sabha elections, Togadia said there is still some time for the poll but stressed that those who have been voted to power should be given a chance to correct themselves. He said whichever party is voted in 2019 will become the alternative for people.

In a programme of AHP in Bareilly, Dr Togadia criticized BJP to make their Party Head Quarter Building in Delhi at the cost of Rs 500 crores, but they did not take any initiative to take arrangements for Ram Temple in Ayodhya in order to keep Ram Lala free from staying in a tent house very miserably.